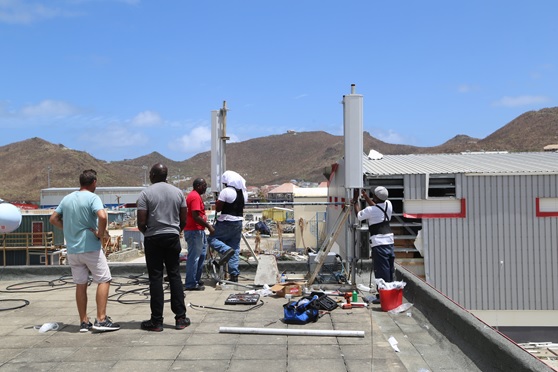 Photo caption:Temporary cell site constructions such as this one on top of TelEm Group’s Earth Station on Pond Island is helping with vital communication links in Sucker Garden, Philipsburg and further afield days after the passage of hurricane Irma.

According to the two top officials, Technical staff were out within hours of the passage of the storm to assess damage and begin salvaging whatever equipment they could.

The earliest assessment was relayed by the CEO to Government via the Emergency Operations Center and also to the general public via a radio announcement soon after the passing of Hurricane Irma.

“Fortunately for many people, a good part of our telecommunication infrastructure lies underground so during and after the passing of Hurricane Irma some people could call friends and families overseas and also could continue to monitor weather conditions and send out reports via the internet,” said Mr. Dupersoy.

At the time he assured the general population that since some communication was available, priority was being given to securing the well-being of personnel and their families, 20 of whom had reportedly lost their homes and were taking shelter elsewhere.

Mr. Dupersoy said an extraordinary meeting of the Supervisory Board of Directors with TelEm Group management was convened on September 14th to again assess the status of the telecommunication infrastructure after Hurricane Irma, the status of company personnel following the storm and also TelEm Group schedule and level of restoration to businesses, banks and other vital locations.

During the meeting with the Supervisory Board of Directors, a Board resolution was also drawn up approving an emergency Hurricane restoration fund from which management can help return the company to pre-hurricane Irma conditions.

“I am very grateful to all the TelEm Group staff who have gone above and beyond to restore services to many areas in very creative and extraordinary ways,” said Mr. Dupersoy.

Chief Technical Officer (CTO) Mr. Eldert Louisa, said despite the fact that much of the company’s telecommunication network is underground, there was still some major issues in the Dawn Beach and Guana Bay areas which were still completely out by the 16th of September.

Mr. Louisa also said other affected areas included: Dutch Quarter, where much of the telecommunication infrastructure is still overhead, and where the Outside Plant Network is also completely out as of September 16th; Betty’s Estate, Saunders and Mary’s Fancy, also overhead, were down and Point Blanche area was also affected.

“Our landline fixed network was 60/70% operational because the majority of the network is underground, but here and there we have lines that may be out because of faulty connections and wiring, which will gradually get fixed when we re-open the Helpdesk to give further assistance to customers, “ said Mr. Louisa.

He said when customers contact the Helpdesk to report outages, technicians will be able to direct more specific help to them and to affected areas where they can troubleshoot and resolve individual issues.

The CTO said at the weekend that he was busy putting together a list of additional manpower needs for the CTO to that TelEm Group can get expert assistance from other carriers overseas who are offering help.

“For sure we have to bring in specialist help for the mobile and fixed network,” said the CTO.

“Our goal has always been to make our telecommunication network more robust so that we can recover quickly after an incident such as this, so I am satisfied at the pace of recovery so far,” continued Mr. Louisa.

Like the CEO, Mr. Louisa is also full of praise for the company personnel who have shown their professionalism prior to the passage of the storm and after the passage of Irma, for their input and effort to ensure that the network is restored fully as soon as possible.

Regarding the possible passing of Hurricane Maria, close to St. Maarten on Monday evening, Mr. Louisa had once again urged all members of staff to prepare again for another storm even though predictions were that Maria would pass South of St. Maarten.

For that passing, the company had secured its equipment once again as best as they could, especially from rain and wet conditions, but priority was for our staff to have shelter and to be safe, according to Mr. Louisa.

And meantime, TelEm Group’s Commercial Department, has been fully behind the company’s efforts to keep customers in communication with their loved ones on the island and overseas by providing free Emergency calling on the company’s fixed and mobile networks.

To assist customers with Top-up for their mobile phones, the company opened up a special sales window at its main location on Pond Island, selling Sim cards and Top-up cards, even though the damaged main office was officially closed to the general public.

“We have well over 15 Top-up locations now selling only $10 scratch cards and we will be putting the full listing in the daily newspapers and on our Facebook page for general information,” said Ms. Marten. She is advising customers that only TelEm Group’s Main Building on Pond Island will be selling Top-up and Sim Cards for the time being and until further notice.

“I want to thank the Commercial Team for all they have been doing on behalf of TelCell and TelEm Group customers, said the Manager, Marketing & Sales, Ms. Marten.

“By providing everyone with free credit at such an important time, we have demonstrated empathy with our customers at their time of need and we have also shown that we are a reliable telecommunication company,” said Ms. Marten. She says her staff is meantime making use of the hashtag #rebuildSXM in Facebook posts to further inspire and motivate customers and the general public.