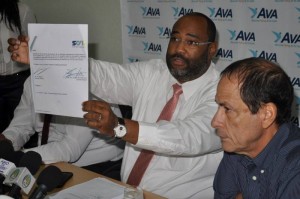 Hallucination airline or the next big thing?

St. Maarten News / By Hilbert Haar – Is Olivier Arrindell at it again? The controversy about his ghost airline AVA Airways is gaining momentum with the bitter exchange of opinions with businessman Michael Ferrier.

It all started with Arrindell’s claim that he had obtained a business economic permit from the government of St. Maarten for his airline. Ferrier noted in his letter to the editor this week that all he got was permission to establish an NV or a BV. There is no economic license and no airline operators’ certificate, Ferrier wrote.

He also questioned Arrindell’s claim of 10 years of experience in aviation and called AVA “a hallucination airline.”

Arrindell did not waste time preparing a response. In a lengthy letter that appeared on curacaochronicle.com he started throwing figures around about the incredible growth of the airline industry in the Caribbean and Latin-America – a story of “trillions of dollars” and the need for more than 30,000 new aircraft in the next fifteen to twenty years.

Winair “and its dream owner Michael Ferrier,” Arrindell wrote, “have no aviation policy or economic plan to take advantage of these opportunities.”

We wondered about those qualifications too. On LinkedIn, Arrindell’s profile portrays him as the “creative director” of Grace Aviation Holdings LLC, a company presumably based in Wilmington, Delaware.

The website of Grace Aviation is a special one: it just shows a page with a picture of tall buildings; somewhere in the air there is a tiny airplane. There is no information whatsoever about the company’s activities and there are no contact options either. It’s just a screen with a picture.

The LinkIn profile reveals more about Arrindell. He describes himself there as “the quintessential entrepreneur”: with “diverse interests and an extensive portfolio.”

Here is an interesting line from the profile: “Mr. Arrindell’s work as a political strategist helped him run a noteworthy, grassroots political campaign for the political office of the Island Council government of St. Maarten in the 2005/2006 election.”

First of all: there were no Island Council elections in those years. The elections took place in April 2007, but that could be an oversight.

In 2007, Arrindell was indeed somewhat involved in local politics, with the Democratic Labor Party (DLP) of Johan van Heyningen. The party won all of 69 votes in that election and Arrindell personally won 20 votes. So much for “a noteworthy grassroots political campaign.”

That’s not all: after the elections Arrindell was kicked out of the now defunct party, because, according to Van Heyningen, “he broke every rule in the book.”

Interestingly, Van Heyningen said in 2007 that Arrindell had claimed the following: that he had a degree from the University of Connecticut, that he was representing reggae artist Maxi Priest and that he had gone through the School of Corrections in Curacao – an institution that catered at the time to children with behavioral problems.

We checked the LinkedIn profile and indeed: Arrindell claims up to today that he has an associate’s degree in economics from the University of Connecticut School of Business.

Van Heyningen found out already nine years ago that this claim is false. “He was not registered at the University of Connecticut and he does not have a degree. When we confronted him he said he had to drop out due to financial constraints.”

Another claim on LinkedIn is that Arrindell after “leveraging his professional experience and business acumen” became one of the youngest members of the Caribbean American Chamber of Commerce and Industry in New York.

We checked with the relevant Chamber of Commerce, but up to press time we had not received verification of this claim.

As a managing partner of Oliwest Ltd., Arrindell appeared in 2009 in the media on a picture with Baldwin Spencer, the Prime Minister of Antigua and Barbuda when the country renamed the highest mountain on its territory, Boggy Peak, Mount Obama.

On LinkedIn, Oliwest is now described as “a political consultant firm”, but back in 2009, the temporary website of this company sang a different tune: “Oliwest Ltd. is an Antigua-based company that offers modern commercial complexes to the international and Antiguan business community. The Oliwest Ltd Business Complex balances safety, cutting edge features, and a positive atmosphere for all clients.”

On a website for entrepreneurs who are looking for financing, Arrindell portrayed his commercial complex again with a different name, this time as “a highly desirable, state of the art, 47 unit commercial business complex, Sky View Business Center.”

The catch line was in the last paragraph of Arrindell’s quest to find investors. In tantalizing language he promised investors fabulous returns on investment. “At Oliwest Ltd, we are open to all kinds of investors. We have designed very attractive programs and extremely desirable returns which are highly competitive. For an investment of $2.5 million US, Oliwest Ltd normally offers 30% APR over 30 months and 20% share in the project’s net profits. We are open to all negotiations and financial scenarios.”
Source: Today SXM The checkered past of AVA Airways chairman Arrindell