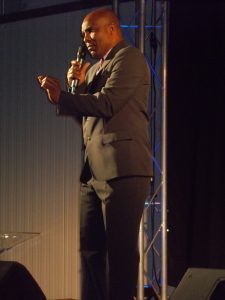 GREAT BAY – “A lot of times, when we hear the term domestic violence and fathering, we are quick to make the connection that it’s a bad father, or a father who doesn’t want to do what he’s required to do, but that’s not always the case,” Behavior Change Therapist, Wendell de Leon, said at the Fatherhood seminar at Harbour Village last Wednesday.

After a play that demonstrated how a father would want to see his daughter but was prohibited by the mother – causing the child to be both depressed and traumatized – the audience was left with a sense of enlightenment and wonder. When De Leon came onto the stage and spoke about fatherhood and domestic violence, people were nodding and agreeing that it is time for a change and that something must be done.

“In this line of work, what I’ve been doing over the years, I’ve seen fathers who have been passionate about doing what they are required to do, but I’ve seen a lot of obstacles in their way that prevented them – including themselves. We need to stop the blame game and the judgment, and open our eyes. There are fathers who are struggling to be involved, but there are a lot of things preventing them to do that. The issue of materialism has been promoted a lot of times, because when the father goes to visit, there’s always the question of what did you bring for the child. And a father may wonder ‘I don’t have any money, should I come or not?’ And that is what I want people to start to think about.

A family is supposed to represent a place that children and the parents are safe. But are we creating an environment that is safe for our children? Are we living in safe communities? We like to talk about the village raising the child, but the village can no longer raise the child because I don’t know who my neighbor is. I don’t know what he’s doing in his house. I don’t know if his house is safe. So you can’t be vexed with me if I’m being apprehension from allowing my child to integrate with other people. Truth be told, we need to be our brother’s keeper, and start creating stronger communities where our children can be safe.

There a lot of parents out there who feel like they know everything about parenting, but when you’re struggling with each other and you’re not having the best of relationships, can you provide for the needs of your children? Families are the building blocks of our society, but if the building block is flawed, what do you think will happen to the society? We are building structures that are inherently flawed. And if we take a look at basic needs of children – providing them with safety and security, as we feed them, clothe them, and give them a chance of proper education – we can create a decent human being – a human being who would be able to embody the principles of character that would speak to responsible and respectful behavior.”

De Leon continued to say that good fathers need to do something, instead of being bystanders and doing nothing – leaving “evil to continue to grow while good men stand and do nothing”. The role of a father, though as “important” as it is, has been “underrated for too long”. Fathers need to learn how to show their children, but especially their sons, affection because “it creates a balance in them and creates better men out of them, because when they have a relationship issue, they can sit have a dialogue and be able to empathize”. And even if a father doesn’t have the proper skills to interact with the child, he needs to do something and get the proper help he needs because the involvement of a father in a child’s like is “very fundamental”, and without it there can be some terrible effects.