Home Local News Zip line at Emilio Wilson Estate will be the steepest in the... 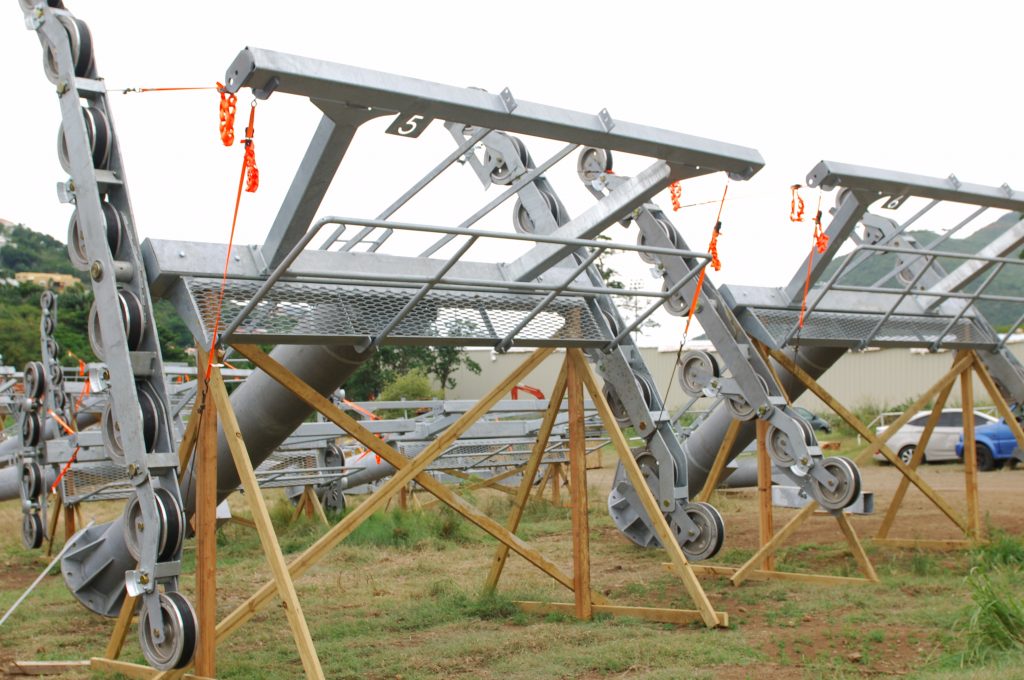 GREAT BAY– Just when everyone thought that the most spectacular landing, the largest cruise ship facility and the oddest national borders were the only things that made St Maarten stand out as a country, here comes the zip line at the Emilio Wilson Estate.

The zip line that is currently being installed will be the steepest in the world, with an almost 42 degree incline and that is something all residents of this friendly island have to be proud of when it’s completed.

St Maarten will now top the ranking ahead of the Zip Flyer in Nepal (High Ground Adventures) which has a maximum incline of 56 degrees in the number two spot followed by Slovenia which has a 58.6 degree incline on the ski flying hill in Planica. Costa Rica, Haiti and Jamaica also have zip line facilities.

With an estimated 55 chairs carrying four persons at a time, this spanking new tourist attraction has the capacity to carry 1.400 hundred passengers an hour and they are heading all the way up Sentry Hill where they will be in a position to enjoy a 360 degree view after navigating the peak along the series of balconies.

Photo caption: The main base at the lowest point is already in position as is evident in this image that was taken yesterday afternoon during a tour with Scott Swietanski, General Manager Rainforest Adventures. Photo Today / Milton Pieters

The Rain Forest Adventures Park which was originally estimated to be completed between April and May of 2017 is a multifaceted facility. The main attraction will be the unimpeded trips aboard the zip lines that will take those that like the outdoor adventure up the 850 meter trip.

Visitors will also have an opportunity to enter any of the many establishments on the project including the ‘Plantation House’ which is being rebuilt and will house a museum depicting the history of the island.

“The view from up there is spectacular and there will be a series of scenic platforms, people can also ride the easy zip lines that will stop at an intermediate station. Or if they are feeling like doing more, they can ride all the way to the top,” said Scott Swietanski, the general manager at Rain Forest Adventures.

From a 20 meter elevation, the zip line will rise to 330 meters at the highest point, however there will be more than the eyes can see after getting to the intermediate station. “After getting off, people can also ride down the slope on artificial grass aboard an inflatable tube. To aid the movement of the downward motion, we will ensure that the grass is always wet to give it that slippery effect, this is going to be a real adventure park” Swietanski added.

According to Swietanski, it’s going to take about 24 minutes from the lowest to the highest point and stressed the point that there will be no rider participation. All the persons have to do is just sit back and enjoy the rides and the views.

Anyone passing by the Emilio Wilson Estate would have noticed that a lot has been taking place and Swietanski said that they are on schedule for the July 1 opening. He admitted that they can be affected by the weather conditions however they are confident that it will be opened on time.

He noted that on the completion of the project, he has been contracted to stay behind to train the local staff. “Currently we have about 60 local staff and that can take between three to five years to get them to where we want them to be.”

Currently, work is being done on the 15 ski lift towers that will be used to connect the cables which are connected to the 57 chairs. He said that on November 5, a special helicopter which will arrive on the 3rdwill be used to pour 150 yards of concrete. After the concrete has dried properly, the helicopter will be used again to lower the towers into position.

“So from here to the highest point, it will take 24 minutes and just 25 seconds, but we have easy ones for the people that are poor at heart. It also has an automatic cantilever breaking system which flattens out as it comes down only to be stopped by 200 feet of springs,” he noted.

Restoration of the natural habitat at the Emilio Wilson Estate is high on their agenda in that regard, Rainforest Adventures will be replacing the invasive species with native species.

With regards to its construction, he said that it was designed to withstand a wind force load of 200 miles per hour. However, in case of a hurricane, the chairs will be removed and the cables will be lowered to the ground.

But while the facility will be catering for the influx of tourists, the residents on the island will also be able to enjoy the facilities at a reduced price. “Even when the park is closed at 5 in the afternoon, we plan on having a place for fine dining experiences under the beautiful ambience of the vegetation and lights.”

To add to the already impressive layout, a pond is being dug where tilapia will be placed and while the tourists will be arriving there by bus and taxis, the residents will have adequate space in which they can park their vehicles.

Photo caption: This is just one section of the intricate pieces of vegetation at the Emilio Wilson Estate that will not be touched instead they will only be adding to its natural effect. Photo Today / Milton Pieters

Top photo caption: Waiting for removal, ski towers lie on their side in the open space at the Emilio Wilson Estate. Photo Today / Milton Pieters