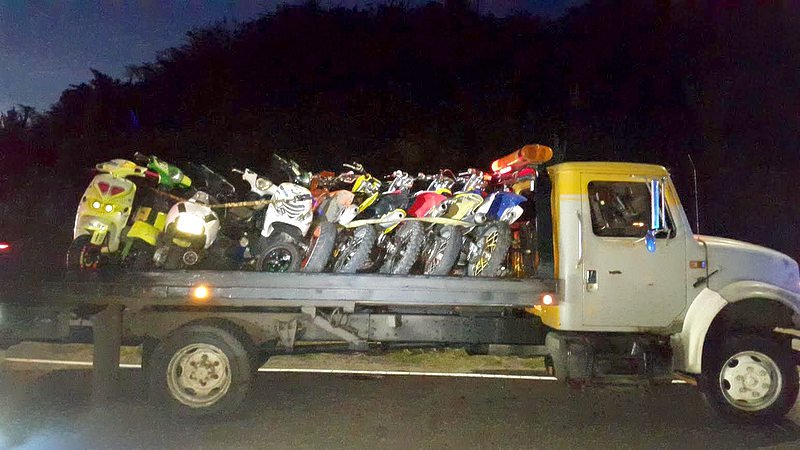 COLE BAY–Numerous calls flooded the Police Central Dispatch on Sunday afternoon informing them that a large group of motorcycle and motor-scooter riders were racing recklessly and causing a great deal of unnecessary noise, disrupting the peace and causing public disorder in Philipsburg and surrounding areas. These riders also were not wearing proper safety gear such as helmets.

Police patrols immediately went on the search for the riders. Several police patrols involved in this control succeeded in stopping a large number of the riders at the lookout point at the top of Cole Bay Hill, commonly referred to as “Harold Jack’s place.” The rest of the riders, when they noticed that they were being followed by police, turned around and escaped. Traffic on A.J.C. Brouwer Road was backed up for some time as a result of this control.

A total of 11 motor-scooters and motorcycles were confiscated because of the operators’ failure to provide any legal documentation. The riders were all given fines for not having documentation for their vehicles, driving without a licence, reckless driving and operating a motorbike without any helmet.

One of these riders also was arrested and brought to the Philipsburg police station for payment of an outstanding fine totalling NAf. 625. After paying his fine, he was released later on Sunday.

All confiscated motor-scooters and motorcycles were taken to the Philipsburg police station for safekeeping until the owners can produce all necessary documentation.