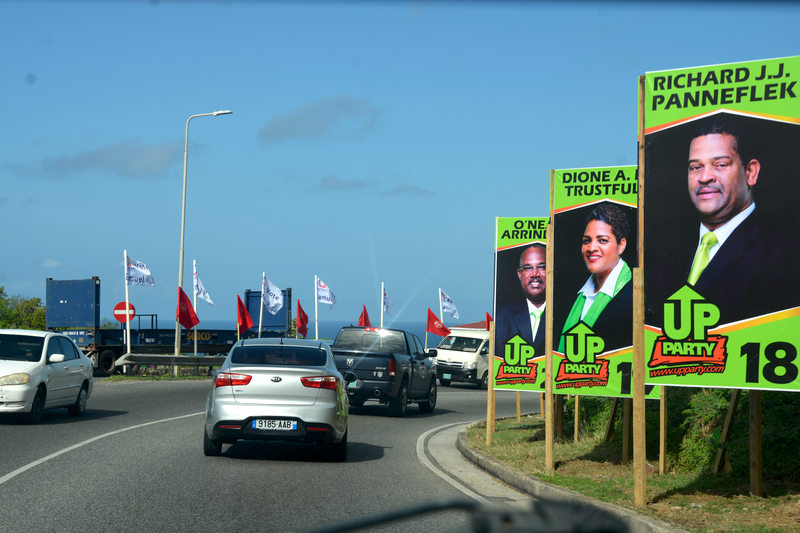 ~ Country will see at least one new MP ~

PHILIPSBURG–A grand total of 126 candidates from nine parties are seeking a place in the fifteen-seat Parliament in an election that definitely will produce one new Member of Parliament (MP). That one new MP will fill the seat of incumbent MP Johan “Janchi” Leonard of the United People’s (UP) party who is not contesting the September 26 election. The other 14 sitting MPs are seeking re-election.

Based on the tally, there are some nine candidates for each seat in Parliament. The tally also represents 37 more candidates than in the 2014 Parliamentary election. Only 89 candidates from six parties were in that race, three less than for this snap election. There were 69 on the ballot for the 2010 early Island Council election (the resulting Island Council members from that election became the country’s first MPs on October 10, 2010, when country status was attained).

Parliamentary hopefuls will have to court the 22,302 registered voters to win the chance to sit in Parliament House.

Of the candidates in the race, 39 from five parties will have to wait to see if they actually will have a spot on the ballot come Election Day.

Helping Our People Excel (HOPE), St. Maarten Christian Party (SMCP), One St. Maarten Party (OSPP), People’s Progressive Alliance (PPA) and St. Maarten Development Movement (SDM) are newly-registered parties and do not have a seat in the current Parliament. Those lists need to be endorsed by 146 voters, today, Tuesday, at the Civil Registry on Pond Island from 9:00am to 4:00pm. The number of signatures needed represents one per cent of the valid ballots cast in the 2014 Parliamentary election.

United People’s (UP) party, Democratic Party (DP), United St. Maarten Party (US Party) and National Alliance (NA) all have seats in the current Parliament and therefore do not need to have their lists endorsed by voters.

All nine parties submitted their slates of candidates to the Main Voting Bureau in Dr. A.C. Wathey Legislative Hall on Monday. The Bureau was represented by Chairman Jason Rogers, Tamara Richardson and Patrice Gumbs Jr.

UP, headed by MP Theo Heyliger, was first in the door with its slate of 23 candidates, the maximum allowed by electoral law. The day was rounded off by the presentation of full slates by US Party, led by MP Frans Richardson, and NA, headed by Prime Minister William Marlin. UP and NA also had full slates in the 2015 election. US Party has increased number of its candidates from 15 to 23.

The second party to put in its list was HOPE of radio personality Mercedes van der Waals-Wyatt with a three-person slate.

Next was SMCP, headed by retired pastor Wycliffe Smith, with a list of nine candidates.

OSPP, the party of former Island Councilman Leonard “Lenny” Priest, has a slate of seven candidates.

PPA, led by former MP Gracita Arrindell, has a list of 14 candidates.  Facilities Manager Benjamin Ortega handed in a list of six candidates for his SDM.

And, the country’s oldest party DP has a list of 18 candidates in the race for Parliament. This is one less than the party had in the 2014 elections.

The Main Voting Bureau will review the nine slates in a closed session on Friday. The lists will be checked to ensure submitted documents comply with the electoral regulations. Parties with errors, if such are found, will have an opportunity to correct the errors. Parties will be informed of the completeness of their lists and supporting documents on Monday.

The Main Voting Bureau will sit in a public session on August 22 to assign colours and list numbers to the slates. The numbers will determine where on the ballot each party will be placed along with the background colour of its list. The top of each list will have a photo of the number one candidate.

Three of the lists are headed by incumbent MPs – Heyliger (UP), Wescot-Williams (DP) and Richardson (US Party).

NA has its four MPs on the slate along with three of the seven ministers – Marlin, Silveria Jacobs and Richard Gibson. US Party has three MPs – Richardson, Lake and Matser. Wescot-Williams is the only MP on the DP slate with lone minister Emil Lee. The three other ministers – Angel Meyers, Ingrid Arrindell and Edson Kirindongo – are not candidates on any slate.

Women represent the majority of registered voters, but the nine slates reflect only 35 women of the 126 candidates. This is a slight increase of seven women since the 2014 polls.

OSPP has a slate of only men. DP, one of three parties led by a woman, has the most women (seven) on its slate. UP and US Party each have six women. UP has its first woman candidate, MP Tamara Leonard, at number three while US Party has businesswoman Anna Rabess-Richardson at number two.

PPA, another woman-led party, has five women candidates, as does NA with Jacobs, the party’s deputy leader, at number two on the list. SMCP has three women on its slate. HOPE is headed by a woman and has one other woman candidate. SDM has a lone woman on its slate. The “fairer sex” number 11,488, more than half of the total voter count of 22,302. The number of women voters is up from 11,090, the tally from two years ago when they also formed the majority of voters.

As in the last election, there are two brothers contesting the election on two different slates. This time they are MP Silvio Matser on the US Party slate and his older brother Raymond on SDM. In 2014, it was the De Weever brothers with Cornelius on DP and Miguel on UP. Cornelius was elected in that race.

According to Article 52 of the Constitution, MPs may not be related by blood closer than the second degree. Also, spouses may not be MPs at the same time. If related persons covered by the provisions are elected at the same time, only the one obtaining the largest number of votes shall be admitted and if the number of votes is the same, the oldest of the persons shall be admitted. If the ages are also the same in the last-mentioned case, the issue shall be decided by lot. The Matsers do have a direct cousin on yet another slate – Jorien Wuite (DP). However, although they are children of two siblings, they are considered under the law as related to the fourth degree.

Nomination Day, the second in two years due to the current Parliament term ending two years early with a snap election, was more toned down than in the past. Only three of the four parties currently in Parliament arrived to hand in their lists with a parade.

DP candidates and supporters walked over from Parliament House to the Hall clad in red and carrying flags. They stopped to pay respects at the spot on Front Street where Police Officer Gamali Benjamin was mortally wounded a year ago. Before entering the Hall, Wescot-Williams and others placed flowers at the statue of DP co-founder Claude Wathey.

UP had a green parade through town in the afternoon. The parade stopped to pay respects to Benjamin, the first police officer to be killed in the line of duty.

US Party also had a parade complete with stilt-walkers and each candidate in a jeep. The blue party also paid respects to Benjamin.

NA’s candidates and supporters arrived at the Hall with music and chanting. After the list was handed in, the party leader called for a moment of silence for Benjamin.