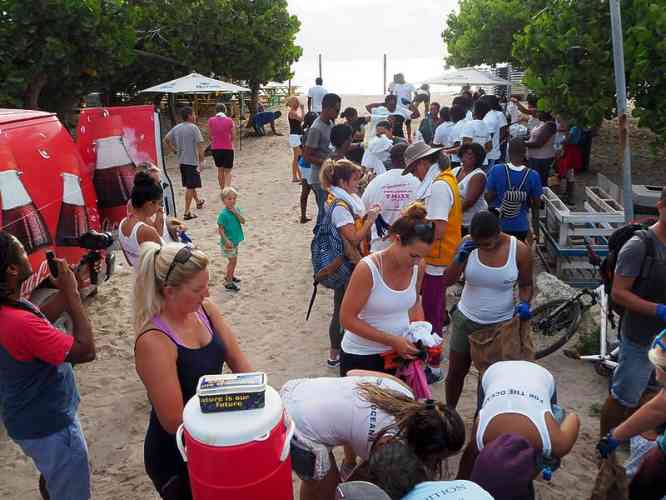 MULLET BAY–A whopping total of 1,280 pounds of trash was harvested from Mullet Bay Beach by some 100 volunteers on International Coastal Clean-up Day, September 15. The clean-up was organized by Nature Foundation in partnership with Corona beer.

The unexpectedly large turnout of volunteers saw the weighing station constantly occupied. This led to some people skipping the weigh-in. Due to the skipped weigh-in, definitely more trash was collected than was weighed, said the Foundation.

The Mullet Bay hoard is the highest amount of trash collected since Nature Foundation started the Trash Tracker method at the beginning of this year.

“On Saturday, we prevented more than 1,000 pounds of trash from entering our oceans. All little bits help in the fight against ocean pollution,” said Foundation Project Officer Melanie Meijer zu Schlochtern.

Some nine million tonnes of plastic enters the world’s oceans each year, a rate that has increased 100 times in the past 40 years. If current trends continue, there will be more plastic than fish in the ocean by 2050.

This International Coastal Clean-up activity was part of the Foundation’s Reduce and Reuse St. Maarten project aimed at fighting plastic pollution, and teaching and encouraging adults, children and businesses to reduce plastic waste output and to clean up the environment.

Part of the project is to lobby for a ban on single-use plastic, as awareness on its own will not reduce the massive amounts of waste created and left behind on beaches and in the environment.

“As we are all part of the pollution problem, we can be part of the solution, which means we are also capable of changing things for good – it starts with a simple beach clean-up and hopefully will be part of our everyday concerns. This is why the success of this event matters a lot,” said Corona St. Maarten Trade Marketing Coordinator Jade Ladal.

Volunteers from, among others, CC1, Rotary Club, Rotaract, and Les Fruits de Mer were trash collectors at the clean-up event.