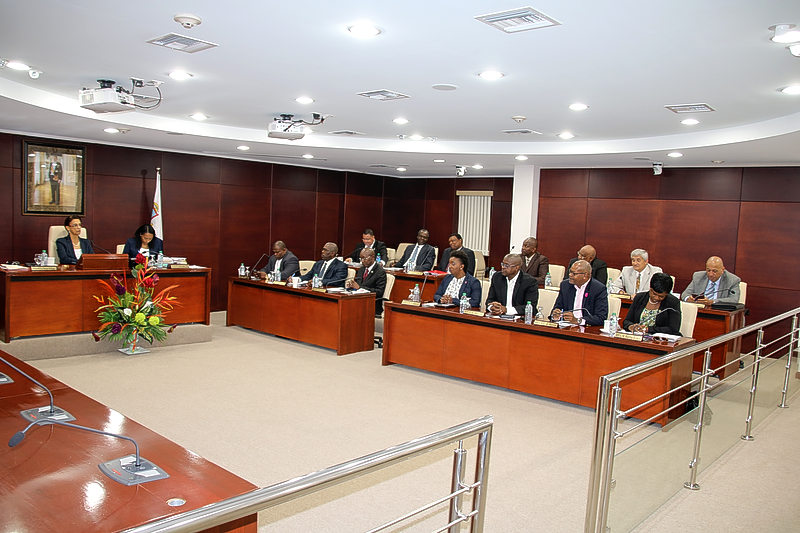 PHILIPSBURG–The credentials of the fifteen Members of Parliament (MPs) who were elected during the September 26 parliamentary election were approved by the outgoing Parliament on Friday and the MPs have been admitted to the legislative body. They are expected to be sworn in on Monday, October 31, and have their first sitting.

The incoming MPs were admitted after a committee comprising sitting MPs George Pantophlet (NA), Leona Marlin-Romeo (independent) and Dr. Lloyd Richardson (UP) vetted their credentials and found them to be in order. Parliament then approved the credentials and accepted the MPs to the House.

A number of incoming UP and NA MPs are expected to take up positions in the new Council of Ministers, paving the way for their respective parties’ next-highest vote-getters to eventually fill the vacant parliamentary seats.

Chairperson of Parliament Sarah Wescot-Williams said Governor Eugene Holiday, the Chairman of the Central Voting Bureau and the 15 MPs who had been admitted would be notified immediately of the approval of their credentials and their acceptance to Parliament.

At the end of the process, MP George Pantophlet congratulated the incoming MPs and said it was important for them to understand their responsibility as MPs.

“They are the representatives of the people of St. Maarten,” he said, adding that the past six years of having a “learning experience” was coming to an end. He said the public expected authorities to put their differences aside and govern. He wished the incoming MPs success as they “manage the people’s business” and urged them to ensure that the decisions they take are in the best interest of St. Maarten.

Outgoing MP Johan “Janchi” Leonard said the incoming MPs had “a very difficult task” ahead of them, because St. Maarten “really needs a stable Government” as a country heavily dependent on tourism. He is confident that the current NA/UP coalition Government of 10 incoming MPs will achieve the stability needed. “We should have confidence in the Government and also in the people of St. Maarten,” he said.

He thanked the persons who had placed their trust in him during his six years serving as an MP under the UP party and noted that he had made a personal decision to go on pension. However, he plans to continue following political developments closely and said he would be available to render advice and assistance if needed.

“It is important that St. Maarten has a stable Government. It means a lot to the outside world,” he said.

His wishes are for the incoming Government to focus on improving the standard of living for the elderly, address poverty in the country and focus on issues such as education and attracting students to return home.

Independent MP Cornelius de Weever wished the incoming MPs “best of luck” and told them that working for St. Maarten should be their ultimate goal.