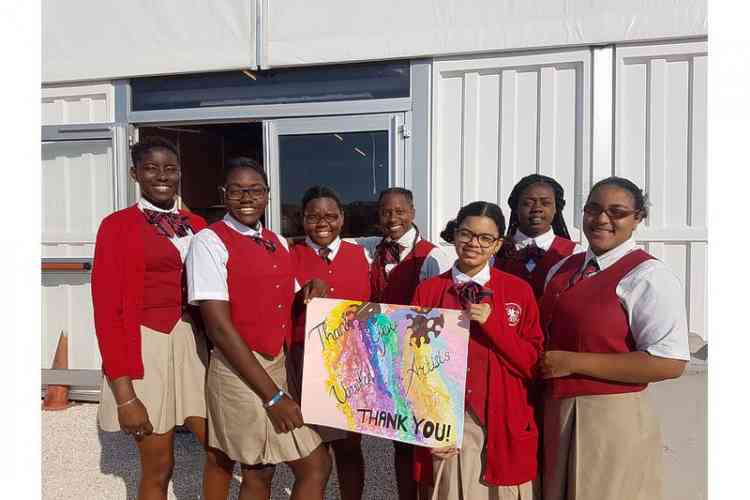 Some of the CBA students whose uniforms were replaced expressing their gratitude to the Foundation for the donation.

PHILIPSBURG–United Artist Groningen Foundation in the Netherlands recently transferred 1,500 euros to Charlotte Brookson Academy (CBA) for the Performance Arts to assist in the replacing of students’ school uniforms that were destroyed during Hurricane Irma in September last year.

The funds were used to purchase nine uniforms and cardigans for students who had lost their uniforms when the storm damaged their homes.

According to CBA, several weeks after Hurricane Irma hit the island, Foundation representative Glenn Gressman contacted CBA board member May Ling Chun. Gressman informed Chun that the Foundation was in the process of organising fundraising events and it wanted the proceeds to be donated to worthy projects in St. Maarten to alleviate the suffering caused by the hurricane.

Chun conveyed this information to the CBA management, which proposed that the Foundation donate towards the replacement of students’ uniforms that were lost when Irma destroyed their homes.

The CBA board and management said in a press release that they are extremely grateful to United Artist Groningen Foundation members for donating their time and talent to raise funds for students.

“It is touching that persons in the far-away Netherlands have opened their hearts and pocketbooks to assist our students (in) St. Maarten. To those persons we send warm and sunny greetings from the Charlotte Brookson Academy of the Performance Arts (in) St. Maarten and we say, ‘Thank you … for your kindness and generosity,’” CBA said.