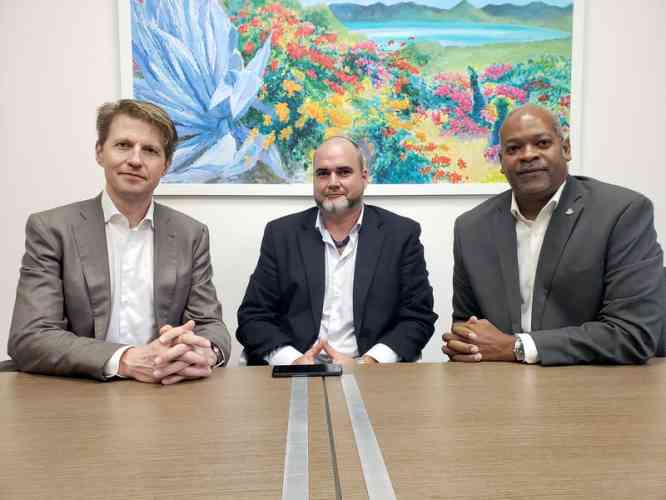 PHILIPSBURG–Netherlands Minister of Legal Protection Sander Dekker and Minister of Justice Cornelius de Weever toured St. Maarten’s detention facilities on Thursday for Netherlands officials to witness first-hand the improvements to the facilities. Parties agreed on 16 containers being shipped from the Netherlands to St. Maarten to house inmates at the Pointe Blanche prison to improve the detention facility’s capacity.

“We have agreed on containers from the Netherlands be shipped to the island soon to improve the facilities of the Pointe Blanche prison. The minister also visited the Philipsburg holding cells and Simpson Bay holding rooms. The discussions held with the minister were fruitful. I encouraged the minister to come to St. Maarten months ago and see first-hand the improvements made by the Justice Ministry,” stated De Weever during a press conference Thursday.

St. Maarten’s Progress Committee recently informed the Dutch government that it should make a profound effort, through dialogue, to arrive at a joint structural solution for the Pointe Blanche prison. Dekker said he had noticed the improvement of the facilities and hopes that St. Maarten continues to work on completing all plans of approach agreed on by both governments years ago.

Noticeable to Dekker were repairs to the prison roof and lights, the new reception area outside the facility and the new control system for persons entering the facility. “I also saw security near the wall of the prison and operational cameras monitoring the facility,” he said Dekker. Discussions also focused on improving staffing at the prison.

The containers will house two prisoners as parties continue to look at the possibility of building a new state-of-the-art prison. When asked about financing by the Netherlands for the rebuilding of the prison, Dekker said the Netherlands has been assisting with technical expertise.

This is not the first time St. Maarten was promised container cells. Then-Dutch Minister of Home Affairs and Kingdom Relations Ronald Plasterk provided a written update on the strengthening of law enforcement in the Dutch Caribbean countries to the Second Chamber of the Dutch Parliament in 2016, in which he informed the members that Aruba, Curaçao and St. Maarten would be taking over 33 prison-cell containers from Bonaire early 2017. Information on the individual numbers per country was unavailable at the time.

Then-Dutch Minister of Security and Justice Ard van der Steur offered the prison-cell containers, which can hold 84 inmates in total, to his colleagues, the Ministers of Justice of Aruba, Curaçao and St. Maarten, during the Judicial Four-Party Consultation JVO held in Aruba early 2016.

According to Plasterk in 2016, an agreement was made with the three countries that each would take over some of the 33 cell containers. No specific number per country was mentioned in the letter.

The Bonaire penitentiary is the largest prison in the Caribbean Netherlands and holds inmates from St. Eustatius and Saba also.