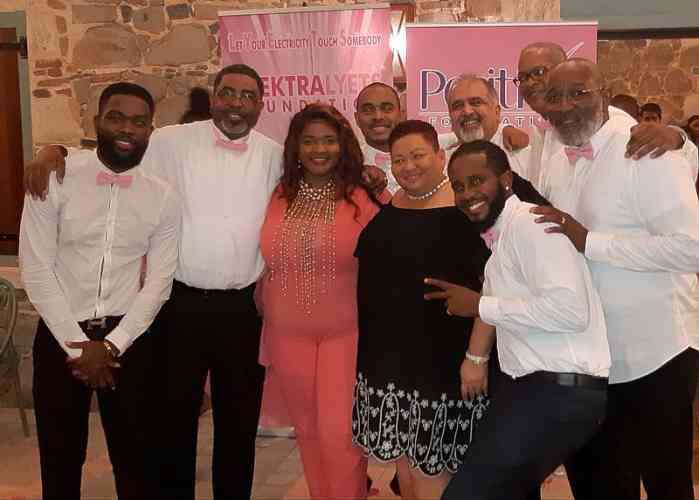 CUL DE SAC–Some 160 persons were waited on by local “celebrities” at the Elektralyets and Positive Foundations’ Celebrity Waiter Benefit Gala at Emilio’s on Saturday evening.

The event was coordinated by the two foundations in collaboration with Grisha Heyligar-Marten.

The buffet dinner for the event was prepared by Chef Dino Jagtiani and his team while live entertainment was provided by Destiny Band.

Attendees had an opportunity to bid on items from various businesses that donated products such as watches, jewellery and travel vouchers.

The fundraiser generated more than US $7,000 and the top celebrity waiter title went to De Weever.

The evening was interactive with games such as mould the tatas, celebrity balloon pop and bling your bra.

Elektralyets Foundation President Mercedes “Elektra” van der Waals-Wyatt thanked patrons, participants and businesses that contributed to the event to make it such “a grand success” and was happy to see that many persons are breast aware in the community. “The [breast cancer awareness – Ed.] events have mushroomed immensely in 2018 and I am happy that many persons are getting the resounding message to feel it, find it, fight it.”

Positive Foundation President Shelly Alphonso said she was impressed by the creative decorations and with the celebrity waiters. “Early detection saves lives,” she said adding that through generous donations the foundations are able to produce information booklets, shower guides, hold workshops and host new projects.

The foundations thanked Norman and Su Wathey for hosting the event and CC1 which was the major breast cancer awareness sponsor for the welcome drinks and all the contributors that made the evening “a huge success.”