PHILIPSBURG–The Volunteer Corps of St. Maarten VKS continues to grow and flourish in the eyes of Government and the public. The military organisation celebrated nineteen years on Saturday afternoon.

A special ceremony was held in front of the Government Administration Building with police and uniformed organisations from Anguilla and the French side of the island, among others. Fifteen recruits were promoted to the rank of soldier while eight soldiers climbed the ranks of the organisation, two to the rank of Corporal, one to Sergeant, three to Sergeant Major, one to First Class Lieutenant and one to Captain.

The fifteen recruits were read the code of ethics and sworn in by head of the VKS Commander Antonio Rogers. 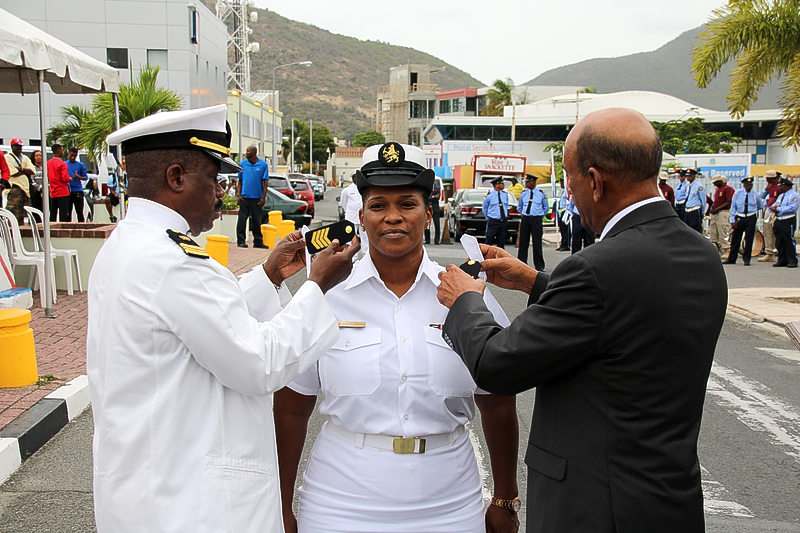 VKS was formed on June 28, 1997, as a military organisation and boasts of its involvement in the police, prison, Coast Guard and EMS systems. Commander Rogers during his speech directly addressed Minister of Finance Richard Gibson on receiving the VKS subsidy on time and hoping for something additional for the organisation before Christmas.

“These promotions we did today came with a struggle, but it was needed in order for the organisation to grow. I am proud of every member of the VKS and I hope that the Government will give us the land needed for building our new headquarters,” said Rogers to the guests and soldiers.

Gibson, representing Prime Minister William Marlin who is off-island, thanked the soldiers for their service to St. Maarten and said the VKS was important to the island’s safety.

A service at the Roman Catholic Church on Front Street was held to close off the ceremony on Saturday. Uniformed services marched through Philipsburg prior to the official speeches.