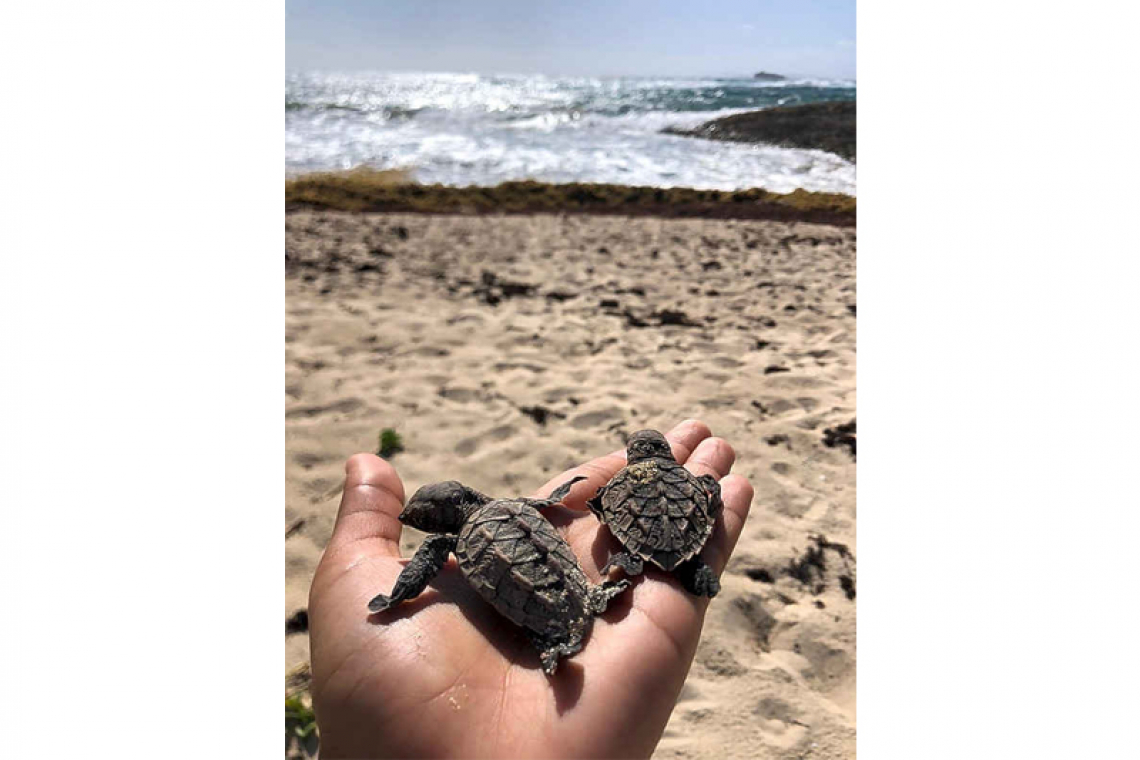 GIBBS BAY–St. Maarten Nature Foundation found two dead hawksbill sea turtle hatchlings on Gibbs Bay Beach in the beginning of April, which may be an indication that some sea turtles are laying eggs outside the traditional nesting season.

The hatchlings were found together and based on the state of decomposition it appears they died of natural causes several days before being discovered. It is not unusual for hatchlings to become dehydrated and die before reaching the ocean, said the Nature Foundation.

Sea turtle eggs incubate in the sand for around 60 days before hatching, which means the mother of this clutch laid her eggs in late January. The sea turtle nesting season in this region usually runs from April to November.

“This finding may be evidence of a late nesting season, as more late nests were recorded in December, or simply an individual outlier from last year’s season. Hawksbill sea turtles (Eretmochelys imbricata) are one of three sea turtle species that nest on St. Maarten’s beaches. They are critically endangered and protected locally and internationally,” said the Nature Foundation in a press release on Thursday, April 29.

According to the foundation, there has been evidence of late nesting in recent years, with some turtles coming ashore to lay eggs as late as February.

Why sea turtles are nesting later than usual on St. Maarten beaches is uncertain, said the Nature Foundation. Some coastal areas in the United States (US) and Mexico have seen the same phenomenon.

Although there has not been extensive research in this area, the theory is that sea turtle nesting patterns may be changing because of above-average land and sea temperatures caused by climate change.

“The temperature of the sand plays a significant role for all sea turtle nests,” said the Nature Foundation. “Warmer temperatures mean that most of the eggs will end up being female, while cooler temperatures result in male hatchlings. This means as our global temperatures increase, we could see changes in the sea turtle population that would make it even more difficult for them to successfully reproduce.”

However, because of the dearth of scientific literature on sea turtle nesting changes, it is also plausible that it was this individual female’s choice to nest late, said the Nature Foundation.

A hawksbill sea turtle laid eggs on Gibbs Bay Beach in December 2020, a month after season’s end. The foundation said this may be the same female that laid the clutch of the dead hatchlings.

“Sea turtles often return to the same beach to lay their eggs if the conditions are favourable, and individuals may nest at different times outside the regular season. Hawksbill sea turtles generally lay between three and five separate clutches per season, averaging between 130 and 160 eggs – more than any other sea turtle species,” said the Nature Foundation.

Because of these documented late nesting activities, the foundation encourages residents and visitors to still look out for sea turtle tracks, nests and hatchlings outside the season. It is prohibited by local law to harm, handle or kill sea turtles, or to disturb their nests.

“Individuals can protect sea turtles’ lives by remaining five metres away from any nests and hatchlings, and 15 metres away from actively nesting turtles. The Nature Foundation also discourages individuals from operating heavy vehicles on the beach at any time. Sea turtle nests and eggs are very fragile, and too shallow to prevent damage from vibrations and trampling,” said the foundation.

Sea turtles avoid nesting on beaches that are littered, brightly lit and noisy. The Nature Foundation thus encourages persons to keep beaches clean, and to fill in holes dug in the sand because hatchlings can become trapped in sand pits.

“Removing recreational items and turning off or dimming lights on the beach at night can help keep sea turtles from turning away from beaches,” said Nature Foundation.

Persons are requested to contact the foundation if they encounter sea turtle tracks, nests or hatchlings on the beach. Persons can also volunteer to patrol St. Maarten’s beaches at night as part of Nature Foundation’s ongoing project to document sea turtle nesting activity.