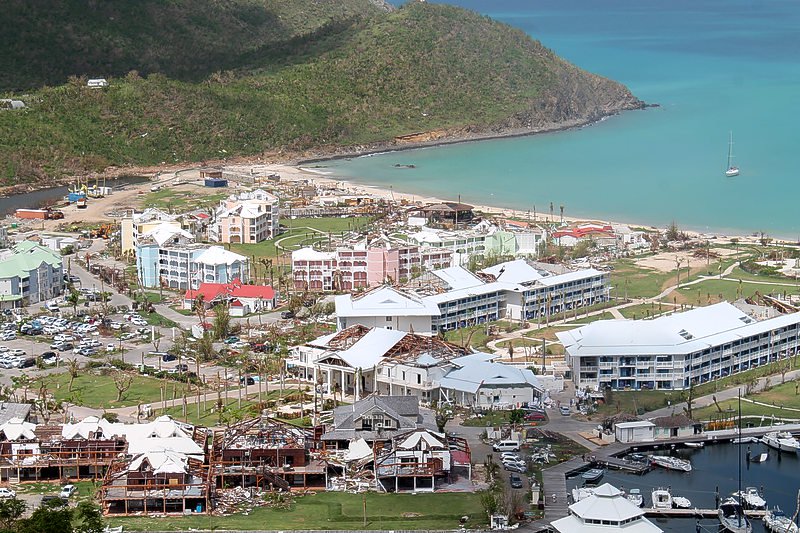 MARIGOT—Reserve Naturelle Director Nicolas Maslach described in detail the damage caused by Hurricane Irma in the editorial of the Reserve’s latest newsletter, noting the hurricane “effectively erased 20 years of work” in just a few hours and spoilt preparations for the Reserve’s 20th anniversary celebration.

“The damage is quite considerable,” he wrote. “The mangroves were wiped out. The underwater milieu and especially the coral, which was already suffering from effects of climate change, are ruined. A massive amount of debris carried by the wind has polluted all of the protected spaces along the coastline and in the salt ponds. Various facilities put in over the past few years no longer exist or are badly damaged.”
The list is endless: four bird observatories; the whale-watching observatory; two walkways in the mangroves; dozens of informative signs; five shelters; eight demarcation buoys; 30 mooring buoys; a bird nesting raft; the underwater path and the wooden pier at Pinel Island; coral nurseries; artificial marine habitats; the ongoing replanting along the coastline; and much more.
“The offices of the Réserve in Anse Marcel were flooded and two vehicles, luckily insured, cannot be used. Sadly, there is not enough insurance to cover all of these natural sites where the damage is estimated at close to 850,000 euros just for the various facilities. More than half of the budget of the Réserve lies in its ability to self-finance in the amount of 470,000 euros per year, thanks to economic and ecotourism activities permitted in these beautiful sites.
“It is clear that the level of tourism will be non-existent for the rest of 2017 and close to zero in 2018. So, this self-financing will be reduced to almost nothing just at the time when the Réserve needs this money more than ever, as its efforts to rebuild this natural heritage will be hindered.
“The small islands of Tintamarre and Pinel, and sites such as Creole Rock, Galion Bay, Petites Cayes and Wilderness were the natural jewels of St. Martin and its Réserve Naturelle, the last protected sites on the French side, highly valued by the population and the island’s visitors. The devastation of this natural heritage will have severe consequences on ecotourism, nautical activities and the economy in general.
“And yet we are not giving up the fight. First, we have to clean up all the sites on land, at sea and in the wetlands. The facilities and equipment that were destroyed or damaged, as well as public visitors’ centres, will be rebuilt thanks to financial support from the Conservatoire du Littoral. We are already hard at work.
“At the same time, thanks to financial aid from the French Biodiversity Agency, we hope as of this week to implement innovative ways to recover the biodiversity and ecological restoration in our terrestrial, marine and shoreline milieus. Alone, and without the proper means, the job is colossal … impossible.
“For the biodiversity of the island, the worst is yet to come for many different species if we don’t intervene as quickly as possible to restore their natural habitats: coastal vegetation essential for sea turtles during their egg-laying season; mangroves and ponds; nurseries for marine species; resting and feeding sites for more than 50 species of birds, certain of which are on the endangered list; and marine habitats such as coral and sea beds that are indispensable to marine life in our region.
“And finally, we were one day away from requesting authorisation for a building permit for the Caribbean Institute of Insular Biodiversity. Today, everyone is preoccupied with the urgencies of re-establishing our normal way of life. And yet, we continue to heavily promote the realisation of the Institute, which seems even more to be the perfect symbol of the reconstruction of St. Martin, which should be exemplary, innovative and respectful of the geological, geographical and climatic specificities of our region.
“More than ever, the Caribbean Institute of Insular Biodiversity is relevant after the damage caused by Hurricanes Irma and Maria, in terms of the themes it proposes to develop, in the fight against the effects of climate change, the recovery of our biodiversity, scientific research, recommendations for urban planning, development, improvement of the island, and tourism strategies.”