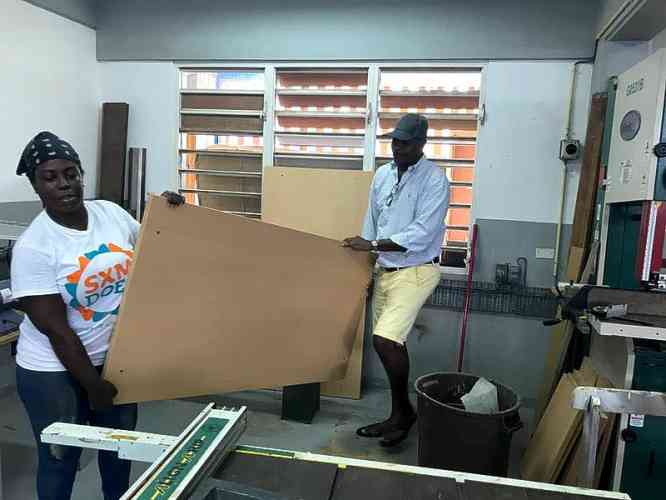 PHILIPSBURG–The Coordination Team behind SXM DOET is very proud to announce that this year’s event was a huge success. More than 2000 volunteers rolled up their sleeves to make a difference in the community. A total of 108 projects were organised by 70 locally represented organisations on Friday and Saturday, March 9-10.

A large number of projects this year focused on “beautification” – which was to be expected after Hurricane Irma. Many schools catering to youth of all ages were spruced up with a new layer of paint, fencing, benches and more.

Animal lovers helped build doghouses, raise awareness and even created a “cat-shelter.” Outdoor projects included the clean-up of neighbourhoods and beaches, planting of trees,
fixing irrigation pipes and clearing hiking trails. Many projects also focused on the social aspect of volunteering and took various groups such as the elderly and foster-children out for picnics, island tours, crafting activities and more.

“We knew that due to the aftermath of Irma, we would have an influx of projects this year. We are so thankful to all the volunteers that participated this year. It is absolutely heart-warming to see,” stated Melanie Choisy, Fleur Hermanides and Laura Bijnsdorp, the SXM DOET Coordination Team.

SXM DOET is part of a Kingdom-wide initiative whereby, this year, a total of more than 10.000 projects were hosted with more than 400.000 volunteers all giving back to their communities for just two days. The King and Queen join in, as well as Princess Beatrix, who all physically contribute at a project every single year.

Here in St. Maarten, various Ministers, parliamentarians, Government departments and cabinets were spotted in different parts of the community lending a helping hand. The Ministry of Public Housing, Spatial Planning, Environment and Infrastructure VROMI helped out a number of projects by aiding in the removal of trash and debris. The Ministry of Education, Culture, Youth, and Sport closed its doors on Friday so that staff could volunteer during SXM DOET.

Many businesses joined in on their own accord as well, with many requesting to contribute to the event in multiple ways. Some companies partnered with the SXM DOET Team to provide discounts and donations to all participants, and others donated their time and assistance by adopting a project for the weekend. A very special thank you is owed to those entities, as without such selflessness, SXM DOET would not be what it is today.

The SXM DOET Team thanked Easy Print, Firgos, Domino’s Pizza, Cake House, Prime Distributors, Heavenly Water, Greenfingers, Kooyman, Sherwin Williams, UTS, R&R Tackling, RMG Designs, Viva Signs, Philipsburg Broadcasting Company, Island 92, PJD3, The Daily Herald, Caribbean Legacy, Oba Oba Bar, Sunset Beach Bar, and CC1.
A number of committed volunteers also signed on as “volunteer project managers” this year. They assisted various organisations in the DOET process in weeks leading up to the event. The SXM DOET Coordinators said, “We owe them a big thank you as well, as they took some of the workload off our shoulders and helped the whole event go a lot smoother!” The coordinators were also happy with persons who signed on as their “media-team,” who made sure to document the whole event.

Be The Change Foundation, the executor and organiser of SXM DOET, also thanked the Oranje Fonds for having brought the initiative to St. Maarten and for funding the effort locally and throughout the rest of the Dutch Kingdom. Funding was increased from US $650 to $1,000 per project, per location, this year due to the hurricane-related damage St. Maarten sustained. A total of $89,000 was divided among 98 projects that submitted requests to SXM DOET.

“Thanks to the collaboration of funding agencies, Government departments, businesses, organisations and especially our volunteers, a huge positive impact was made on St. Maarten! We hope that SXM DOET continues to grow each year!” said the Coordination Team.

For more information on SXM DOET or to learn how to contribute in any way, contact the SXM DOET Coordination Team at info.sxmdoet@gmail.com or visit www.sxmdoet.com or
www.facebook.com/SXMDOET .