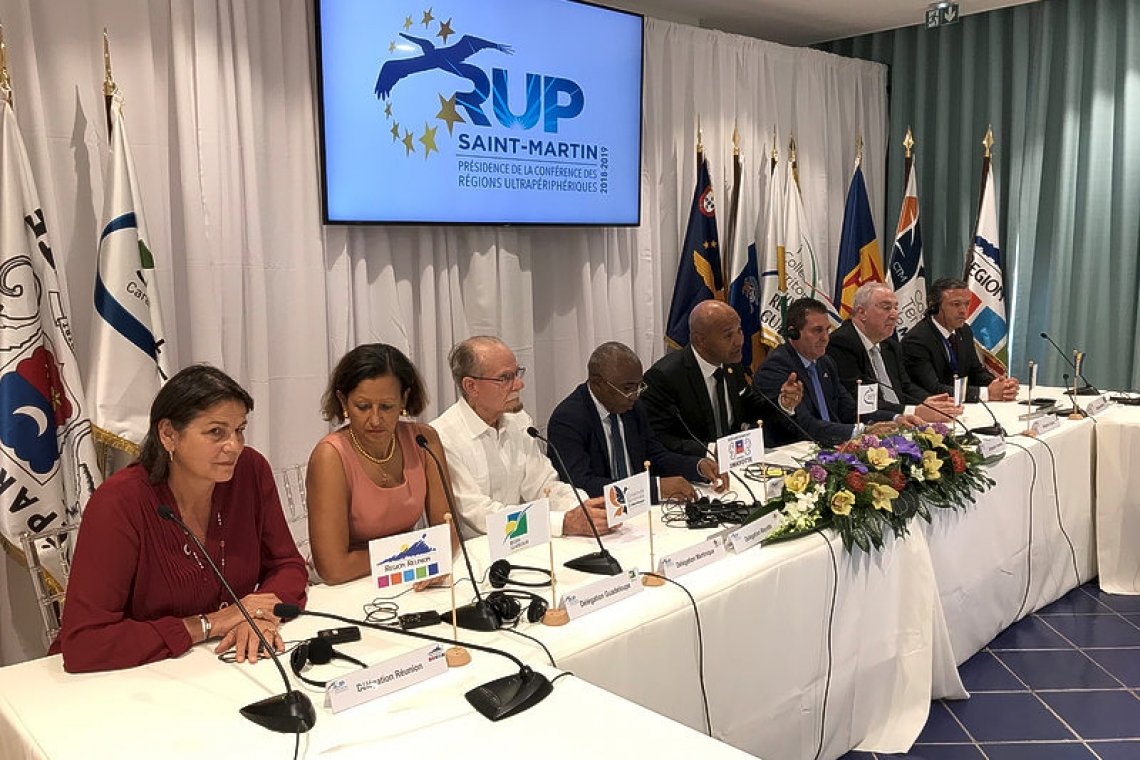 MARIGOT–The Collectivité of St. Martin is currently hosting for the first time the 24th Conference of Presidents of the Ultra Peripheral Regions of Europe RUP, also referred to as Outermost Regions (OR), at Belmond La Samanna Hotel, February 5-7.

President Daniel Gibbs on Wednesday received the eight representatives of the member territories of the organisation. Martinique is represented by President of the Executive Council of the Collectivité Territoriale of Martinique Alfred Marie-Jeanne, the Canary Islands by Deputy Minister for Foreign Affairs Juan Zamora-Padron and French Guiana by the Vice-President of the Regional Council, Denis Burlot.

The issues at stake at this 24th conference, at the end of which President Daniel Gibbs will hand over the Presidency of the RUP Conference to the President of Mayotte, are essentially the renewal of the Union’s institutions (European Parliament and European Commission), the European Commission’s new political priorities, the conclusion of negotiations on the next programming period 2021-2027 and the continuation of the long-standing partnership between the Union’s institutions and the conference of the Ultra Peripheral Regions.

The highlights of the conference are structured around three main meetings, the internal session of the Presidents and the thematic session on blue and green growth and climate change on Thursday, February 6, followed the next day by the partnership session bringing together all the participants, which will be punctuated by the handover of the presidency to the island of Mayotte.

Work at this 24th conference will focus on the following issues: monitoring the implementation of the communication on the outermost regions through the continuation of collaborative work between the European Commission, in particular the Outermost Regions Unit, to support this information strategy for the outermost regions (ORs).

Defending the status of the ORs, particularly in the context of the negotiations on the new programming period 2021-2027, by organising meetings with the Permanent Representations of the Member States of the ORs, through the tripartite working groups and, in particular, by organising a meeting in Brussels between members of the organisation and representative of the Finnish Presidency of the Council, Ms. Rislakki, and Chairman of Parliament’s Committee on Regional Development, Mr. Omarjee, as well as other Members of the European Parliament (MEPs) and lastly the pursuit of joint activities between the ORs and partnerships with the European Commission in areas of common interest.

Under the presidency of Daniel Gibbs, the conference is organised and co-organised with the European commission on several events aimed at promoting the specific characteristics of the ORs and their know-how in areas of common interest.