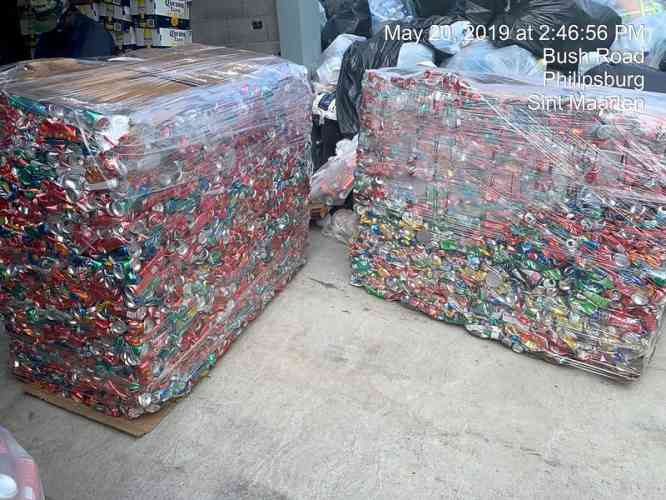 CAY HILL–CC1 St. Maarten has extended its Coca-Cola “recycle to win” campaign, which has seen some 2,600 pounds of aluminium collected thus far.

The campaign began on March 9, and every Saturday as of this date, empty Coca-Cola cans were taken to the Coca Cola Recycling Station at Meadowlands BV on Bush Road across from Carrefour Market. The plan was to end the campaign after Carnival, at the end of May. However, it has been extended for another month and will continue until the end of June.

Hundreds of consumers have so far redeemed their empty Coca-Cola cans for instant rewards from Coca-Cola brands. Items include drawstring tote-bags and hardcover notebooks, all emblazoned with the iconic Coca-Cola wave and logo. During the Carnival season, when re-deeming empties, consumers also had the choice to enter their raffle tickets to win Carnival Season Passes or a new iPhone XS Max from TelEm. The iPhone XS Max was won by Soraida Eights. More than 10,000 empty cans were collected for the phone raffle alone. Winning Carnival passes were Dorisha Cannegieter, Junedry Brown, Indiomar Blijden, Nichelle Leonora, Conrad Stapleton, Jasmine Royer, Jovanni Parotte, Kimberly Doran and Mark Ramsay.

Meadowlands has collected 2,600 pounds of aluminium so far which will be shipped off island and will not reach the island’s landfill. CC1 Senior Trade Marketing Coordinator Agnetha Huijting said, “St. Maarten wins as less waste is added to the island’s growing landfill.

“And we have given away over 100 Coca-Cola prizes. So, we decided that the importance for many customers/businesses requested to continue another month,” Huijting added.

The recycling station will be open from 10:00am through 5:00pm on Saturdays, and rewards can be claimed on the spot. Huijting stressed the importance of businesses promoting and encouraging all forms of recycling on the island, especially with the youth. “What they will learn today will form their habits tomorrow and keeping our island clean should be everybody’s business,” she said.