Home Local News Lewis disappointed with no action against Doran 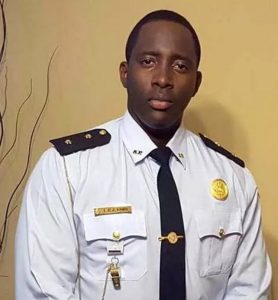 PHILIPSBURG–Police Inspector Lyndon Lewis has decided to break his silence about injustice done to him while working at the National Detective Agency of St. Maarten. The Prosecutor’s Office issued a statement on Tuesday morning stating that there is no factual basis for the complaints Lewis filed against Ademar Doran, the head of the National Detectives (see related story).

Lewis said that on March 18, 2015, he requested a meeting with the National Detectives management team based on irregularities he had noticed were happening in the department and based on what a co-worker in the department had brought to his attention because he was the union representative for police officials.

The management team then consisted of Doran, Edson Kirindongo (now Minister of Justice) and Lucy Gachette. After presenting his colleagues’ concerns to the management team, “I was told by Doran in a very rude manner that I should not question his leadership (beleid).

“One of my main concerns was the salaries of a Police Inspector in the function of a tactical detective. Doran was angered because I appealed my salary scale by the Governor after receiving my Ministerial Decree (Landsbesluit). My appealed petition was dated March 6, 2015. Doran got upset because I stood up for my rights by informing the Governor of my situation. Doran told me if I don’t resign from the union he will see to it that I be removed from the National Detective Agency,” said a passionate Lewis.

“I was also told by Kirindongo, ‘You will go against yourself, (je komt jezelf tegen) on numerous occasions,’ because I represented the people and making them aware of their rights and obligations to the organisation. These persons showed no sense of leadership and transparency. They only showed dictatorship.”

Lewis was called to a meeting by the same management team on April 23, 2015, informing him that he was being sent home for being in a union and his name being mentioned regarding an incident in Belvedere. When asked whether he was being fired or suspended, Doran informed him verbally in a rude manner that he did not want Lewis at the National Detective Agency.

Gachette asked Doran what should be put on the work schedule now that Lewis was being sent home and he replied to leave the schedule as is. This caused great concern to Lewis, who believed he was being set up.

“When I contacted attorney-at-law Cindy Henderson-Marica, she forwarded a detailed letter to the then-Minister of Justice Dennis Richardson explaining that Doran is not the authorised official to send me home. In the response to her letter the Minister mentioned that Doran stated that he just had a conversation with Lewis and he [Lewis – Ed.] then walked off the job. He also stated in the letter that at no moment did Doran send me home,” said Lewis.

On May 19, 2015, Lewis received from Kirindongo, in the parking lot of St. Maarten Medical Center, an official document signed by Minister Dennis Richardson dated May 7, 2015, that he was being investigated for dereliction of duty (vermeend plichtsverzuim) and in the interest of the investigation, he was prohibited from entering the premises of the National Detective Agency and the Police Force.

“I was never suspended. Suspension is given by the Governor and I’m a Federal officer (landsambtenaar). A minister cannot suspend me, according to the law. Based on article 100 of the Police Regulations, I was supposed to be immediately informed by the Minister or department head as to what I was being accused of.

“I was sent home on April 23, 2015, and was notified on October 14, 2015, (six months later). I was never questioned by any investigative body, by my employers [to this – Ed.] date. In November 2015 I used my constitutional right and took the Government to court to get my salary corrected,” said Lewis.

“It’s no taboo in the police organization that Doran lies on his subordinates when he is put in a spot. In one of the union meetings with Minister of Justice Edson Kirindongo, the unions ABVO, NAPB and WICSU/PSU and members of his cabinet, President of ABVO union Sharlon Cathalina brought my situation up to Minister Kirindongo.

“The Minister stated in that meeting that Lewis took his situation to court and he does not want to be involved in that. He stated, ‘If the Judge give Lewis scale 20, I will respect that decision and Lewis will get what is awarded to him.’ He further mentioned to the union president that the situation between Lewis and Doran is indoor fighting and he wants nothing to do with it,” said Lewis.

“I requested a transfer back to the Police Force KPSM and this request was honoured by Kirindongo in February 2016. Shortly after, I received an illegal leave of absence from the same Minister telling me to stay home with full pay until the Judge makes a decision about my salary and position. On August 22, 2016, the Judge honoured my appeal about my salary and position,” Lewis said.
Five days before the September 26, 2016, election, Kirindongo appealed the Judge’s decision in the Court of Appeals in Curaçao, after stating in front of many officials of the union and his cabinet that he would honour it. This came as a surprise to Lewis, as he was a candidate on the United St. Maarten Party (US Party) list, the same party that had appointed Kirindongo to the position of Justice Minister.

“Of course nothing will come out of my case against Doran. He knows the Prosecutor General and he is also buddies with the National Detectives of Curaçao that questioned me in addition, as if I was the suspect. It’s also known that when the Detectives came in from Curaçao they were picked up and hosted by Doran.

“I have proven to my colleagues that I represented with good faith and that I will continue serving and representing them and my country on the whole, no matter the circumstance, with pride, integrity and dignity,” Lewis said.