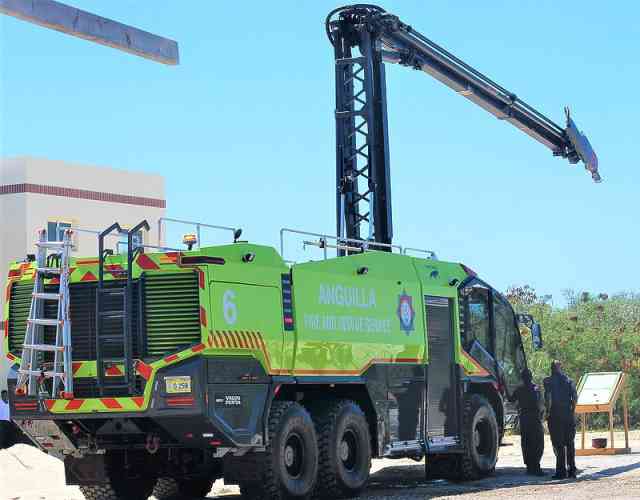 ANGUILLA–The second of three fire tenders arrived in Anguilla and was handed over to the Fire and Rescue Service of the Clayton J. Lloyd International Airport. Governor Tim Foy, Deputy Governor Perin Bradley and Acting Chief Minister and Minister of Infrastructure, Curtis Richardson were at the airport to witness the official hand-over at the Combined Services Building, on Thursday, March 7.

This state-of-the-art Fire and Rescue tender is the second of three tenders purchased with funding from the British government. In describing the capabilities of the tender, Fire Station Officer Worrell Brooks said, “The Panther is one of the most successful, efficient and variable aircraft rescue and firefighting vehicles worldwide.”

Governor Foy thanked all involved in the acquisition process that made the purchase of the three tenders a reality. He said, “The Anguilla Fire and Rescue Service for many years has had to operate with inadequate equipment. This new equipment is part of a wider process that we have been undertaking over the last 18 months to bring this airport to a point where its utilisation can be maximised. Without this equipment which was desperately needed to replace the second-hand aging equipment, we would not have been able to maintain an operating licence to allow the Gulf Stream and business jets to land. The new assets are fundamental to the possibility of getting direct flights from the USA to the island. It is an investment in the island.”

He said the airport improvements over the past three years had resulted in the airport now being regarded as one of the highest performing airports in the Caribbean region. He concluded, “This is a fantastic occasion about partnership and the relationship between the United Kingdom and Anguilla.”

Richardson said, “I was extremely happy when the first fire truck tender, which I named ‘Love’, arrived in Anguilla, and now today I am again extremely happy that the second fire truck, which I have named ‘Peace’, is now here in Anguilla. I will be even more elated when the third tender, which I have named ‘Joy’, arrives. We cannot take Anguilla forward into the 21st century in terms of aviation without these new assets. I am glad that the governor and the British government have given us the full support to move Anguilla forward.”

Following the official ceremony, the Panther was driven from its bay into the open to demonstrate some of its capabilities.