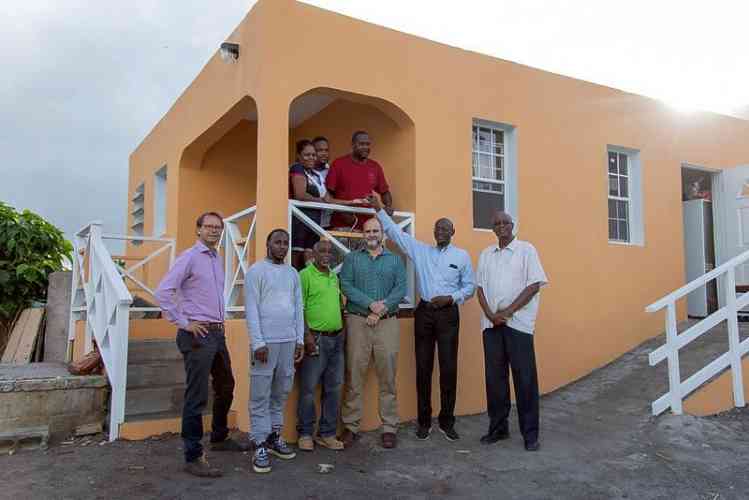 CUL DE SAC–Three families whose homes were completely destroyed during the passing of Hurricanes Irma and Maria last year received the keys to their new hurricane-resistant, concrete homes from St. Maarten Development Fund (SMDF) during brief handing-over ceremonies on Tuesday.

The three homes are all located on Dollison Drive in Cul de Sac. They were constructed from the ground up with funds from the Dutch Ministry of Interior Affairs. In addition to the newly-constructed homes, four homes were repaired on the same street.

Representative of the Netherlands in Philipsburg Chris Johnson, his assistant Robert-Jan De Wilde and SMDF Managing Director Keith Franca were amongst those present at the handing-over ceremonies.

The first stop was at the home of Carlos and Gloria Dollison, whose new house is a fully-concrete two-bedroom structure built by Hidalgo Construction. Carlos and Gloria’s son Carlos Jr. thanked SMDF and the Government of the Netherlands for the work done in the community to assist senior citizens, but especially for assisting his parents by building them a new home after their dwelling was totally destroyed during the September 2017 hurricanes.

The team then stopped at the home of Eneida and Pedro Dollison, who live directly opposite Carlos and his family and whose wooden home also suffered catastrophic damage during the hurricanes. Their new home was also constructed of concrete and made hurricane-resistant.

A little farther up the street is Ileaner Hanley, whose home was completely destroyed by Hurricane Irma last year leaving only the concrete foundation. Hanley also received keys to a brand-new fully-concrete home constructed by Main Road Construction. She has resided on Dollison Drive for more than 25 years.

Franca thanked the Government of the Netherlands for its confidence in the management of the funds by SMDF, which has successfully repaired and constructed 92 homes to date. A total of seven more homes are scheduled for repairs and three more concrete homes are currently under construction as part of this initiative.  Franca said SMDF is proud to have been able to again “contribute to a society that cares.”