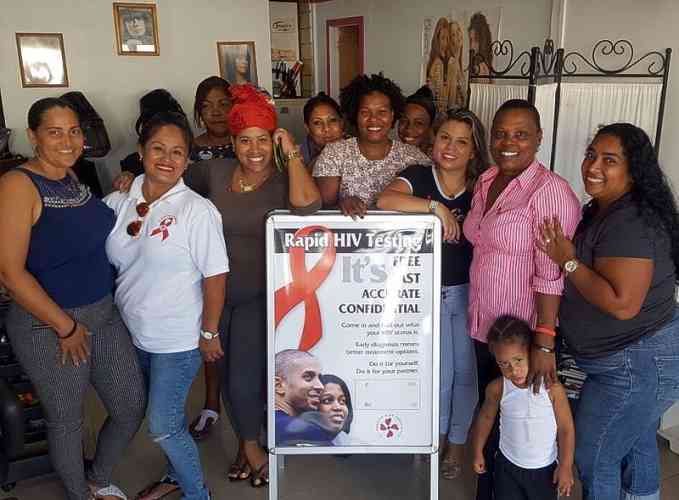 It was a smaller-scale event than the usual World AIDS Day testing the island has become used to, due to the lingering effects of Hurricane Irma, the Foundation said in a press release.

Scotiabank, which normally offers the use of their premises for the annual World AIDS Day event, suffered too much damage to host this year and American University of the Caribbean (AUC) School of Medicine which normally provides physicians-in-training for the event, has not yet returned to the island. The AIDS Foundation, which was only able to reopen its office in Cole Bay two weeks ago, decided to go ahead and test 30 persons at Gisela Salon. Condoms were also distributed for free.

“HIV continues to be a concern on the island and we need to keep free testing available while making treatment accessible to everyone in need,” Foundation President Dr. Gerard van Osch said. “The hurricane and its aftermath means HIV may not be (on) top of mind for most people, but regular testing is still strongly recommended to know one’s HIV status. Knowing your status is the first step in prevention, while treatment not only keeps the individual healthy, but also reduces chances of HIV transmission to others.”

“While some countries in our region are only now celebrating zero HIV transmission from mother to child, St. Maarten, both Dutch and French sides, had reached that stage many years ago, thanks to continued vigilance, increased testing and continued treatment.”

The Foundation said stigma and discrimination against persons with HIV/AIDS continues to be a problem for many persons in the community who live with this condition. “We can only reduce this by continually approaching HIV as just another medical condition that is currently perfectly manageable with treatment and while doing so reducing HIV transmission in our community.”

UNAIDS has set the year 2030 as target to eliminate new HIV infections worldwide. That target will be hard to reach, but attainable if everyone is on board, the Foundation said.

HIV Testing Coordinator for the AIDS Foundation Alicia Torres thanked Gisela Arrindell, Veronica Rojas and Yangela Rocio Pilier for their help during the event, especially for helping to bring in people to be tested. She reminded the public that the AIDS Foundation is open for free and anonymous testing at its office at Welfare Road #55, across from Tropicana Casino, from 9:00am to 1:00pm Mondays to Fridays. The office telephone number has been changed to 522-1472.