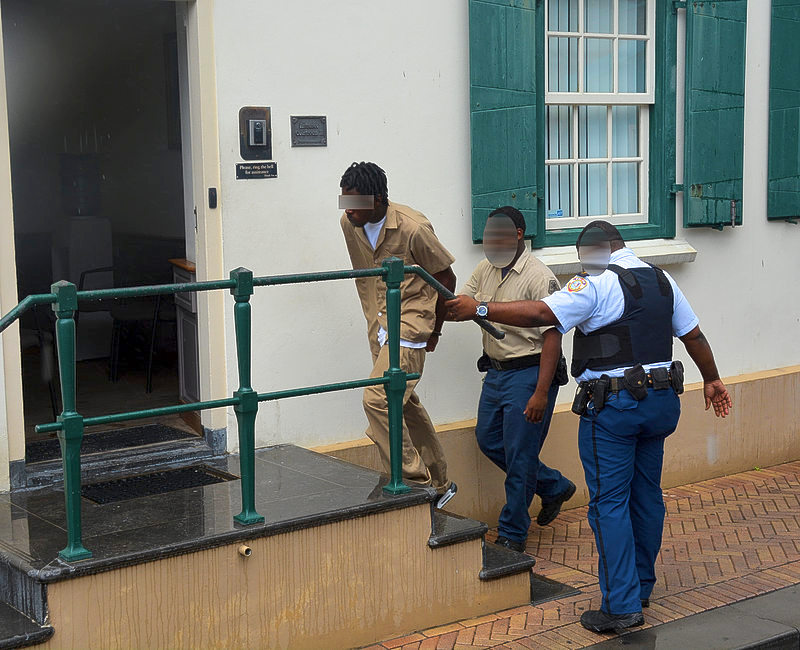 PHILIPSBURG–The two persons suspected of killing Eddie York Sr. in cold blood in his home on December 12, 2014, appeared before a judge in the Court of First Instance on Wednesday afternoon. Prosecutor Martin van Nes requested 18 years for the alleged mastermind of the murder J.E.Y. (34) and 15 years for triggerman R.H.O.Y.

The case took a strange turn on Wednesday when, at the start of the hearing, R.H.O.Y. accused his other aunt of paying him US $1,000 to murder his grandfather. This is the third time the suspect has changed his statement in the files. When arrested he admitted to killing his grandfather, a few months later he confessed to officials that his aunt, suspect J.E.Y., had paid him to kill his grandfather and on Wednesday he changed his statement again and said he had been threatened by his half aunt L.Y. and she was the one who had paid him to kill Eddie York Sr.

During the impromptu questioning of L.Y. she informed the court that she had been taking care of her father and would never have ordered the murder. She said the only one who would have had the motive was suspect J.E.Y. When asked whether she had had any conversations with R.H.O.Y. to have her father killed she replied, “No.”

The Prosecutor trying the case was not amused by R.H.O.Y.’s story and requested that he really think about what he was doing before accusing someone else. He pointed out that evidence supported R.H.O.Y.’s statement that his aunt J.E.Y. had ordered the killing and said he should take a few minutes to talk with his lawyer to make up his mind and tell the court what really had happened.

Fifteen minutes later R.H.O.Y. spoke with his lawyer and changed his story again by putting the blame for the murder on his aunt J.E.Y. “She is the one that gave me the gun and told me to kill my grandfather. I walked to his house and that’s when it happened on that day. I walked from French Quarter to Sucker Garden,” R.H.O.Y. said.

Eddie York Sr., who was 72 years old at the time, was found dead in his bedroom in his Upper Prince’s Quarter home. He was the father of 26 children. Nine months later J.E.Y. was arrested on September 16, 2015. Before her father died, J.E.Y. allegedly presented documents at a notary’s office giving her authorisation to act as the owner of his land. This raised a red flag in the enquiry after the killing.

R.H.O.Y. is charged with having fired the gun. The charges against his aunt include aiding, abetting and being an accessory to murder and manslaughter. During previous court hearings, J.E.Y. said she did not know why she had been arrested as she had nothing to do with York’s death.

J.E.Y. also had documents for an apartment complex which she said had been bought from her father. She had the deed to the land and receipts indicating she had paid her father with four cheques of US $36,000 for the property.

When asked by the Prosecutor how she had obtained the money to purchase the land she said she worked. The Prosecutor said the jobs were low-paying and asked how it was possible to pay for the land. She said a large part of her income came from a married man who lives in Curaçao with whom she was having an affair. The Prosecutor requested his name from J.E.Y., but she refused to give it because she believes that if she reveals her lover, this would hamper his marriage.

The two suspects have been in detention for 13 months and want to get the case over with, according to their lawyers.

The judge will render his decision in the case on November 23.