Home Headlines & Top Stories 350 passengers arrive from US on first day reopening to that market... 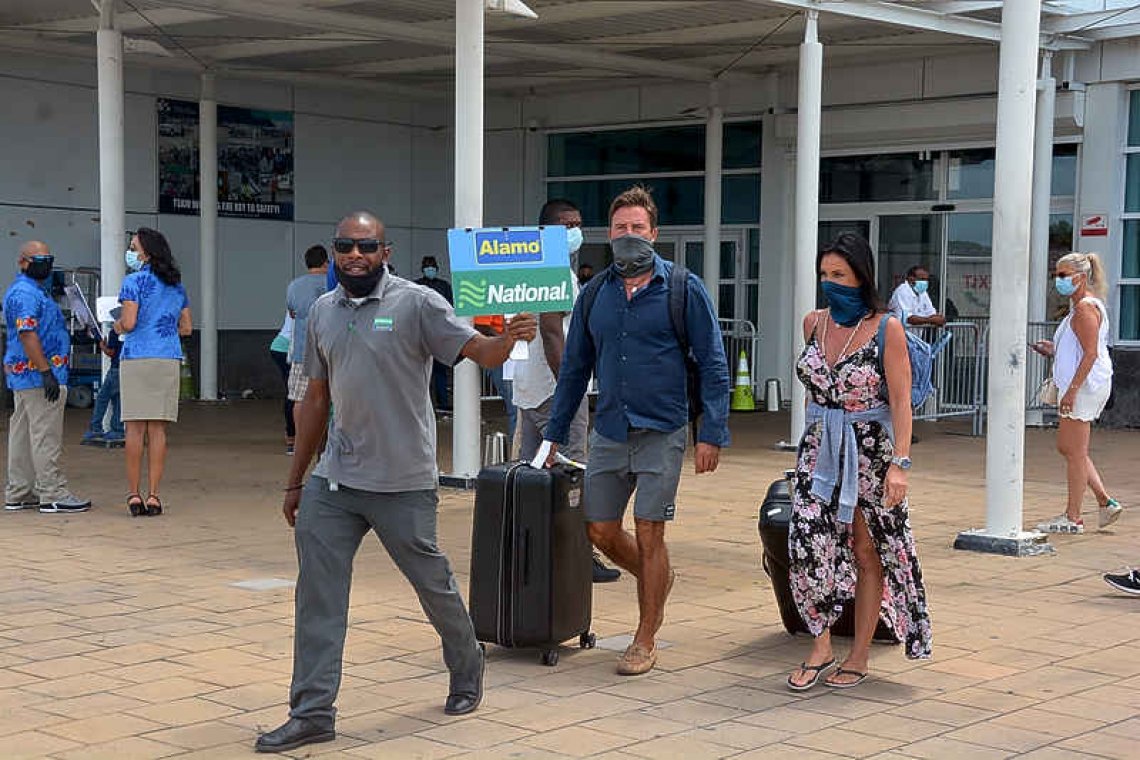 Passengers making use of a rental car company on Saturday afternoon.

AIRPORT–Exactly 350 passengers arrived at Princess Juliana International Airport (PJIA) from the United States (US) on Saturday, which was the first day the country reopened to that market in four months. Government officials and tourism stakeholders were on hand to witness the initial stream of US-based tourists set foot on “The Friendly Island”.

A jetBlue aircraft from John F. Kennedy (JFK) International Airport in New York City, New York, was the first to arrive. It touched down at PJIA around 11:20am Saturday.

The airport’s Rescue and Firefighting (RFF) Department lined up on both sides of the taxiway and welcomed the aircraft with a water salute.

As the aircraft parked at gate A1 and the boarding stairs approached to allow passengers to disembark, several government officials and tourism stakeholders took group photos to mark the occasion.

The 83 passengers arriving on this flight made their way to the arrival hall, and 12 of them were tested for coronavirus by staff of VSA’s Collective Prevention Services (CPS). In the arrival hall, they were treated to steel pan music courtesy of Sweet Pan Entertainment and STB.

In total, the US flights brought exactly 350 passengers to St. Maarten, and departed with 191.

The other international flight on Saturday was an Air France flight from Paris, France. This flight brought 189 passengers and departed with 221.

The airport’s passenger volume for Saturday’s five international flights was 951, of whom 539 were arriving and 412 were departing passengers.

CPS tested approximately 70 incoming passengers for coronavirus on Saturday, and none came back positive. These passengers were reportedly obligated to pay approximately US $125 for the test and were to stay in quarantine until their results returned negative.

“It is a great day for our first run of passengers. It may not have all been 100 per cent, but it is the first step to get destination St. Maarten back on its feet after nearly four months of hibernation,” said PJIAE chief executive officer (CEO) Brian Mingo on Saturday.

According to the latest figures of US flights released by the TEATT Ministry, American Airlines will fly to St. Maarten daily from Miami, Florida, and five times per week (except Tuesdays and Wednesdays) from Charlotte, North Carolina. After August 20, the airline will fly only once a week from Charlotte.

As US-based tourists come into St. Maarten, the French side closed its border to the country on Friday, except for cross-border workers and persons seeking medical attention.

“US visitors are not permitted entry to the French side of the island. Our US visitors are therefore invited to enjoy the southern part of this unique two-nation destination,” said TEATT in a press release on Saturday.