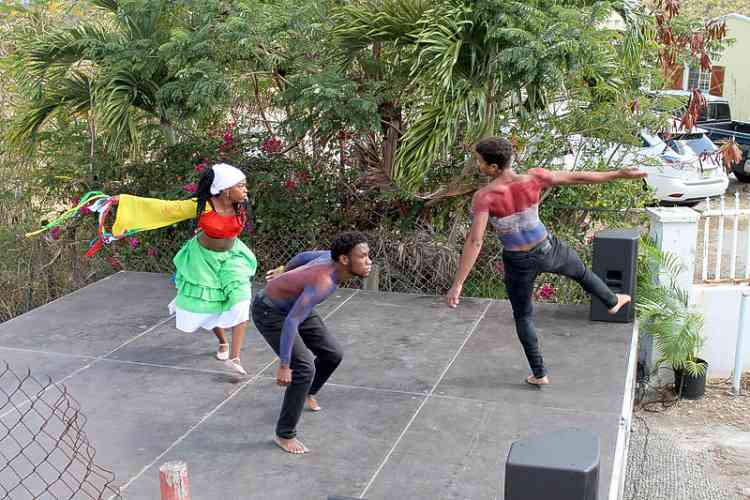 The ceremony was complemented by dance performances and poetry readings by Charlotte Brookson Academy and National Institute of the Arts (NIA) performers. (Robert Luckock photo)

MARIGOT–Government dignitaries from both sides of the island gathered on the summit of Mont des Accords on Saturday morning to officially commemorate the signing of the historic Treaty of Concordia at the very same spot 371 years ago.

The Collectivité had provided a shuttle bus from St. Peters to the summit for those not familiar with the location. The ceremony followed a debate on the treaty held in Hotel de la Collectivité the day before between Le Conseil Territorial des Jeunes and the Youth Parliament of St. Maarten.

The same two youth councils opened the event Saturday morning by reading out articles in the Treaty from a stage that offered a spectacular view of Marigot from one side and Philipsburg from the other side. The youth councils had an important role in co-organising the ceremony on Saturday.

Natisha Hanson and Laverne Henry gave their renditions of three national anthems; “Wilhemus”, “Marseillaise”, and “Sweet St. Martin Land”, followed by the laying of a wreath on the step of the official plaque installed by Le Conseil Territorial des Jeunes on March 23, 2016.

The presidents of the two Youth Councils assisted Governor Holiday, Prime Minister Romeo-Marlin, and Préfète Sylvie Feucher with laying of the wreath.

Romeo-Marlin began her address by noting the many varied examples today of free movement between the two sides of the island that stemmed from the provisions in the Treaty.

“We must acknowledge former leaders who have maintained this peaceful co-existence, but from one day to the next things can change drastically in the blink of an eye,” she said. “That’s why I congratulate my counterparts on the Northern side and my colleague on the southern side Wycliffe Smith for organising this historic event.

“The treaty is one of the oldest still in force and is the foundation upon which our island has been developed and continues to be developed. Because of this treaty we share a common culture, heritage that is expressed on both sides in music, food, dance, and through our bloodlines.”

She said civil servants on both sides are hard at work finding common ground and solutions to establish mutually beneficial agreements for inhabitants and guests on both sides.

“Priority has been given to strengthen the cooperation with French St. Martin and quadripartite meetings between the four governments continue to take place to address many issues at the highest level.

“I would like to remind everyone that the peaceful co-existence that we enjoy can only be maintained by meaningful cooperation and willingness to solve issues in a mutually beneficial manner. As leaders, it is our duty to maintain the spirit of the treaty for the generations to follow.”

Gibbs said in his speech that it is important to give the treaty new meaning in 2019.

“While the Treaty of Concordia established the values of unity, freedom and solidarity in St. Martin society, for too long our institutions have coexisted side by side without embodying this common destiny, which has been perfectly understood by the population,” he said.

“It is by giving us the means to strengthen cooperation on structuring projects that we will bring the treaty to life, 371 years after its signature. The work undertaken as part of the quadripartite collaboration illustrates this desire to unite our policies, while respecting each other, to pursue common development objectives.

“As you know, I always take advantage of one of our official meetings to remind you that establishment of the United Congress as a common political institution would open a new page in our history, as was the case with the Concordia Treaty in 1648.”

The ceremony was complemented by dance and poetry readings by members of National Institute of the Arts (NIA) and Charlotte Brookson Academy.