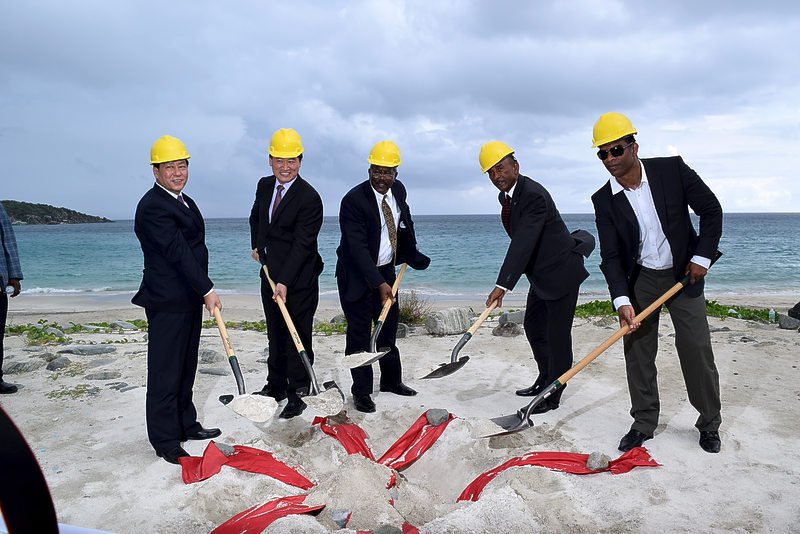 BELAIR–Four hundreds permanent jobs, which the local population has been urged to get suitably trained for, will be generated by the Pearl of China project. A symbolic ground breaking for the massive project on Belair beachfront was carried out on Saturday, but actual construction is set to start in the first quarter of 2017.

Those jobs, as announced by developer Trey Cui Shuqiang of New Life Town Investment and Development Limited, are mainly in the hospitality field and will been absorbed by the 326-room hotel with showroom and 450 apartments. The jobs will not come online until the hotel and showroom for Las Vegas style conventions and conferences is completed in two years.

Education Minister Silveria Jacobs, sought clarity about the “suitable jobs” the project would create at the Hangwang Caribbean Forum, organized by the visiting Chinese delegation in Sonesta Great Bay Beach Resort and Spa, ahead of the ground-breaking ceremony. The forum included a number of visiting and local private sector representatives and Chinese Consul Zhang Weisin stationed in Curacao.

Jacobs (National Alliance), whose party leader Prime Minister William Marlin and Finance Minister Richard Gibson Sr. negotiated to bring the development here, asked Shuqiang if the country will be given the information about the kind of needed jobs, an educational programme and training in the skills needed and in the Chinese language to begin.
Shuqiang said, via his translator, a report of the jobs required will be produced and shared with Government and all efforts will be made to work with Ministries of Labour and Education “to come up with policy. This is a key requirement.”

Asked at the press conference if he foresees the Chinese language being necessary to local to communicate with people who will make use of the Pearl of China when completed, Shuqiang said he hopes everyone will know Chinese as it is a beautiful language. He offered to set up a Chinese language school, but warned that Chinese was not an easy language to learn.

However, his hope is that in five years people will speak Chinese at “an acceptable standard.”

An incubator for small businesses will also stem for the project. This will give 100 young entrepreneurs opportunities to start their own businesses, including in the renewable and sustainable energy fields, announced the developer.

The US $120 million project will not only create jobs when its doors open. Some 200 jobs will also be generated in the construction phase.

When asked by the press where financing for the project will come from, Shuqiang said he will not have issue getting financing.

Member of Parliament Rodolphe Samuel (NA) asked about the types of businesses the venture will bring to the country. Shuqiang said it will be a centre for trade and investment and introduce more eco-products, bring international conference and innovations among other areas.

Forum initiator Jonathan Lin outlined the need to tackle climate change and to build eco-community. Tagging to that, Shuqiang said his company is committed to building in harmony with the environment.

Weisin and a researcher from the People’s Daily Newspaper of China shared the Chinese Government’s policy of the Silk Road Economic Belt and the 21st-century Maritime Silk Road. The Consul also outlined the level of Chinese investments in the Netherlands, totalling thousands of jobs and hundreds of projects and the reciprocal ventures of the Dutch Government in China.

The Chinese Consul expressed happiness, also via translator, about the Pearl of China project coming to St. Maarten. The project will serve as “a platform” for entrepreneurs here and in the Caribbean and Latin America.

Prime Minister William Marlin decried those in the community who want “to make it look like just the construction of a hotel.” The project will bring the world to St. Maarten and boost the economy and improve the lives of the country’s people. “This is an opportunity to diversify the St. Maarten economy that has been slowing down.”

The “enormous benefits of the project” will soon be seen. “The positive impact on St. Maarten and the region is one that we look forward to,” said Marlin.

He added that since the announcement of the project earlier this month “we have been getting more and more phone calls” from people wanting to be part of the development.
Shuqiang expressed similar sentiments saying: “A lot of businesses have expressed interest in doing business with us … they have been touched by transparency and openness.”

Gibson Sr. said the project that will bring Chinese business people here to connect with the rest of the Caribbean and Latin America “will change the landscape of St. Maarten forever.” He added that the change will be not only to the physical landscape, but to the financial standing of the country.

The Finance Minister said he would no longer have to struggle to balance the budget, because thanks to this project surpluses can be envisions and the expansion of the economy. It will also provide “great opportunities for St. Maarten entrepreneurs and equip them with technology not available to them” now.

“This project will contribute to bringing China and St. Maarten closer together” and will “improve the happiness of the people,” Gibson Sr. said. This project “will make St. Maarten the centre of trade in the Caribbean … if this is not a gift then I don’t know what a gift is.”
Turning soil.

At the symbolic ground-breaking ceremony carried on the beach in front of the neighbouring property that includes Little Bay Pond, Shuqiang said, “We will not damage a single grass or tree before we have decided how to protect it [the pond – Ed].”
Chinese people “know how to take care of the environment” as it is part of their values and beliefs, he said, adding that he “came to St. Maarten with the idea of sustainable development.”

The pond is not on the Barbaron property, but on the neighbouring plot that belongs to a Venezuelan.

Some unique details of the project is a robotic parking lot that will be completely solar powered, a botanical garden and a dome on top to stream in light to all 13 floors.
Protest.

The announcement of the project has not sat well for a sector of the community. This has sparked an online petition to halt the project and the submission of several objections to the adaptions to the existing Barbaron project plans that date to 2006. A group of protestors were at the ground-breaking site to show their displeasure for the lack of information about the project (see related story).

Shuqiang, commenting on the community response, said it is a “driving force to make the project more successful” and give the people “hope for a better future and for happiness into a reality.”

After Pearl of China is operational, the developer said the environmental impact can be measured as well as “if the people are getting happier.”

“We don’t look at profit; we look at positive community impact … I strongly believe no one will reject improved quality of living,” he said.

In face of the protest, Shuqiang said the project team has not defended itself, because they believe “the people who care for St. Maarten, for their children and future can’t wait for this project.”

He called for people with “misunderstanding to let go of their doubts, because the project will truly bring benefits.”

Speaking to the protesters’ gather at the back of the tent, Shuqiang said the first permanent jobs to come available will got to the people who have misunderstandings about the project. His only advice to them was “to quickly improve on your skills … and not to listen to inaccurate information.”

Marlin, asked about the protesters by the visiting reporter from China, said he did not know if they were protesting because an election is coming up or due to the lack of information. What was clear, he added is “there were not many protesters so there is no reason for the government or the developer to be concerned.”
Giving.

Shuqiang has promised to donate a fully equipped ambulance to Windward Islands Emergency Medical Services (WIEMS), 4,000 solar panels, 1,000 energy efficient light bulbs and 500 inverter air conditioners for schools and senior citizens.
Tables and chairs for the temporary location of Charlotte Brookson Academy for the Performing Arts. The school will be housed in the current Government Administration Building as of the end of October.
Source: Daily Herald
400 permanent jobs for locals promised by Chinese investor