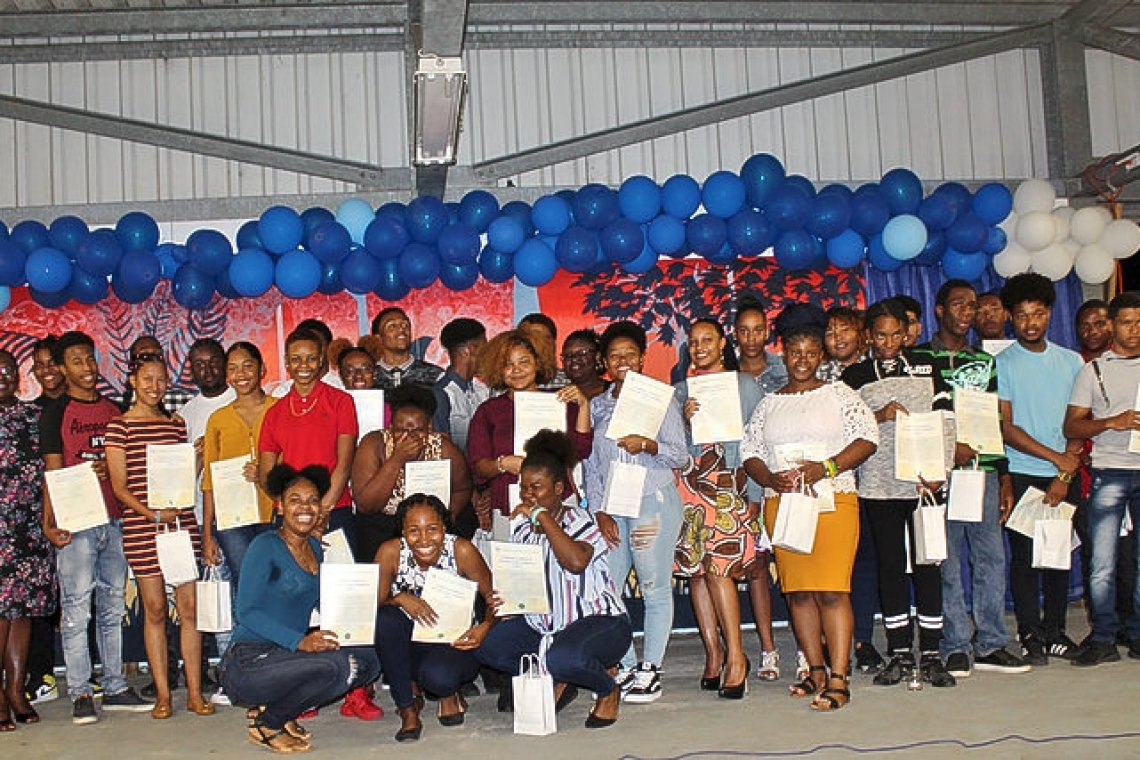 This was the first batch of students from the school to receive the certificates. Spanish teacher Vanessa Bennett said the school had embarked about four years ago on a challenge to introduce the new Caribbean Examinations Council CXC programme. The aim was to prepare and provide every child with the proper skills and competence that will enable them to function in society.

“The programme is basically a competency-based programme that will allow our students the opportunity to have active hands-on learning and allows them to build that skill further where they will be able to transfer that knowledge to the CXC programme or the Caribbean Vocational Qualification programme as they progress through the school, which these students are already a part of,” Bennet said.

The five core subjects of the CCSLC programme are English, Math, Social Studies, Integrated Science and Spanish. Some countries choose Portuguese or French for language.

In total 42 children sat the exams and only one was deemed not yet competent. The programme was new to teachers and students.

“I’m very proud of the achievement of each and every one of our students because you have shown that you were able to master the work. Change can be scary, but you know what is scarier? Allowing fear to stop you from growing, evolving and progressing. I want you all to be proud of whatever achievements you make in life.

“Some say, ‘What’s the big deal? It is just a secondary school level 2 certificate,’ but the truth of the matter is you did not pick it up in some corner of the schoolyard, you worked for it,” she said.

The school honoured CCSLC programme facilitator Celeste Cox with a plaque and a token of appreciation during the ceremony. Cox travelled from Barbados to give the school first-hand knowledge and expertise on implementing the CCSLC programme at the GvP School. GvP Principal Rosalie Edelstein-Lopes said whenever students and teachers saw Cox, they all knew that she meant business as she took the work very seriously.

“We are so proud that you [Cox – Ed.] have taken on the task to journey here to our island to teach us, guiding us on this journey, engage in parent meetings and explaining information on items that we ourselves did not understand, as well as keeping the staff of the GvP School up-to-date on the syllabus. … We honour and thank you for all that you have done for this small Dutch Caribbean island,” Edelstein-Lopes said.

Cox thanked everyone for the award and for the “wonderful journey” she has had even though the form of discipline is different in Statia when compared to Barbados. Cox advised parents to continue encouraging their children, as they may not understand what is happening but the important thing is to provide support to them.

“Support can be done in a bunch of different ways such as asking them about their day, whether it be providing the necessary materials needed for the courses or asking them how their day went, if they have homework or test coming up. Sometimes your children are going through things and they don’t want to tell you, but keep in touch with your children,” Cox said.

Alexander “Lexi” Lindo was the master of ceremonies for the event. Also present were Deputy Government Commissioner Alida Francis and family, friends and teachers of the students.