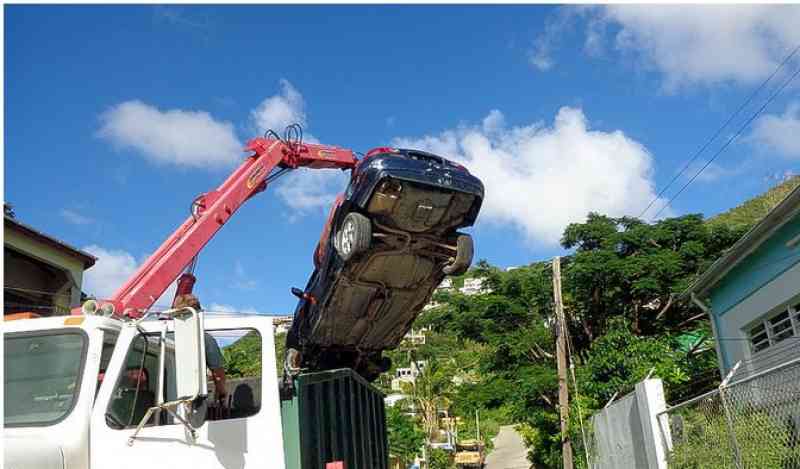 PHILIPSBURG–The Ministry of Public Housing, Environment, Spatial Development and Infrastructure VROMI completed its half-year report on Wednesday and will present it to the Council of Ministers.

Reflecting on some of the highlights of 2019, VROMI Minister Miklos Giterson said the successes of the first half of the year will be used as to as a measuring stick to keep up the progress, “I think it’s wise to look at what has been accomplished so far and use it to guide how the Ministry continues to perform for the second half of 2019.”

According to a press release, VROMI’s critical task remains the post-Hurricane Irma recovery, including clean-up, repairs and taking decisions on items that are significant to the rebuilding of the country and its economy.

“Most notable of these decisions are the permits related to the new general hospital and the redevelopment of the location of the former Sonesta Great Bay Hotel,” Giterson stated. “Each of these critical permit approvals has long-ranging benefits for the country.”

The permit for the long-talked-about state-of-the-art general hospital was submitted early in Giterson’s term and was expedited at the Minister’s request. Once completed, Giterson believes, the country will gain the ability to treat patients who normally have to seek medical care abroad for illnesses such as cancer and kidney disease.

The re-development of the former Sonesta Great Bay location is regarded as an economically-critical activity, replacing a large hotel property that was destroyed by Hurricane Irma.

He said, “Upon completion, the Planet Hollywood Hotel would add approximately 400 rooms to the country’s room inventory, a move that would significantly bolster the island’s overall tourism product.”

Aside from permit-related decisions, Giterson initiated the process to review and revise the country’s long-standing building ordinance and building code. Both policies were published in 1935, prior to World War II, and their review and updating to reflect modern times has been a personal project for Giterson.

“Many people believe that Irma showed us that we need to build better,” he stated, “but in reality, it was Hurricane Luis that should have triggered a complete overhaul to both the building ordinance and code. We cannot truly build back better without this process first taking place.”

On the repairs-and-construction front of the recovery effort, Giterson pushed for VROMI to partner with non-governmental organisations (NGOs) such as the Red Cross, White and Yellow Cross Care Foundation, United Nations Development Programme (UNDP), Samaritan’s Purse, Salvation Army, the Seventh-Day Adventist Church and St. Maarten Development Fund (SMDF) on the rebuilding and repairing of homes that were severely damaged or completely destroyed by Irma.

These collaborative projects, Giterson believes, are an example of the importance of NGO and government partnerships during and outside of times of crisis. A still-ongoing process for VROMI is clean-up of car wrecks along the roadside and from private property, and removing eyesores that double as potential destructive debris in the event of another storm.

Giterson states that approximately 5,000 car wrecks have been collected, with another clean-up round pending to kick off on July 16 and conclude on August 12. In addition to that, the construction of Kenepa Road in the district of Cul de Sac for the Brookson Estate was finalised in March 2018.

The tender for the repairs for the St. Maarten Housing Development Foundation (SMHDF) was also a success and the works have commenced. The 10th European Development Fund (EDF) project, the Dutch Quarter sewerage project funded by the European Union and the Government of St. Maarten has also commenced with a minor delay. The works are expected to be finalised by late August this year.

One of Giterson’s primary goals as incoming VROMI Minister was to return and further increase the income generated by VROMI for government’s coffers, particularly in its two primary earning departments, Domain Affairs and Permits. The focus was to make the necessary assessments and then work with the general public and private sector to get things back on track.

Domain Affairs, in addition to handling the distribution of land requested by private citizens and public entities, manages the collection of payments owed to government by long-lease land-holders. As of June 1, earnings within Domain Affairs totalled approximately NAf. 2.8 million. This is in comparison to NAf. 1.1 million generated in the first half of 2018.

Giterson credits the department’s staff for their commitment to bringing Domain’s monthly collections to a level that allowed the Ministry to position itself as one of government’s top earners.

“Domain has made tremendous strides in the first half of the year,” Giterson said. “This is in spite of the fact that the department itself is understaffed by three people. The department’s maximum capacity is seven people, which is extremely limiting. “For perspective, the same department in Curaçao has approximately 65 staff members, as they saw the need to invest in this critical income-generating area of government.”

Short-staffing has been a hindrance to the Permits Department as well. However, this VROMI unit has also boosted earnings for government since the start of the year, partially thanks to larger projects and temporary support in manpower received through the Dutch government.

“Permits was projected to earn NAf. 1.1 million for the entire 2019,” Giterson stated. “However, the first quarter earnings already have the department at NAf. 1.3 million in actual building permit fees collected and there are still five months left in the year. I anticipate that Permits, having already surpassed its target, will further exceed original expectations.”

Giterson’s other primary concern has been the country’s waste-management status and the landfill, which has not experienced a major fire since October 2018. Additionally, he worked with all stakeholders to secure funding for continued fire suppression, which is the initial step in remediating the landfill problem.

Giterson commissioned the investigation into and appraisal of the homes located near the landfill. “No real solution to the landfill can be undertaken without first relocating the families currently living near it,” he explained. “This has been a long-pending step towards realising an actual way forward with resolving the landfill and waste management issues plaguing the country.”

With the appraisals now completed, the investigation continues to obtain suitable housing for the relocation of the approximately 20 families living beside the landfill.

Giterson and his supporting departments have secured funding from the World Bank-managed trust fund to execute the long-awaited Link 6 project, which will connect Dutch Cul de Sac to Lower Prince’s Quarter by way of the pre-existing Weymouth Hill road.

Cul de Sac, as the number one flood-prone district on the island, has just one road in and out of the area. It is anticipated that Link 6 will allow for alleviation of traffic into the Cul de Sac area and will provide emergency resources an alternative route into and out of the district.

Funding has also been secured via the World Bank for a complete lagoon clean-up. This will remove remaining wrecks that are on the surface and underwater in Simpson Bay Lagoon.

“I look forward to the Ministry continuing in this focused, target-driven and results-oriented manner,” Giterson said.