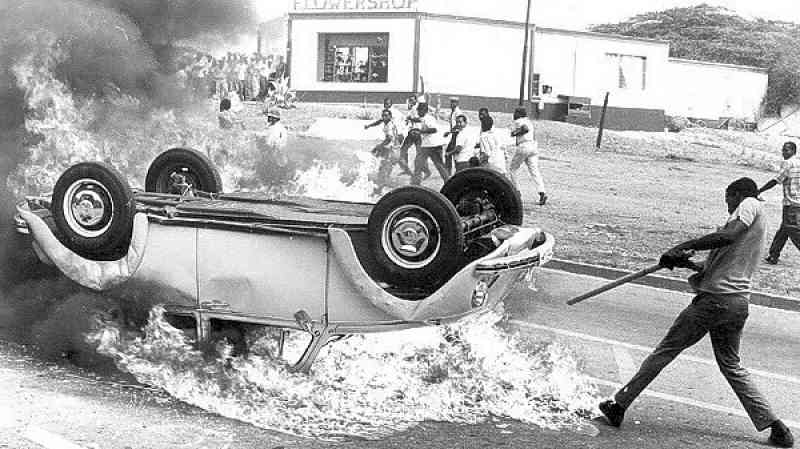 Protesters turned over cars and set them on fire.

Parts of Willemstad on fire.

WILLEMSTAD–“White racism in Curaçao turned into black racism. The Dutch had set a good example for that.” Stanley Brown sits on his talking chair and looks at the mural in his living room. It is written with large black letters: 30-5-69. “Trinta di Mei” occurred 50 years ago.

Willemstad was on fire then. What started as a strike of workers at the Shell refinery degenerated into a violent popular uprising in the inner city, which was partly burned down. Two people died and dozens were injured.

During the course of the day, one hundred armed Marines, Dutchmen and Antilleans, were directed from the military barracks to the city. Later, more local Marines were added, also from Aruba. When night fell order had – more or less – been restored.

Then 30-year-old teacher Stanley Brown was one of the three strike leaders. He was arrested, just like Amador Nita and Wilson “Papa” Godett. The latter was kept under surveillance in the hospital after being seriously injured by a police bullet.

In the years after 1969, Stanley Brown is slowly written from the history books. “I believe that was due to my colour. May 30 has unmistakably left its mark on the emancipation and awareness of the black Curaçaolenean. We received appreciation for our own colour and culture.”

Amador Nita became a minister years later. “If I criticised his policy, then his answer was: those white people have benefited for years, now it is time for the black people to harvest,” says Brown.

In his eyes, 30 May was primarily a colour battle. “Class lines in Curaçao usually run along colour lines. Difficult for me, because I am a red nigger. Son of a black Curaçao worker and a white Dutch mother. But at school I was a white Curaçao citizen. I have been troubled by this life duality.”

According to Brown, May 30 has been a turning point, not only in the relationship with the Dutch, but also for the working class. “There were collective labour agreements, public housing to give poor people better housing, each house with its own toilet, running water from the tap and good healthcare.”

But the emergence of a welfare state, based on the Dutch approach, turned out to be pricy for Curaçao, Brown calculated. “After 1969 we got the flag, our own national anthem, a coin. We got those things without fighting for them. But they don’t mean anything. We have to have work!” And Brown hits the table with his fist.

In 1993, the former revolutionary founded a political party that wanted to join the mother country: Curaçao had to become a province of the Netherlands.

Brown is proud of his role during and after 1969. “Much has been achieved, although according to him, people born after 1969 do not see that.”