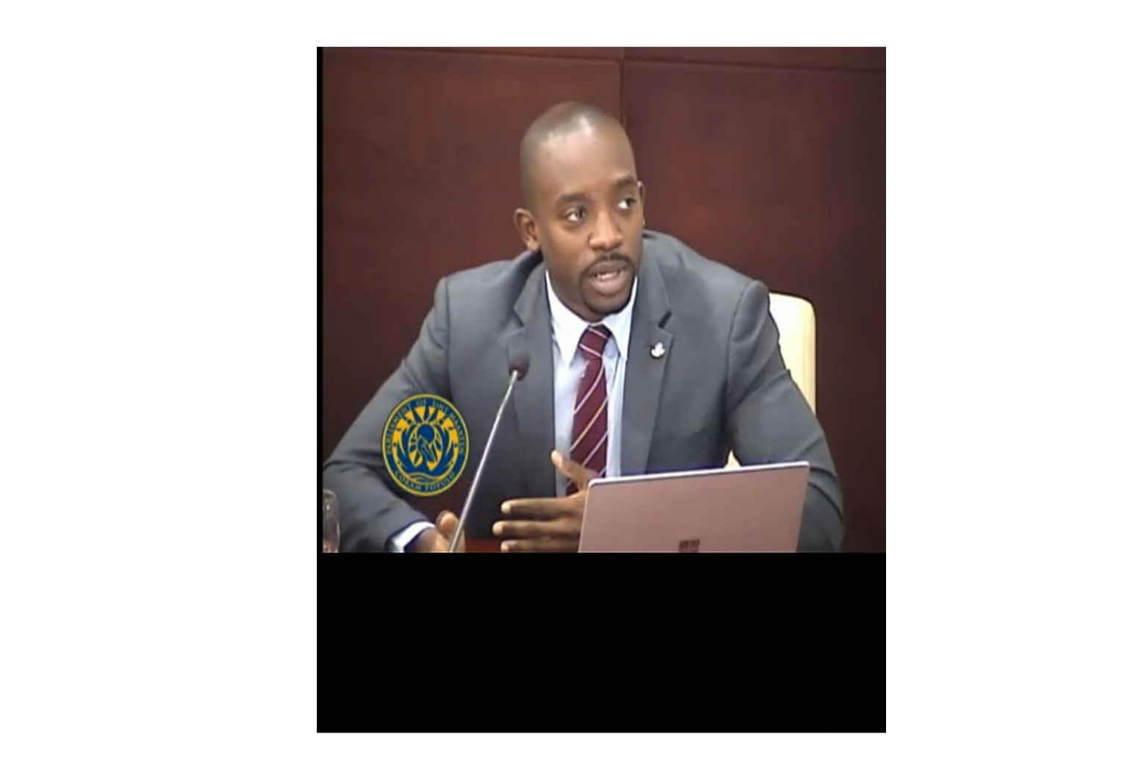 PHILIPSBURG–If a proposal currently on the table goes into effect, consumers purchasing items online such as from Amazon will be required to pay a 7.5 per cent tax on the items, they buy on the world wide web.

The proposal is intended to create a fairer playing field and stimulate consumers to purchase locally, as well as capture “lost revenue” for government.

Finance Minister Ardwell Irion elaborated on the proposal during the continuation of a meeting of Parliament on Thursday on tax reform for the country. He also explained that a 12.5-per-cent Value Added Tax (VAT) is “off the table.”

As it relates to the 7.5 per cent tax, Irion said the International Monetary Fund (IMF) suggested that the country considers a form of import tax to be levied on private imports – which is the proposed 7.5 per cent tax.

He explained that when a business imports a product and sells it retail to consumers, a 5-per-cent Turn Over Tax (TOT) is paid by the business on the amount the item is sold for – so there are no changes being proposed for this.

However, “when the consumer (you and I) orders products online, from Amazon, for example, Amazon does not pay the 5-per-cent TOT. This creates unfair competition for businesses registered on St. Maarten. In order to create a fairer playing field and capture lost revenue, a 7.5 per cent tax on retail sales is proposed on those purchases by individuals,” the minister explained.

The tax acts as an incentive to stimulate consumers to purchase locally, and the intention is to charge the tax when the item is picked up locally after being shipped.

“When a consumer imports goods, no import tax nor sales tax is levied on those goods. The existing regime stimulates consumers to purchase on the Internet more than shopping at a local retailer,” Irion said in response to questions from MPs during the meeting.

“The 7.5 per cent retail tax proposal is not in addition to the 5-per-cent TOT… But as a practical matter, such a retail tax could be imposed on the freight handlers or administered where consumers pick up parcels shipped from abroad. The tax should also be imposed on services. The goal of such a new retail tax would be to achieve rough parity with the TOT. The tax should not be imposed on any sales by a St Maarten business that is subject to the TOT. Since the TOT is a cascading tax, setting the sales tax rate higher than the TOT rate (for instance, at 7.5 per cent) would provide either parity with the TOT or provide some incentive for consumers to purchase from local businesses rather than directly from abroad,” Irion explained.

In explaining the taxing of “games of chance,” Irion explained that it is proposed that institutions where games of chance are played such as casinos or lottery companies, withhold the gambling tax from the winnings of an individual. There will be no threshold on the amount of winnings to be taxed. Therefore, in the event someone wins, for example, $ 100 at a casino, with a lottery ticket, the casino or lottery company where the money is won will be responsible for withholding the tax for government. The pay-out will be done after the tax is subtracted, subsequently that tax will be submitted to the Receiver, Irion explained.

Government’s proposal for Real Estate Tax, (which is an alternative to Property Tax), is basically for houses of non-residents to be taxable, while the first house of residents will be exempted from Real Estate Tax, and the second house exempted, providing the rental income is taxed through income tax.

“As nothing is cast in stone yet, further details, for example the determination of the rate to tax the real estate need to be further researched,” Irion explained.

The International Monetary Fund/CARTAC’s Fiscal Affairs Department had proposed the introduction of property tax; however, the government has proposed a real estate tax as an alternative to this.

Irion said in the Temporary Work Organisation (TWO) setting, the possibility of so-called differentiating between resident and non-residents as it pertains to taxing properties, or the revenues thereof was discussed. The Dutch counterparts confirmed that making a distinction and treating the groups differently within the scope of this proposed tax is possible and it is being done in Bonaire.

Irion alluded to an excerpt from the Technical Report of April 2021 from the Fiscal Affairs Department of CARTAC/IMF “Sustainable Tax Reforms.” The preface states:  The mission reviewed various tax reform ideas, including introduction of a general consumption tax, broadening current tax base while reducing tax rates, and introducing a financial transaction tax replacing (part of) the current tax system. The mission recommends enforcing the existing recurrent property tax and introducing taxing casinos and the winnings as best options.

Regarding discussions with French St. Martin on coordinating efforts with proposals for the Dutch side to introduce a sin tax on diesel and alcohol, Irion said St. Maarten and Saint Martin met in March this year on this topic. “During this meeting St Martin indicated that agreement on rates between St. Martin and St. Maarten is hardly possible. The reason for this is that St. Martin can make use of much lower rates than St. Maarten because budgetary deficits will be financed by France, while the budget of St. Maarten must be cost-effective. The conclusion of the discussions is that whether there is a sin tax, TOT, VAT or import duties, introducing such taxes in cooperation has its advantages, but is not required.

It is only recommended, the minister said, to introduce the sin tax if a price comparison with the French side indicates that the competitive position of business in St. Maarten will not be negatively affected by this tax.

The minister explained that the country has a plan approved by government. The basis of the new legislation is derived from the original tax reform plans of 2015. Funding did not materialize for these plans and in the meantime more than six years have passed, and devastating hurricanes and an ongoing pandemic are a reality.

The purpose of the tax reform meeting in Parliament was to establish a common ground for new legislation to be stipulated that will lead to a specific proposal. When Parliament, for example, has specific demands for tax reform, these will be considered when making the draft legislation.

Following Irion’s presentation to Parliament, government will determine and work out the detailed steps forward within the steering committee. He said the steps to be taken from this point onward, the points to be discussed and consultations to be had, among others will include after consensus is reached, then the outlines of the tax reform will be worked out and discussed in detail after which a new advice will be sent to the Council of Ministers for approval – this will then be the official position of government of the outline of the Tax Reform.

After this approval, calculations will be made based on the detailed outlines. The calculations provide, amongst other things, insight into the social economic consequences of the changes, provided that the Centraal Planbureau in the Netherlands is able to calculate the relevant social economic impacts of the tax reform.

The project of drafting legislation with regard to the Tax Reform will have to be outsourced to a third party.  After the first draft is completed, the third party or the Department of Fiscal Affairs of St. Maarten will consult the stakeholders for input, and will present the new legislation to government which will then follow the legislative trajectory.

The minister explained that Tax Reform is currently in the hands of “capable experts.” He said while “we may not agree with all their proposals, the government sought and consulted professional internal and external experts.”

He said discussions with stakeholders have not yet occurred, but assured that this will be done. “There is a process in place. As such after the first draft legislation regarding tax reform is completed, this draft will be sent to all stakeholders for input.”

He emphasized that tax reform is a part of creating an attractive investment climate in general for business development. A simple tax system in which profit tax is reduced, wage tax is reduced, other taxes are abolished and yet others are introduced to spread the burden or level the tax burden are, for all intent and purposes, stimulators for all business.