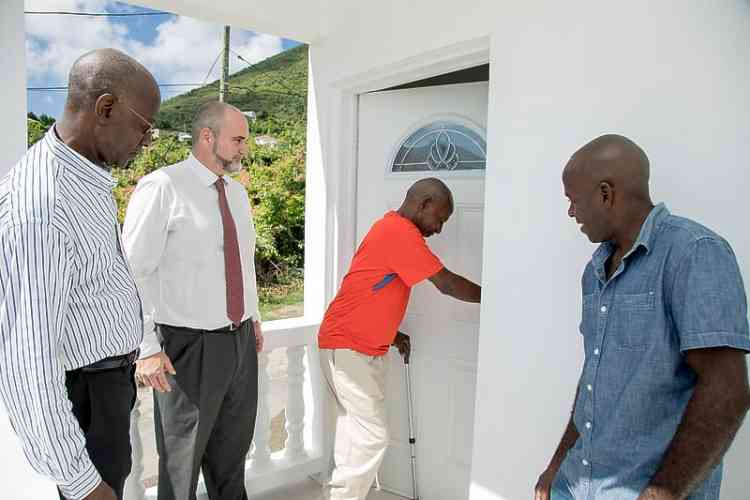 PHILIPSBURG–Peter Alfonso Hodge (71) can now enjoy his senior years in the comfort of a brand-new home which was constructed under the auspices of St. Maarten Development Fund (SMDF).

The pensioner was originally identified for assistance at the end of May 2017 when SMDF began seeking out seniors for its Elderly Project. When he was first identified, Hodge’s home was in a severe state of disrepair, with walls on the brink of collapsing.

SMDF had all intentions of working on the dwelling. Unfortunately, the passing of Hurricane Irma put a temporary halt to the Elderly Project, but its commitment to Hodge remained and he now enjoys his new fully-concrete home.

The home, which was completed in approximately 150 days, was presented to Hodge by SMDF Managing Director Keith Franca, Dutch Representative in Philipsburg Chris Johnson, and contractor Geddes Smith of Elite Development Team.

Elite Development Team, under Smith’s leadership, began the work in May and completed the job in less than five months. The extensive work included full demolition of the old structure, reinforcing of the existing foundation and construction of a two-bedroom, one-bathroom home. Built to accommodate Hodge’s wheelchair, the home has wide doorways, a wheelchair ramp for entry and exit and a wheelchair-friendly bathroom.

“We hope that this home is one that Mr. Hodge can enjoy for many years to come, without worry of destruction,” said Johnson.

Constructed almost 50 years ago, Hodge’s original home was one of many that had been built with the help of neighbours and friends who came together under the theme of jollification. In an interview with journalist Laura Bijnsdorp earlier this year, Hodge spoke of how one could count on the community many years ago, which is now rare.

Watching Hodge enter his new home, Franca said the day marked the start of a new chapter for Hodge. He thanked those who had contributed to the project, including Johnson and the Ministry of Home Affairs and Kingdom Relations for financing SMDF’s Elderly Project, Technical Project Manager Joseph Dollison and the contractor and his team.