Home Local News 80 per cent more arrivals at PJIA in 2019 compared to year... 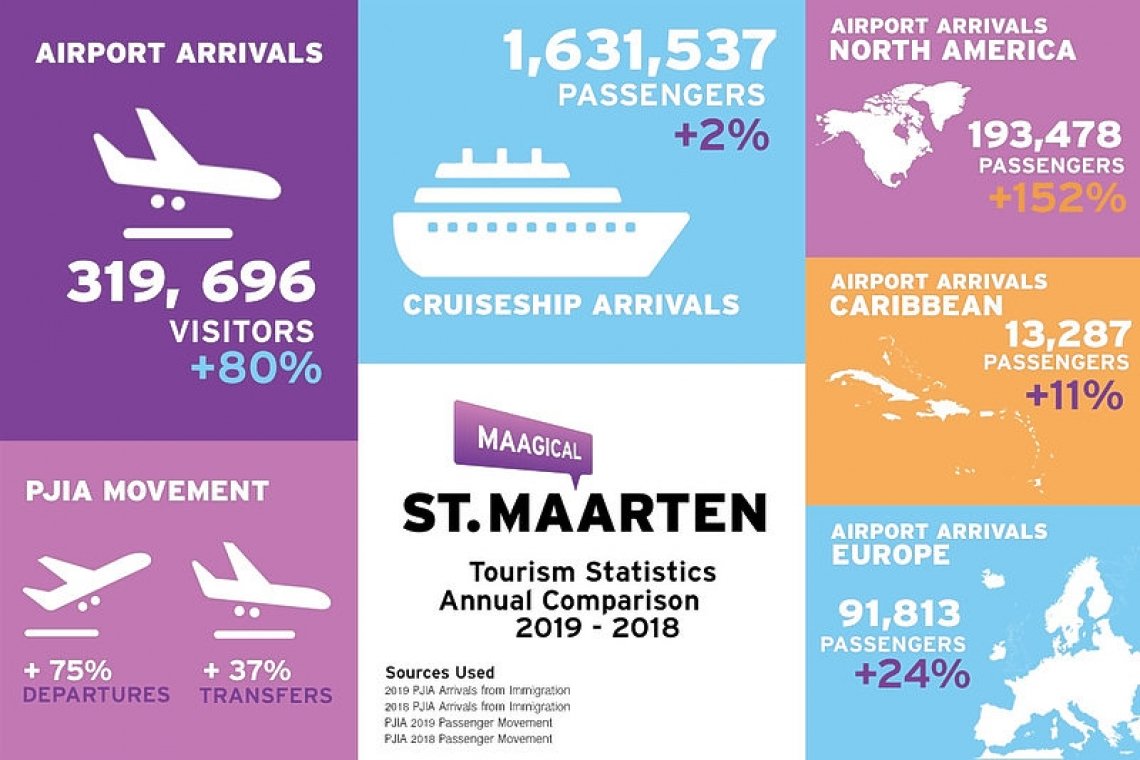 Graphics showing the movement of tourists.

A total of 319,696 visitors were recorded at the Princess Juliana International Airport (PJIA) reporting an overall 80 per cent increase in visitors compared to 2018.

Factors that contributed to the 80 per cent visitor increase were the increase in flight frequencies from key gateway cities in the beginning of the first quarter of 2019, and the introduction of new airport gateways. JetBlue introduced its new flight service between Fort Lauderdale and St. Maarten in 2019, Sunwing returned with its winter flight service out of Montreal and Toronto, and KLM returned with its direct three-times-weekly flight.

While all source-market arrivals increased for 2019, the North American markets, the destination’s main source markets, were the biggest contributors to 2019’s visitor increase, the St. Maarten Tourist Bureau said in a press release on Tuesday.

Based on the Annual Tourism Exit Survey report of 2018 and preliminary numbers of data collected in 2019, there is strong support that visitors are returning in numbers, with 55 per cent – 70 per cent of 2018 – of 2019 survey samples being repeat guests.

To boost destination perception to aid returning flights, the St. Maarten Tourist Bureau has executed various consumer-marketing campaigns in the North American market such as campaigns with Expedia and TripAdvisor, amongst others.

Compared to 2016, which is used as a pre-Irma benchmark, being the last full year of standard operations, in 2019 the destination received 61 per cent of 2016’s visitor arrivals.

“It is important that we continue our marketing efforts and strengthen our synergy amongst our partners and stakeholders, while we also focus on the long-term objectives that will build the foundation for our tourism industry. The actions for 2020 will be concentrating on consumer awareness through heavy social media and digital marketing efforts as well as our branding,” said Tourist Bureau Director May-Ling Chun.