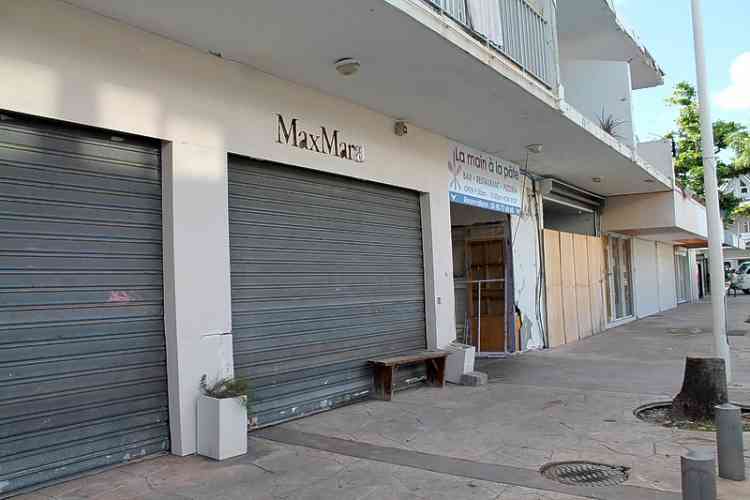 MARIGOT–Indian Merchants Association of St. Martin AISM President Peter Sadarangani says eighty per cent of shops or businesses are closed in Marigot since the passing of Hurricane Irma, including almost all those in the once-thriving “jewel” of Marigot, Marina Royale.

He noted a desire among some businesses to relocate to Hope Estate’s Industrial Zone from Marigot, although that area did not escape the wrath of the hurricanes either.
“Marigot is being abandoned even more than it was before Irma,” Sadarangani declared at a press conference on Wednesday. “There’s a sense of fear of what if a big hurricane strikes again. And looting was above all the last straw. Shops that are open are functioning on a minimum scale. How are we going to survive now in the coming months and years? Marigot is the capital of the French side and has always been linked to businesses.”
He added that the moratorium on social charge payments that were pending ends on December 31, 2017.
“Come January there will be a demand for what is owed and if the businesses don’t have the cash flow to pay this debt, how will they even think of paying what’s coming in the future? Once you have employees, social charges are on. You need the revenue to pay all these expenses, and that’s worrisome. Time will tell.
“Some owners of businesses are off island and they are out of touch, Yes, they were aware of the hurricane, but will they reinvest and build back those businesses once they get insurance money or will they neglect them as they have done in the past for years?
“High rents were a major cost to us. If rents would have been balanced, businesses would have been more viable and not pushed into a corner. But these owners need to do their fair share, fix up the properties and charge a reasonable rent so business can continue.”
Chamber of Commerce President Jean Arnell convened the press conference to give an overview of the immediate financial help accorded to businesses from the various government aid schemes, to present ways of diversifying the economy and to suggest how the French side can salvage what is left of the tourist season from the cruise ships, considering there are no major hotels operating for at least another year.
He first thanked his Chamber employees and services for accepting to clean up the Chamber to receive some 2,000 business owners in September, the purpose of which was to evaluate their material damage, projected loss of business and whether they were insured or not.
“We’ve already had an economic and social situation with a great deal of employment, before Hurricane Irma,” Arnell said. “The scope of this disaster has put every business in a very difficult situation with no income.
“Sole proprietors – taxi and bus drivers, for example – have no employment insurance. We need a minimum amount of demand to tick over, we need support from the government to alleviate wage taxes (which was granted), and support to clean up the island and restart the economy so people can come out to consume in a secure manner.”
He said there should be a concerted effort now to salvage what is left of the current tourist season, to welcome the spinoff from the cruise ships, given there are no major hotels operating. Discussions have suggested offering “three points of welcome,” two of which are in Marigot. They are Orient Beach, Rue General de Gaulle, and West Indies Mall.
“We can have temporary installations on Orient Beach for people to eat and drink and enjoy the beach, as the Collectivité owns a parcel of land there. In Marigot we believe Rue Général de Gaulle is a good spot for tourists to be dropped off, as that’s the street where most of the stores are open. It gives a view of a place open for business. And there’s a possibility of making that area near West Indies Mall an attractive temporary replacement for the waterfront.”
On another point, Arnell said insurance companies need to make repairing taxis and buses a priority so that these sole proprietors can get working again in the tourism sector.
He said given President Daniel Gibbs’ “Grand Marigot” project, Marigot is not likely to die even if there is an exodus of some businesses to Hope Estate.
“Marigot needs urban rejuvenation and visuals need to be created,” he insisted. “If you re-urbanise the waterfront in terms of restaurants, shops, apartments it can be very attractive. As it is today, it’s not attractive. But Marigot will always be the capital. Plans are one thing, but plans need to be executed.”
He said the Chamber’s focus is on macro-economic reconstruction.
“We want to contribute ideas, whether they be used by the State or the Collectivité in its Phoenix development plan. I mention macro-economy a lot to talk about structure of our gross domestic product (GDP). We need to act and work in a way that 20 years from now the proportion of our GDP is different per sector.
“We need to build new sectors that do not expose us to the risk of tourism-related failure. What we are seeing here is a market failure. We know when we need to request government intervention in terms of market failures. This is the time when government is needed, to support the business community. Also, compensation from insurance companies along with international aid is vital to not lay the fiscal costs of this disaster at the foot of local government.”