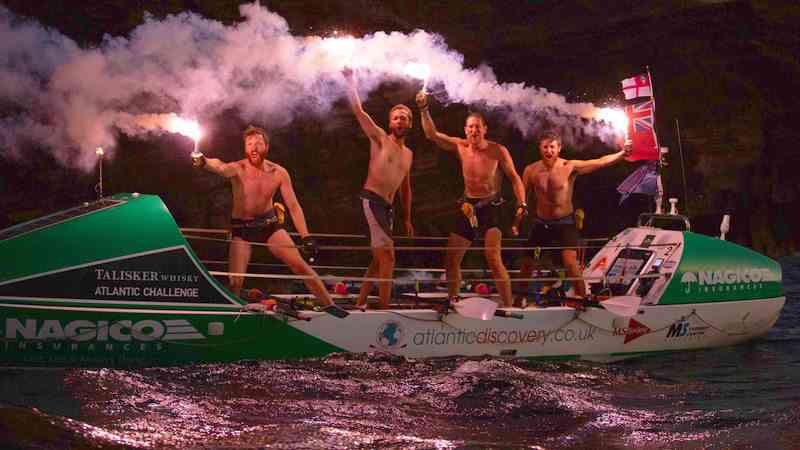 The Atlantic Discovery Team celebrate at the finish in Antigua. (Photo Penny Bird)

PHILIPSBURG–The numbers say it all; 1,000 hours rowing, a million calories consumed, a million oar strokes made, 700 litres of water consumed, 52,000 watts of solar power used, no capsizes, and one elated team at the finish.

Those are some of the stats published following the NAGICO-sponsored Atlantic Discovery Team’s completion of the 3,000-mile Talisker Whisky Atlantic Challenge on January 22, in 40 days, 23 hours and 33 minutes.

But as Cameron explained, while sixth sounds impressive, it has to be taken in context of other team entries that were pairs, threes, fours, a team of five, and singles at the back of the fleet.

Cameron is currently on island with his sister, professional photographer and writer Penny Bird, to thank NAGICO Executives for their support and to give inspirational talks and radio interviews about their epic Atlantic crossing. The team has raised 30,000 pounds sterling for Multiple Sclerosis (MS) research. Rower Ben’s mother is an MS sufferer.

A presentation of the team’s Atlantic odyssey was made to pupils of Learning Unlimited School on Thursday, another to 400 NAGICO employees from the regional branches on Friday, and to NAGICO’s senior management. The remaining three members of the team are in the UK and also giving talks in schools and in radio or TV interviews, whenever gaps in work commitments allow.

“We’re still riding the wave, spreading the message and raising a bit more for MS,” says Penny who covered the team’s voyage in her blogs. “Cameron and I were inspired two years ago to start this journey and we want to pass that inspiration on because it’s been so amazing.”

For Cameron the euphoria that comes from conquering this test of physical and mental endurance is still very much alive. “It’s changed my perception on things. I feel more in the present, taking more time with people, promoting young talent, and trying to make a difference. Things I always did, but now it seems much more real. We are still connected as a team and have more activities planned.”

The team saw no other boats during the crossing (teams were spread out over the ocean) except for Row for Victory which caught up to them and the two boats were rowing neck and neck.

“We had to decide if we wanted to try and out-row them and go for a fifth place but It meant putting three on the oars which would have come at great cost, and detrimental to goals we set ourselves,” Cameron explained. “So, we stepped back from that competitive urge.”

Until, that is, an all-female team was seen in the rear-view mirror requiring a step on the accelerator.

The lowest point for the team was when they were caught in a low-pressure system, battling against wind pushing them in the wrong direction, in addition to a malfunctioning auto helm for steering.

“It was a very difficult night. At one point we were rowing for eight hours and made 3.4 nautical miles (400-metres an hour) until the conditions eased off,” Cameron said. “Mentally that was really hard. When the boat is going nowhere it’s huge stress on the body. But it was a defining moment for us proving we had the determination and grit to go against something stopping us from going where we wanted to go.”

Did the team all get along during the voyage? “We spent a lot of time before the start in getting to know each other and bonding to understand what would make us sad, happy, or angry and how we would react to stressful circumstances. We all had a clear understanding of that and a high level of awareness of what would cause a situation. It made it more manageable. It was tough for Jack because he was sea sick for the first few days and then he got a golf-size boil and was basically on pain killers for the whole trip.”

Medically speaking, there were no serious issues other than sores and fungal infections, because of being in a wet environment all the time. Despite rowing in shifts and having short sleeping periods in a hot cabin with a temperature of 38 degrees Celsius, sleep still came easily because of tiredness, and was helped by fans.

And despite being in top physical condition from months of training and lifting weights, the one thing the team complained about was sore backsides from the rowing seats. It was learnt that the winning team had custom-made seats that replicated the shape of their posteriors.

The team had enough food for 60 days (1.3 million calories) but some of the freeze-dried food went off towards the end causing some sickness. But the team was able to catch fresh fish and pickle it in lemon juice. They also had 15kg of Biltong, a salted dried meat, and meal replacement formula which needs just water added.

On board the boat was an extra roving solar panel which the team commissioned and that powered GPS for navigation, communications, lights, the water maker and auto helm for steering. The latter, however, frequently overheated until they could put a fan on it to cool it down.

The R45 boat has been shipped back to the UK to its owner Matthew Bennett who will lease it to another team on May 1. With Atlantic Discovery’s participation this robust boat has now done five Atlantic crossings.

Asked if he did the crossing again what would he like to see different or improved about the boat and equipment, Cameron replied. “All new electrical equipment once it is over five years old. We had issues with the Raymarine, the VHF, the auto identification system (AIS) and auto helm. It’s just too risky. I would go for new kit completely.”

Would the four of you do the same rowing challenge again? “Yes, I’m definitely up for it,” says Cameron without hesitation. “Isaac says yes to everything and I’m sure Ben and Jack would. For me I would like to do it with new equipment, new boat, and race it. But the journey we’ve just done had different objectives.”

Undoubtedly the best experience was approaching the finish line coming in to English Harbour, Antigua, to a welcome from thousands of spectators, blaring horns from boats, and the NAGICO officials to greet them.

“I’ve done lots of things, but this row is the biggest and best thing I’ve ever done by a million miles,” enthused Cameron. “Letting off the celebratory flares, it was just amazing. We had to slow the boat down because all the conditions, current, wind, came together and we wanted to come in at sunrise. And getting off the boat after 40 days, we were very wobbly.”