Home Local News A record number of volunteers have signed up for Saba DOET... 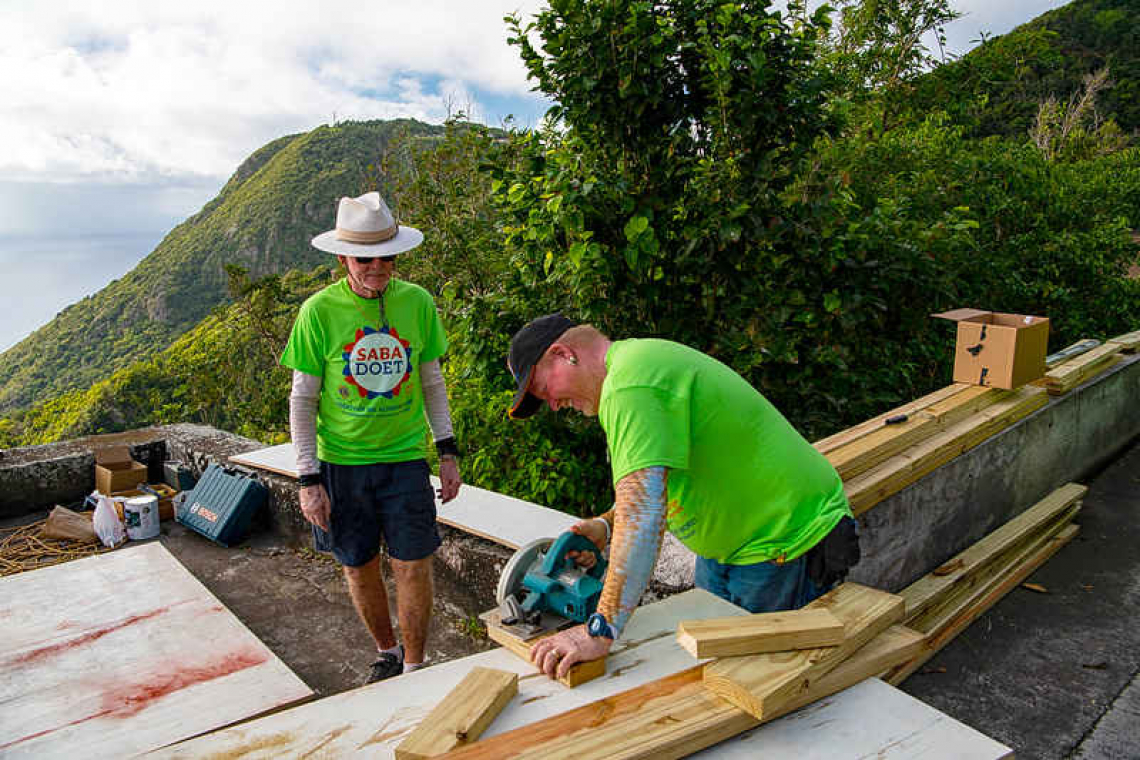 Volunteers in action during Saba DOET 2020. (Saba DOET file photo)
SABA–A record number of persons have signed up for this year’s Saba DOET on Friday and Saturday, May 28 and 29, the annual “make-a-difference” event where volunteers help out in the community.

Non-profit organisations in Saba were encouraged to register their projects and a good many did. In total there are 21 projects, for which some 400 persons are volunteering, some of them signing up for more than one project.

The large turnout is partly due to the participation of Saba Comprehensive School (SCS) and its students, as well as primary school Sacred Heart School (SHS) pupils. The majority of the projects have been submitted by SCS.

Among this year’s projects is a clean-up of Spring Bay on Saturday, organised by the SCS Hiking Club, together with the Catholic St. Paul’s Conversion and Saba Nature Education.

A large amount of plastic waste which has washed ashore in the bay will be cleaned up and removed. The trash will be brought up the steep, rugged hill of Kelbey’s Ridge by a human chain.

Saba Red Cross volunteers already did some preparatory work on Saturday, May 22, and filled many garbage bags. In preparation for this clean-up project, Saba Conservation Foundation (SCF) is organising a trail blaze of the Spring Bay trail on Friday.

Another project that can count on a large number of participants is the community clean-up of St. John’s. SCS students will go out with gloves and garbage bags on Friday to clean the entire village where the school is located.

Primary school pupils will take part in a stone-collecting party on Friday, gathering loose stones and rocks on the school’s playground to make the area safe again. A number of renovations will be done at the playground on Saturday.

Kuminsa di Nobo (“Start Again”) Foundation will hold an event on Friday and Saturday to repaint the lines on the public parking lots at the harbour and the airport.

Reverend Gerard Bisschop Foundation has taken on the task to clean and give the bus stop in Hell’s Gate a touch-up and to paint the community centre in that village on Saturday.

Saba Reach Foundation has two projects: paint and spruce up the shed at The Garden in The Level on Friday to continue welcoming customers to buy fresh produce and the construction of a new hydroponic rain gutter system at The Garden on Saturday to increase produce.

Child Focus Foundation in Windwardside is holding a “Feel Good Friday” where 10 young girls will participate in a spa day with a short meditative practice and a selfcare lesson. The event serves to promote self-love, self-care and body positivity.

The Saba Lions will organise an event for senior citizens at Eugenius Johnson Center on Friday where volunteers will play games with them.

SCS is organising a special Meals on Wheels edition. The Lions Club’s regular Meals on Wheels does not serve meals during weekends. Therefore, SCS students and staff will treat 50 clients to a meal and dessert on Saturday.

On Saturday, volunteers will work on the new SCS school boat, a former rescue boat that needs to be restored and repaired.

At the school garden, a small shed and an irrigation system will be built on Saturday. SCS is initiating the building of picnic tables at Godfried Bontebal Technical Center at Cove Bay on Friday and Saturday.

The hall, a former youth centre behind the Catholic church in Windwardside rented by SCS, will be cleaned and the “mess of wires” in the building sorted and tested.

SCS and Agricultural Station are organising aloe vera planting on Friday at the school’s parking lot to prevent erosion and to beautify the area. Chess tables and chairs will be built to promote chess playing.

The SCS Snorkel and Diving Club is hosting an ocean clean-up at the harbour on Friday and Saturday. A bike clean-up will be held at the school on Friday to inspect, clean up and repair bikes used in the triathlon. Also, some 50 air mattresses will be inspected on Saturday.

This will be the third year that Saba DOET is taking place. The event has been growing in size and popularity. In 2020, Saba DOET had 16 projects with about 200 volunteers.

Oranje Fonds is the organisation in the Netherlands that initiates the annual volunteer event throughout the kingdom. In Saba, the event is co-hosted by the Saba Lions Club and its members play an active role in the event.