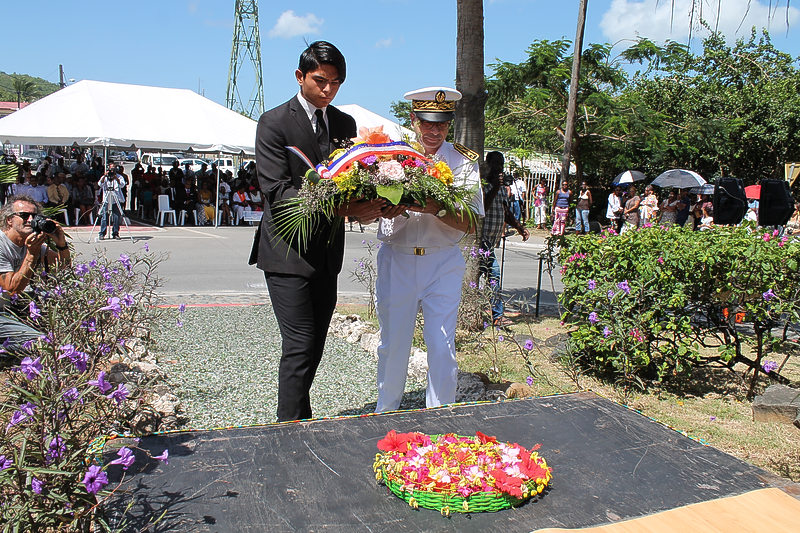 MARIGOT–The 169th anniversary of the Abolition of Slavery was commemorated at the Agrément roundabout on Saturday morning under the watchful eyes of Lady Liberty. This was the last ceremony to be held on May 27 as it will change by ministerial decree to May 28, the official proclamation of the end of slavery in St. Martin.

As usual the occasion was attended by Senior and Junior Territorial Council members and Vice-Presidents as well as Gendarmerie, Police aux Frontières, district councils and members of the Collectivité’s institutions. Also present was a group of students from Toulane University and their teacher who are studying cultural aspects of the island.

There were only two speeches, one by President of the Collectivité Daniel Gibbs, and the other by Secretary-General of the Préfecture, Thierry Mahler.

“Today we live in the comfort of a Republic that ensures democracy and equal rights to all its citizens but we must remember to teach new generations that this was not always the case,” said Gibbs. “For three centuries France profited from the slave trade and its treatment of blacks. That’s 300 years before humanity said ‘never again.’

“Today we respect those who fight against slavery. We remember with humility abolitionists like Victor Schoelcher and others. Their struggles, beliefs in human values, have allowed us to live in a Republic in which freedom and human rights are indestructible pillars. But even in this modern day and age, 20 million women, men and children around the world are still victims of various forms of servitude.”

Songs on the theme of slavery were performed by children from the after-school activity programmes. Dania Amacin read out a poem and Junior Carnival Queen Dorania Pascale sang an interpretation of Lino Hughes’ “St. Martin is my home.” The Grain D’Or dancers performed four themed dances.

Wreaths were laid at the foot of the Lady Liberty statue by President Gibbs and Secretary-General Mahler. As usual the event was accompanied by percussionist Hélier Coquillas.