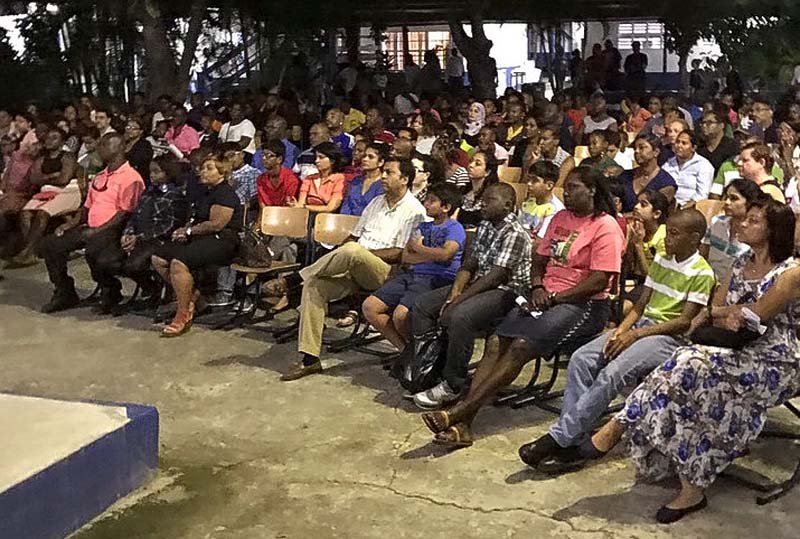 A section of the audience at the Academy open house.

The open house began with a short programme in the school’s courtyard and concluded with several guided group tours.

“St. Maarten Academy has a rich history as the largest and oldest secondary school on the island where English is the language of instruction. Beyond our academic achievements, we have garnered many awards in essay, debate, sports, and art competitions,” Principal Tallulah Baly-Vanterpool told attendees. A presentation was also made on Academy’s expectations, curriculum, culture and achievements. She encouraged parents and the 6 grade students to work towards attaining a combined average score of 70 per cent or higher to gain admission into Form 1 at Academy.

“At the St. Maarten Academy, we don’t only work to excel academically; we also work towards shaping character, promoting leadership and civic responsibility,” the principal said.

“We strive to create an atmosphere at our school where anyone can walk in and be greeted by a welcoming environment and say to themselves, ‘There is something special going on here! Learning is taking place here,’” Baly-Vanterpool said. She added that “St. Maarten Academy continues to excel academically. This year, we graduated the largest class of 106 CSEC students and 17 CAPE Students, with a 100 per cent high school passes and 90 per cent college passes. Fourteen out of 17 CAPE students received their CAPE Associate degree, two diplomas and one, a certificate.”

St. Maarten Academy is a diverse and accredited school with an average of 500 students.