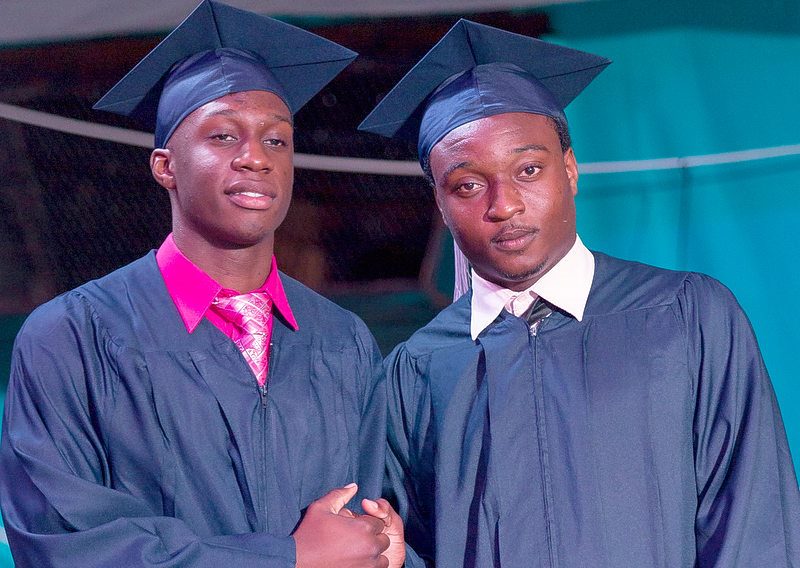 CUL DE SAC–St. Maarten Academy recently recognised the top performers of the Caribbean Examination Council (CXC) and has unveiled a new batch of scholars for its Wall of Achievement.

The students, who officially walked in a commencement ceremony in December, performed outstandingly in several categories after having written the Caribbean Advanced Proficiency Examinations (CAPE) and the Caribbean Secondary Education Certificate (CSEC) examinations in May/June 2016.

Students who are placed on Academy’s Wall of Achievement, which can be viewed upon entering the campus, must have secured Grade ones at CSEC or an A at the Cambridge Dutch examination. Only in rare cases are students with Grade twos recognised.

The graduate recognised for her ‘Outstanding Academic Performance’ was Candace Ford, who was valedictorian having gained the best CSEC passes. Ford passed 11 subjects with grade ones in six subjects, five of which are distinctions, four grade twos and an A in Dutch.

CAPE valedictorian, Maria Prince will once again grace the Wall of Achievement having been recognised with an Outstanding Leadership award as the Principal’s pick for being the most involved student who had taken on multiple leadership roles. She was one of 17 students who are considered trailblazers in St. Maarten, being the first on the island to graduate with CXC Associate Degrees.

Two of the graduates who were most involved in school activities, Brandon Blake, who is now continuing his education at the CAPE level and Oheny Loredent, shared the spot for Outstanding Contribution; while Tivona Trotman was chosen as Outstanding Athlete.

The school also recognised Outstanding Science student Mario Mills – currently enrolled in CAPE, since he attained the best passes in Biology, Physics and Chemistry; ‘Outstanding Language Student’ Candace Ford for securing the best passes in English and Spanish at CSEC, as well as Dutch at IGCSE.

The recognition for Outstanding Visual and Performing Arts student went to Kadyjah Lake, while Esther Dede was recognised for being the most Outstanding Math Student since she had secured grade ones Mathematics and Additional Mathematics. Dede walked as Second Runner-up Valedictorian in December. She, too, wrote 11 subjects, copping four grade ones, three of which were distinctions; five grade twos, one grade three and a C in Dutch.

The spot for Outstanding Business Student will be occupied by Jayni Suerno, who secured the best passes in Principles of Accounts and Economics. Suero, too, is currently enrolled in CAPE.

As first runner-up Valedictorian, she also passed 11 subjects with six grade ones, four of which were distinctions, four grade twos and a C in Dutch.

Achievement presented before the school’s student body at a special assembly, “reminded students of valedictorian Ford’s entreaty that they should all work towards their destiny despite the many challenges that they may face along the way,” Academy said.

“Challenges such as, sleepless nights to get SBAs in on time, or if you’re like me, early mornings – the many countless days of sleeping in class because you were up all night… Then the nerves we felt sitting in the gym as we were about to write our final exams,” Ford said.

She encouraged all that they should do everything with excellence. “Create a mentality to win. Say to yourself: “I will win no matter what it takes. I will succeed even if I can’t see it now. I always win, I never loose, I learn.” Find your purpose in life and hold on to it. Never let it go. Push toward that purpose. Never let anyone tell you, you cannot. It doesn’t matter if you fail, it matters how you deal with failure. Always remember the only person that can stop you is the person that appears in the mirror. And if you have faith in God you can always trust that He has your back no matter what,” Ford added.

The school’s principal Tallulah Baly-Vanterpool pointed out that the top scholars were part of one of the largest batches, if not the largest for the school, to sit a total of 17 subjects at the 2016 CSEC and CAPE examinations. All 106 CSEC students also sat the Dutch Cambridge examinations. Some 17 students sat the CAPE exams. When combined (CSEC and Cambridge), all wrote between nine and 11 subjects at one sitting.

“The performance of this class was outstanding in subjects such as English Language where 96 per cent of our students attained college passes, of this number 34 per cent of them scored grade ones. This trend was also seen in subjects such as Mathematics, Information Technology, Social Studies, Biology, Integrated Science and Additional Math, which all produced more than 90 per cent college passes. This was no easy feat for our teachers,” Baly-Vanterpool said.

The recognition of the top performers also underscored the school’s history-making moment in graduating the first batch of CAPE students on the island with Associate Degrees in multiple areas.