Home Headlines & Top Stories Academy teachers infuriated that Duncan was no show for meeting | THE... 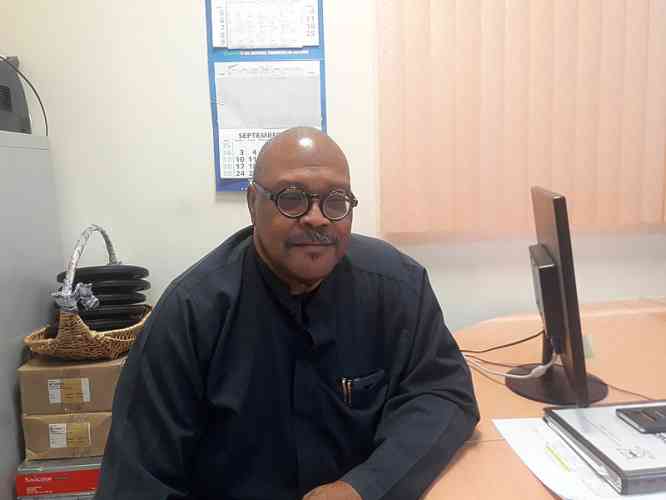 ~ Duncan apologises, says he was at urgent meeting ~

EBENEZER–Teachers of the two sections of St. Maarten Academy were infuriated with school board Chairperson Roland Duncan, who was a no-show at a meeting he was supposed to have with them mid-morning Thursday at the school’s Preparatory Secondary Vocational Education (PSVE) campus in Ebenezer.

Duncan told The Daily Herald last night that he had not shown up because he had to attend an urgent meeting with the contractor working at the school’s Academic campus about unforeseen issues that are being uncovered during the construction work. He apologised to teachers for bruising their “egos” by not showing up.

Teachers of both sections of the school gathered in the staff room at PSVE on Thursday in a united front hoping to hear directly from Duncan on the status of their 2019 vacation pay, which they fear will not be paid, and to get a chance to pose their questions to him on the matter. When it became clear that Duncan would not show up, PSVE teachers decided to continue their sit-in that began on Wednesday.

Duncan had to address teachers during the morning break, which runs from 9:30 to 10:30am.

Teachers of the school’s Academic section have joined the action with a “go-slow” in which they are not entering end-of-year exam grades on time, amongst other actions.

PSVE educators told this newspaper in a joint statement conveyed to the paper by one of the teachers that they are not happy with the board’s silence.

“The board refuses to answer their staff about when the vacation pay will be paid out. Teachers from both campuses gathered in the staff room … and Roland Duncan never showed up to answer their questions.

“Teachers need their money. They already worked for it. FAVE [Foundation for Academic and Vocational Education – Ed.] has mismanaged the government-issued funds and is ashamed to face the teachers,” the educators said.

“Where did the money go? Time has passed for protocols and formalities. Show us the money. Their position is that the money can be paid at any point in the second half of June. But we have no confirmation that it will be paid at all. There has been no communication from our board other than what we read in the media,” the PSVE teachers said.

Teachers of both schools are expected to meet again tentatively at 10:30am today to determine a united approach to this matter.

Duncan said the urgent meeting that kept him away from the appointment with teachers was with the contractor working at Academy’s Academic section about additional damage being uncovered as the work progresses.

“I am sorry to disappoint the egos of the teachers, but I had a choice about meeting with them or with the contractor on an urgent matter. I have sufficient witnesses to back me up that I was at that meeting,” Duncan, said adding that he doubts whether he can meet with teachers today, Friday, as he just received “some letters” from Education Minister Wycliffe Smith on the matter.

“I don’t think he [the Minister] understands our problem, or I get answers that tell me that government has no intention to deal with the problem. I just received two letters today [Thursday]. I am hesitant to meet the teachers because I can’t give them any clear-cut answers. They want to hear when they will get paid and I cannot tell them that. I can ‘take from Peter to pay Paul’, but then I will have to pay back Peter. They won’t care because they get paid, but I cannot do that because I will still have to pay back Peter.”

In giving an update on the effects of Thursday’s sit-in, PSVE Principal Lavern Nelson said examinations had been invigilated by teachers who made themselves available to administer and invigilate, and in one class, support staff were needed initially.

“As test week continues, all examinations were conducted and invigilated today. The final set of examinations to conclude test week will be administered Friday, June 21. This includes the one examination for the Form 1 level that was not administered yesterday [Wednesday], on account of the sit-in.

“Students who were sick or legally absent during test week will have the opportunity to make up on Monday, June 24, once the necessary paperwork has been submitted – doctor’s letter, for instance,” Nelson said.

Officials of Academy’s Academic section could not be reached on Thursday evening for comment on the go-slow at their school.