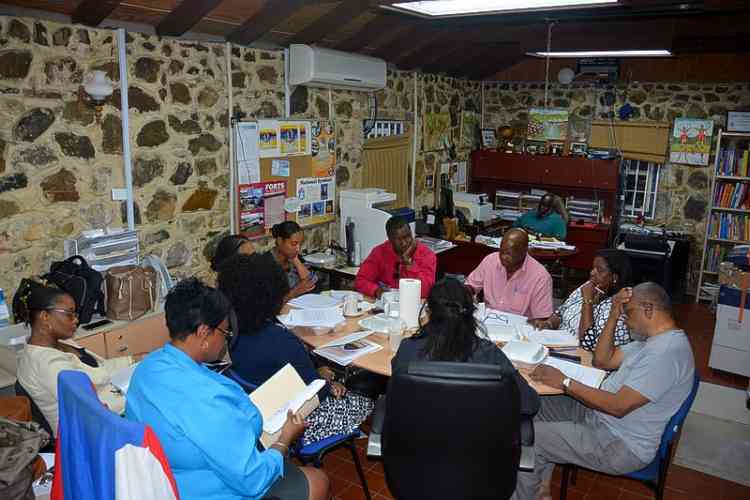 Foundation for Academic and Vocational Education (FAVE) representatives with senior representatives of both sections of St. Maarten Academy during a meeting at the Academic campus late on Monday.

CUL DE SAC–Increasing school fees, cutting staff and selling (instead of renting) textbooks to students are amongst a package of measures the two sections of St. Maarten Academy may have to take to combat the effects of government slashing it subsidy.

“We will try to follow the rules – last in first out. We will not rent books anymore. We will sell them. Now, if you want a book, you have to buy it. You will see an increase in school fees. We will charge extra for exams and if you do not pay your school fee, you will get put out of school,” Foundation for Academic and Vocational Education (FAVE) Chairperson Roland Duncan told The Daily Herald on Monday as he elaborated on some of the possible measures.

Based on a decision made in December last year and enforced at the end of February 2019, government has slashed the subsidy granted to the two Academy schools by approximately more than NAf. 2 million per annum, an average of NAf. 200,000 per month, Duncan said. Prior to the subsidy cut, the schools received an annual subsidy of NAf. 11 to12 million.

Duncan said this decision has some serious implications for the two schools, which now have to take measures to make up for the loss in subsidy. The board has since filed an administrative appeal for the minister to reconsider his decision. The board also met with senior officials of both schools on the situation late on Monday.

Elaborating on the implications of the subsidy cut, Duncan said “Out of NAf. 11 to 12 million a year, I’ve lost NAf. 2.5 million guilders. This means that about 20 per cent of my budget is gone. Most of the money, more than 50 per cent of our budget, is salary. We have to see where we can cut cost and where we can raise revenue. There is a chance that school fees will increase. I have to make NAf. 2 million guilders, and if I cannot make up the NAf. 2 million then I have to lay off people. It’s as simple as that.”

The measures will be taken at both schools, but predominantly at the Preparatory Secondary Vocational Education (PSVE) section of the school. Duncan made clear that no decision has been taken on how many staffers will be terminated as yet, so the figure of 14 staffers to be laid off is inaccurate.

“It is not as simple as saying 14 teachers. I do not know where these figures came from,” Duncan said referring to statements made over the weekend on the matter. “We are looking at both schools. However, most of the measures will unfortunately be taken at the PSVE. Enrolment at the vocational education school is down from 400 to 200-plus students. Meanwhile the academic section is growing to over 500 students. The subsidy is based on 800 students. The cutting has to be primarily the PSVE.”

Asked how many teachers are likely to lose their jobs in the process, Duncan said the two schools have more than 140 staffers, including teachers, administrative staff, cleaners and security, and, given that the schools have lost 20 per cent of their budget, if he has to do a straight-down-the-line estimation, it would be 20 per cent of the staffers.

“There are some teachers who have reached retirement age and we kept them on. We will try to retire depending on what courses they teach. Some courses are scarce. Then we have the ‘foreigner’ nonsense. If you have equal circumstances, then we will lay off the foreigner. That’s the logical approach to it, unless the foreigner is indispensable. From my perspective, we may have foreigners and local still affected because of what they are teaching.”

He spoke about other possible measures. “We will also have to go and reduce the number of courses we are giving. What courses am I going to cut? Although there has been a drop in enrolment at PSVE over the last four to five years and we have not laid off anyone, we need to now go back to streamlining. And streamlining also means classes.

“If I had four classes with 10 to 15 students in a class, we will now need three classes with 20 or 25 students because the Ministry of Education has been grumbling about the size of classes – that they are too small. By the class being smaller, we get to focus on students more. We have reached to a point where we have to reduce the classroom also. We have to cut back on the type and number of courses we are giving.”

He said that in addition to the slash in subsidy, government has instituted new requirements for the schools to follow.

“Government is trying to put all sorts of conditions, like they are doing anyone a favour,” Duncan said. “In the decree in which they cut the subsidy, they increased things that they want us to do such as … effectuate a new school plan. We have one already, but they want a new one. And we have no idea what it will cost us. You are cutting my budget and you also want us to drop our standards so that more students can be admitted, but you cut my money.

“What they [government – Ed.] have done is they took a decision, they never told us about it and if I look at our position, we will be short NAf. 2 million for the year because this decree went into effect August 1, 2018, but government continued to pay the regular subsidy so either we have to pay it back or it will be deducted from next year’s subsidies.

“The subsidies run from August to August, but the determination for the subsidy is done in December. The number of students seems to be the issue and Milton Peters College has always challenged government on this because we are required to do a lot of things.”

FAVE filed an administrative appeal against Minister of Education, Culture, Youth and Sports (ECYS) Wycliffe Smith, urging him to reconsider his decision to slash the subsidy granted for the two schools. The administrative appeal was filed at the end of March. At this stage of the appeal, FAVE has asked the minister to have a hearing with the board in which FAVE can further expound on its arguments, its position and on issues that are unclear in the decree.

“If the minister decides against what we ask, then I will go to court and it will be an administrative case,” Duncan explained.