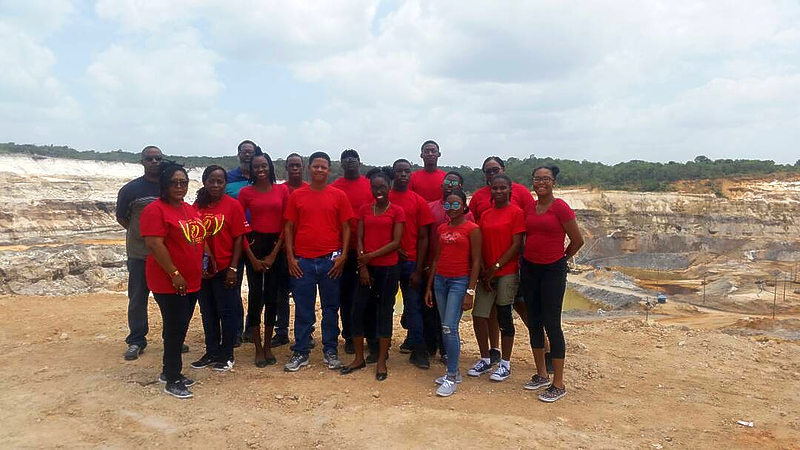 The students received first-hand experience in dealing with plants and animals, as well as other aspects covered in their modules such as genetic engineering, artificial insemination, budding and grafting, fermentation, X-ray florescent spectroscopy and thermodynamics – all of which will assist in preparation for their final examinations which started on Monday, May 8.

Arrendell, who also instructs in CAPE Physics, said the trip to the South American continent helped the young scholars to see certain concepts that were taught in the classroom. “When they went to the brass company [Brass Aluminum and Cast Iron Foundry – Ed.] they were able to see the transformation of various metallic substances from raw material to end product.

“They recognised the need to pay attention to the quality of materials in order to get the desired products. They were able to see regular people doing advanced physics,” Arrendell said.

In their exchanges with students and teachers of one of the Caribbean’s top high schools, Queen’s College (QC), the group saw the ingenuity of the Guyanese scholars and educators who were able to do much with little.

“That QC visit showed that even though the students have limited resources they were able to produce quality results,” said Mendonca, herself a Guyanese national.

During that visit the group had an opportunity to meet with the CAPE students who are taking the same subjects and were able to visit classes and interact with their teachers. They were able to share ideas and experiences. The students were engaged in a lesson given by the Biology teacher at the school. Their QC counterparts were able to give the Academy team a guided tour of the school. They made friends and promised to stay in touch.

At the Bosai bauxite mine in Linden, module 2 of their Chemistry and Physics syllabi came to life when the students were able to observe X-ray florescent spectroscopy, a technique used in the chemical analysis of metals, glass, ceramics and other building materials. They received samples of the different grades of bauxite.

“One of the technicians explained how and why they studied particular properties of the samples of bauxite. They put the samples into an X-ray machine and that machine uses the physics of X-ray diffraction, which was studied in the classroom. They were able to see the theory connected to practical work and the practical work connected to economics,” Arrendell added.

Another place of interest visited was distilling company Banks DIH, where the students were able to observe all operations. Fermentation in the winery and beer plant was their main focus.

At the Government Livestock and the National Agricultural Research Institute, the group was given hands-on experience in genetic engineering in animals and plants. Students had the opportunity to do some budding and grafting with plants that were available for that procedure at the time.

On a visit to the Essequibo Coast, they toured Imam Bacchus Rice industry, a poultry farm and a chow mein (noodle) factory.

During their time in Guyana and together with Anita Marshall, a Methodist Agogic Centre Comprehensive Secondary Education teacher who accompanied the group, visits were made to Minister of Business Dominic Gaskin; Director of Tourism Donald Sinclair; their various department heads; the Guyana Zoo; Giftland Mall, the largest shopping mall in the country; and First Lady of Guyana Sandra Granger.

At the President’s residence, Granger gave the visiting team a guided tour of State House and they all exchanged tokens. Mendonca presented Granger with a gift from the St. Maarten Tourist Bureau.

“In general, the students learnt a lot and they mentioned that they were motivated to become better persons in society. The things that they took for granted would not be taken lightly, but will make them become more innovative and creative in their classrooms. The experience gained will be for a lifetime,” said Mendonca.