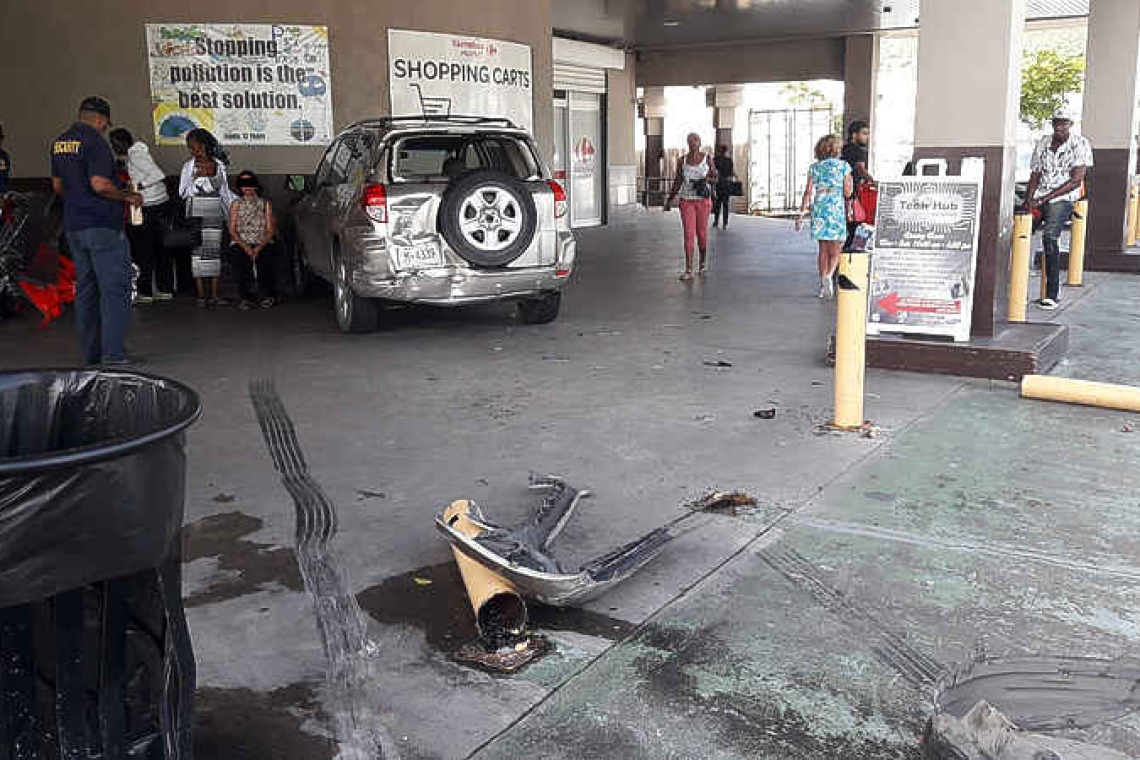 “I am in shock,” said the driver, who waited for the arrival of the police while sitting on a chair next to her car. (John Halley Photo)

PHILIPSBURG–An elderly lady panicked Monday morning when her Toyota RAV4’s accelerator stuck while reversing from a parking spot in the parking lot of Carrefour supermarket on Bush Road. Instead of engaging the brake, she put the car in drive, with disastrous consequences.

Various videos of the incident are circulating on social media. Bystanders could not believe their eyes as the car drove out of a parking spot and reversed into a U-turn, colliding hard into two parked cars, then sped forward towards the entrance of the supermarket.

Within seconds, the car collided with a car parked in front of the entrance, knocked over two metal poles and shot like a missile at two customers who had just left the supermarket. They could barely jump aside.

The car came to a stop against the facade of Carrefour, a few metres to the right of the entrance doors, slamming into the row of shopping trollies. The driver was miraculously unharmed.

The woman’s car was dented on all sides and lost the rear window. The cars she collided with were also heavily damaged. The driver of a commercial vehicle that was hit first found this minivan without a front bumper and right front lamp, and with a heavily damaged grille. The white Van next to it showed several dents and the passenger car next to this Van was scratched.

While the woman rammed into the passenger car parked just in front of the entrance to Carrefour, this car collided with the car parked next to it. Both cars are severely damaged.

Around 11:00am, when the events unfolded, an uproar arose among customers and employees of Carrefour who directly witnessed or heard by-standers scream. People panicked and ran into the parking lot and into the supermarket.

Carrefour’s General Manager Thilak M.V. Pillai was in his office when he received the call. “I immediately went to see what had happened,” he said, “Workers were panicked, customers who had seen it happen were very upset. I talked to them, to help them calm down. I also saw the lady. She was shocked.”

The management of Carrefour tried to reassure customers and called the staff present so that they could vent. “Several of them had been very close,” Pillai said, acknowledging it is a miracle of God that there were no personal casualties.

Carrefour employees have a habit of going outside during their break. “I have advised them to stay in the canteen from now on,” said General Manager M.V. Pillai.

For those involved in the accident, it was a mystery how this could have happened. “I asked the lady: were you sick?” said the owner of one of the badly damaged cars. “She replied: No, I am fine, but the car did not work. Nothing worked.” The lady looked confused, in shock, the car owner said. “I felt sorry for her. I don’t know what exactly happened with her car, but I really felt for her.”

Police are investigating how the accelerator of the Toyota RAV4 got stuck. It was not disclosed whether the pedal stuck down or stuck up.

Carrefour’s management will replace the barriers that have been knocked down with stronger posts or fencing. “We will study the camera footage thoroughly to see how this should be done,” said M.V. Pillai, who stressed that Carrefour intends to take measures to prevent an incident like this in the future.