Home Go SXM ACREW and partners donate US $4,000 to Home Away from Home Foundation... 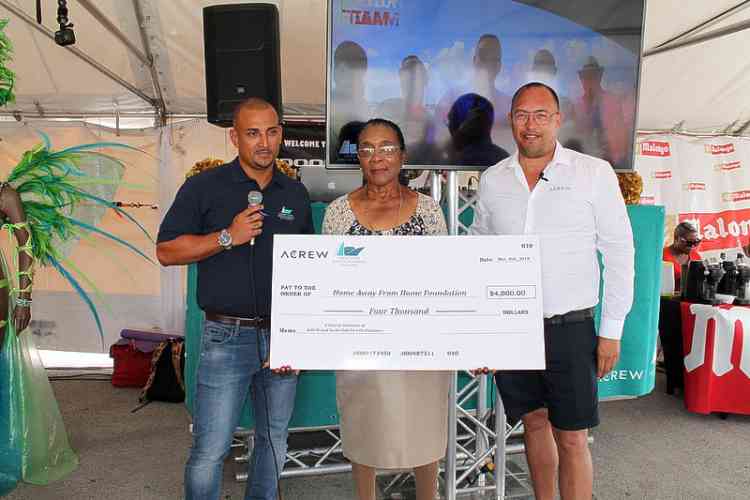 Yacht crew attend a workshop on Practical Care of Art on board. (Photo Robert Luckock)

COLE BAY–Organiser of the third St. Maarten Rendezvous super yacht event, ACREW, officially presented a symbolic cheque for US $4,000 to the Home Away from Home Foundation senior citizen’s charity on Friday, during the last day of the event at Yacht Club Port de Plaisance.

ACREW together with its partners engaged in the fundraising to assist St. Maarten following the hurricanes of 2017. At its final two events in 2017, ACREW’s business partners were invited to gift a contribution at each event. ACREW donated five euros for every crew member that attended. In the 2018, St. Maarten Rendezvous presented a cheque to Yacht Club Port de Plaisance to choose a good cause or charity in need, those funds were presented to President of the Home Away from Home Foundation, Patricia Flanders.

It was the third annual event hosted by ACREW and Yacht Club Port de Plaisance and the fourth year of ACREW’s partnership with the latter. ACREW has a membership of 14,000 super yacht captains and crew, and runs 15 events around the world during the year with all events having a focus on education. A number of workshops and seminars were held for crew at Yacht Club Port de Plaisance.

“It’s about putting the experts in their fields together with captains and crew to help them in their jobs,” explained ACREW joint owner and director Abi McGrath.

McGrath said she was “positively surprised” at the number of yachts that did come back to St. Maarten in 2018, although the numbers were obviously less.

“One month after the hurricane we organised with Port de Plaisance a seminar at the Monaco Boat Show to build awareness about the situation. Yachts were very nervous, particularly about damaging their vessels in the Lagoon, the general infrastructure and amenities, but the yachts that did come back sent back a positive message.

“So, confidence was rebuilt in 2018. St. Maarten continues to be unique for the yachts with the proximity of the airport for owners, St. Barths and the top-level professional services on offer here. It does make St. Maarten one of the top super yacht hubs in the world. Yachts are reassured, that’s proven now.”

Also, there for the presentation was Michael Ferrier whose company NAPA was sponsoring the afternoon’s Scavenger Hunt and Minister of Tourism Stuart Johnson, who praised the excellent initiative of the organisers.

“I welcome all the captains and crew of all the vessels here. We thank you for the confidence in the destination and look forward to you coming here again and again. St. Maarten depends on you. Every sector of this country appreciates your visits from restaurants, supermarkets, night clubs, taxis and more. And to the team here at Yacht Club Port de Plaisance continue to do the awesome job that you do. I’m proud of you and look forward to your further developments and visions.”