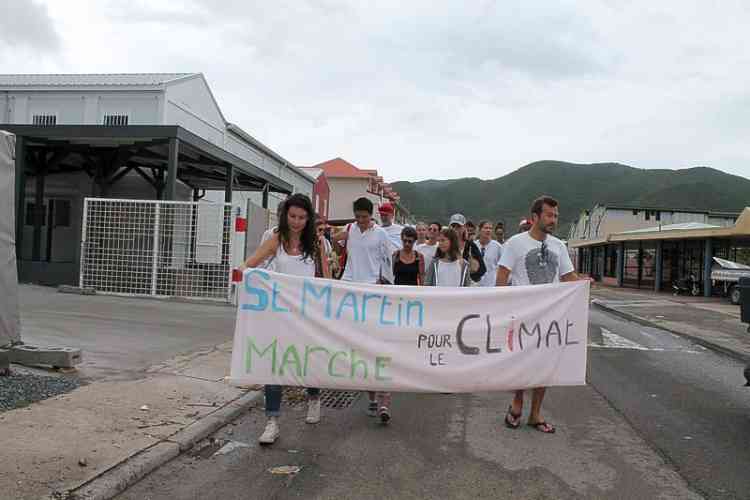 MARIGOT–A group of concerned environmentalists and a Facebook group “It’s about time St. Martin” staged a march in Marigot on Saturday morning to raise awareness of climate change and the consequences of global warming. Due to the inclement weather fewer than 50 persons turned out.

The march was coinciding with a national movement in France to raise awareness of climate and biodiversity, grouping citizens, associations and political parties in 66 towns.

The march started from the new Préfecture in Concordia, proceeded along Rue de Hollande, turned right into Rue de République, left into Rue de la Liberté, and arrived in the garden of Hotel de La Collectivité for a pause, where participants could debate among themselves about climate change.

A handful of elected officials were on hand to support the initiative. The marchers then proceeded to the Préfecture to deliver their message.

St. Martin/St. Maarten has its own challenges to reduce its carbon footprint while the world at large is seeing more frequency of intense hurricanes, earthquakes, fires and floods.

The Huffington Post quoted the new report issued by the Intergovernmental Panel on Climate Change (IPCC), the leading United Nations consortium of researchers studying the speed and scope of human-caused temperature rise.

“Keeping temperatures from rising beyond the Paris agreement’s ambitious target will require unprecedented social changes,” the report stated. “The world is rapidly running out of time to scale back greenhouse gas emissions, dimming hopes of keeping global warming within 1.5 degrees Celsius (2.7 degrees Fahrenheit) above pre-industrial levels, beyond which catastrophic planetary changes are forecast.

“This is one of the most important reports ever produced by the IPCC, and certainly one of the most needed,” Hoesung Lee, the chair of the body, said at a press conference in South Korea recently. “Climate change is already affecting people, livelihood and ecosystems all around the world. Every bit of warming matters.”