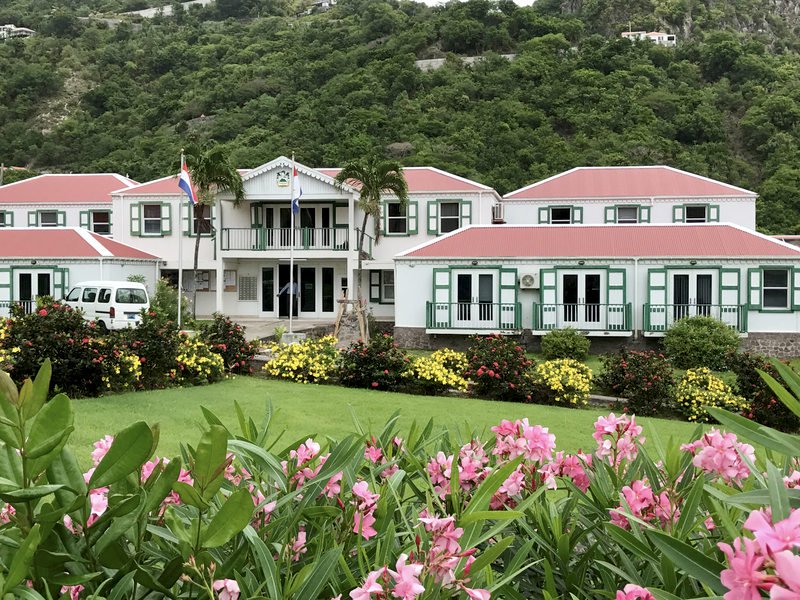 The Saba Government Administration Building in The Bottom. (File photo)

THE HAGUE/SABA–The Committee for Financial Supervision CFT is advising a suspension of the repayments of the Dutch interest-free loans for Saba in 2018. It concerns an amount of US $440,000 which, in the opinion of the CFT, would put a strain on Saba’s cash position.

The 2018 draft budget of the public entity Saba shows a deficit of $445,503. Almost the entire amount concerns repayments of interest-free loans supplied by the Dutch Government. According to the CFT, the repayments in question should not be qualified as liabilities. By correcting this, the 2018 budget deficit would only amount to $5,503.

To prevent that Saba has to consume its already strained cash reserves, the CFT advised requesting that the Ministry of Home Affairs and Kingdom Relations BZK suspend payment of the repayments on the interest-free loans in 2018. The 2018 draft budget shows US $10.67 million in revenues and US $11.11 million in expenditures. The financial supervision law does not allow a budget deficit.

The CFT concluded that Saba was unable to include the financial implications of Hurricanes Irma and Maria in its 2018 draft budget, which was received on October 11. “Saba is unable to free up funds for the reconstruction or for a possible decline of local revenues,” stated CFT Chairman Raymond Gradus in a letter to Saba’s Executive Council on October 25.

The CFT fears the consequences if Saba were to receive insufficient (financial) support from the Netherlands for the island’s recovery and the mitigation of the adverse consequences of the hurricanes, because the current draft budget offers no room to completely compensate this financial blow. “The CFT sees this aspect as a risk for the execution of the 2018 budget.”

Gradus remarked, as he had done in an earlier letter, that the hurricanes caused much damage to Saba. According to a preliminary estimate, the damage amounts to some $27 million. The BZK Ministry, the Saba Government and the different Ministries are discussing the manner in which the reconstruction will take place.

In a letter accompanying the 2018 draft budget, the Executive Council made an urgent call for an increase of the so-called free remittance (“vrije uitkering”) the island receives from the Netherlands to cover a number of expenses. The Executive Council explained that “despite diligent efforts,” it has been unable to carry out its legal tasks within the financial scope.

The Governing Accord states that the Netherlands commits to provide a more “realistic” maintenance budget for the investments it makes in the Caribbean Netherlands. The CFT promised to remind new State Secretary of Kingdom Relations Raymond Knops about the urgency of this matter.

Saba reserved $390,000 for maintenance, which is insufficient for solid upkeep of the island’s infrastructure. The largest maintenance cost, about $350,000 per year, is for the harbour. “Saba is unable to provide for these maintenance expenses on a yearly basis,” stated the CFT. A maintenance plan is being drafted for the airport in consultation with the Ministry of Infrastructure and Environment.

Gradus lauded Saba for presenting the draft 2018 budget so soon after it was hit by two hurricanes, and once again commended the Island Government for having improved its financial management over the years, which has resulted in multiple positive audit qualifications of the annual