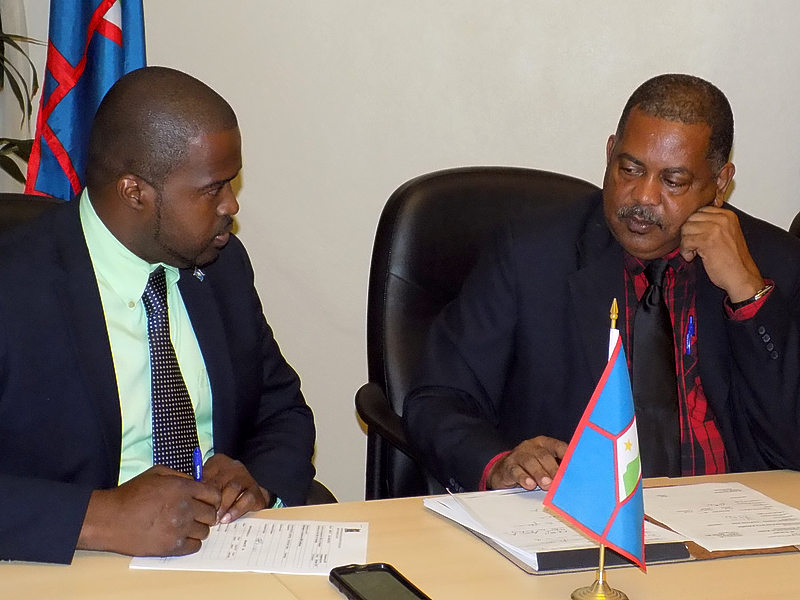 ST. EUSTATIUS–Commissioner Charles Woodley announced late on Thursday that, on the instruction of the Kingdom Representative Gilbert Isabella, Governor Julian Woodley refused to sign the decision by the Executive Council to approve the agreement with NuStar, as well as the agreement itself, without any explanation.

With their actions, Woodley said, both the Kingdom Representative and Governor have violated the WolBES by obstructing the execution of a lawful decision of the Executive Council.

The Governor is legally obligated to sign all decisions taken by the Executive Council, even if he did not vote in favour or disagrees with the decision taken by the majority of the Council members, Commissioner Woodley said in a press release issued by his office. If the Governor is of the opinion that a decision is unlawful, he can then send it to the minister of BZK via the Kingdom Representative for annulment, Woodley said.

This latest development, Woodley said, does not come as a surprise. Since the negotiations with NuStar resumed in early December 2016 and good progress was being made, the Dutch Government has been attempting to interfere with the process without being transparent about their true motives. It started with their insistence on appointing a mediator despite the fact that both the Statia Government and NuStar indicated that such assistance was no longer needed, he said.

He said that as the negotiations progressed and neared completion, the Dutch Government suddenly seemed to become concerned about the harbour and marine environment legislation related to the agreement with NuStar. This despite the fact that from the onset they have been involved with and had knowledge of the contents of said documents, including providing legal assistance to prepare said legislation, he explained.

Woodley said: “Strangely enough, the Dutch Government never substantiated these concerns, and maintained that they were happy that an agreement was being reached and the relationship between NuStar and the Government of St. Eustatius had improved.

“On Tuesday, the acting director of Kingdom Relations sent a message to the Government on Tuesday afternoon, stating, among other things, that despite not having knowledge of the content of the agreement, and being pleased about the progress of the negotiations, he had ‘concerns’ about the risk said agreement might create for the Island Government.

“Today, Thursday, the Kingdom Representative called me and confirmed that, although there were no legal or other objections against signing the agreement, he insisted on having a legal advisor from one of the Dutch ministries review it prior to signing.

“I told him that this was not needed, because the same law firm who represented the Dutch Government in the court case which NuStar filed (and lost) against the Dutch Government a few years ago had reviewed the current agreement on my behalf together with the legal team of NuStar, that agreement had been reached, and signing could take place today.”

He said NuStar also had confirmed to him on Thursday that they had informed their representatives in the Netherlands that all was well, upon which said representatives confirmed that the Dutch Government had no objections to the agreement and that signing it lies within the competence of the local Government.

Woodley said that based on the above, it is clear that the instruction of the Kingdom Representative to the Governor to not sign a lawful decision of the Executive Council, without substantiation or a written instruction from the Minister of BZK, is aimed at delaying the signing of the agreement with NuStar, and thus tantamount to undue interference with internal affairs of the local, democratically elected Government.

As a result of said interference, Woodley explained, NuStar has decided to postpone signing the agreement until they have received clarity on the Kingdom Representative’s actions. Unfortunately, but predictably, the latter could not be reached to give an explanation, Woodley said.

He said that although not surprising, it is very disappointing to see how the Dutch Government tries to boycott any positive development that this Government achieves on its own strength. This includes, he said, being able to raise considerable additional revenues for the budgets of the next 10 years by signing the agreement with NuStar.

Woodley said: “Clearly they need to perpetuate the negative perception they have been trying to create about the island, the Government and its people, and prevent themselves from being exposed as unreliable, in-transparent, and of bad faith.

“Commissioner Simmons and I will consider the options on how the proceed in consultation with NuStar.”

He said this could include a formal investigation into the actions of both the Kingdom Representative and the Governor, and subsequent legal actions by the Government of St. Eustatius.

He finished off by saying the Government of St. Eustatius will not accept or be deterred by the Dutch Government’s continuous attempts to hinder the progress of the island and its people.