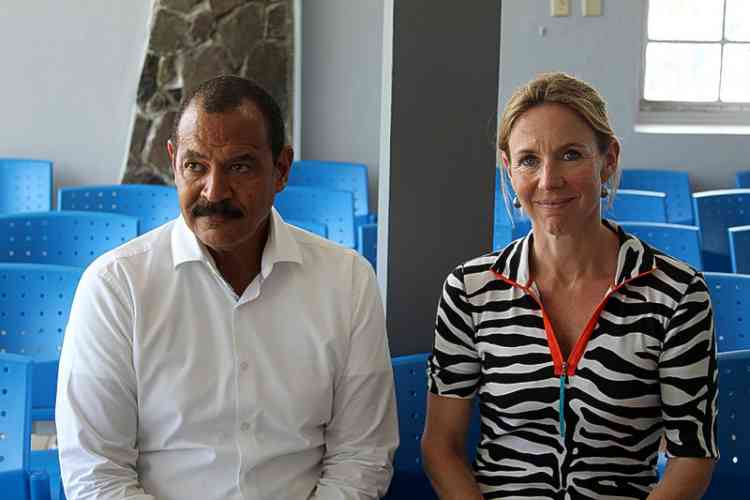 Van Veldhoven’s visit to St. Eustatius on Monday and Tuesday allowed her to see with her own eyes what is really needed on the island and what the Dutch government’s contribution has been in relation Statia’s development, Franco said.

This was Van Veldhoven’s first visit to Statia and she said she was “amazed” at how beautiful the island is.

“Waste management is an essential element, and I was very pleased to see all the progress that has been made in preserving the natural beauty of the island, as this could be the main driving point for tourism, the economy and jobs on the island,” she said.

Many issues were discussed with the public entity St. Eustatius during her visit and Van Veldhoven said she was looking forward to “continued cooperation” pertaining to waste management, coastal management and nature-related topics.

Asked about whether funding would be made available for expansion of the cliff-erosion project, she said she acknowledged the problem with erosion. “It is good to assess and discuss different forms of different solutions to prevent further erosion,” Van Veldhoven said.

She considers projects such as water catchment, for example, or using water for irrigation purposes to water plants and vegetation, important elements in preventing erosion. These methods and other preventative measures were discussed during her meetings with stakeholders on the island, she said.

Asked about the water rationing and whether an additional water-storage tank would be constructed to limit the need for water rationing by St. Eustatius Utility Company STUCO, Van Veldhoven said she “fully understands” that this is “a big concern for everyone on the island. This is one of the items we discussed to try to address this problem.”

She closed off by saying that her trip was “very wonderful,” as it gave her “some good insight” into what topics are important to people living on the island.

Follow-ups on these topics will be carried out, during which the Dutch government and the public entity will continue to work together on a number of issues, “so that we can make sure that we tackle the problems that people face every day,” Van Veldhoven said.