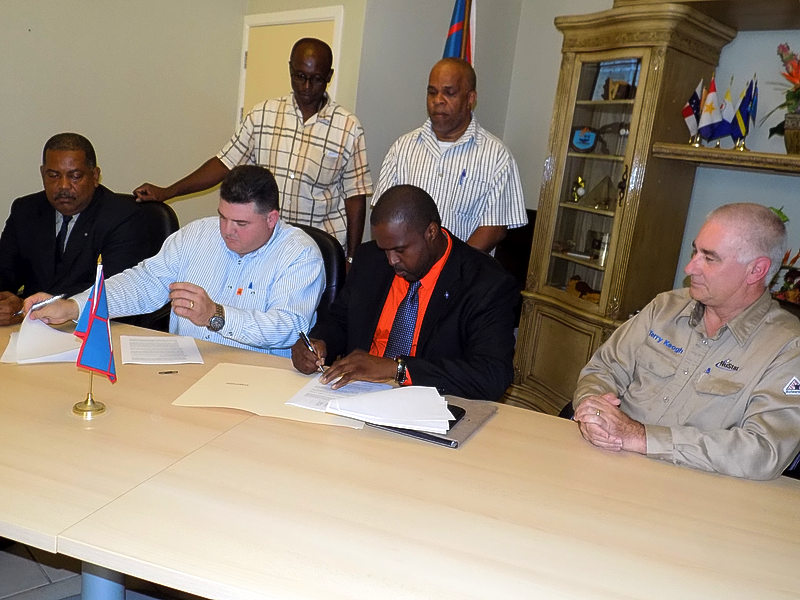 ST. EUSTATIUS–Despite the instruction of Dutch Government’s Representative in the Caribbean Gilbert Isabella to Island Governor of St. Eustatius Julian Woodley not to sign the Executive Council’s decision to approve the agreement with NuStar, and the request filed by the Ministry of Home Affairs and Kingdom Relations to ask the State Attorney of the Netherlands to provide and advice on the matter, the Executive Council and NuStar signed the agreement on Friday.

The agreement initially was to be signed on Tuesday, but due to an issue with the wording in the contract the signing was rescheduled for Thursday. Commissioner Woodley said that the initial delay was due to lawyers on both sides disagreeing on one word in the agreement.

After the lawyers of both parties had agreed on the language and that it was okay to go ahead with the signing, Island Governor Julian Woodley, on Thursday, informed that he was instructed by Isabella not to sign the agreement. Isabella requested that the documents be sent to him so that he and lawyers at the Ministry of Home Affairs could look over it. Therefore, the signing was put off until a later time.

Commissioner Woodley said a lot of people have made sacrifices to come to an agreement between the Public Entity and Nustar. “It has been a long week to reach this point,” he said. “It is a good agreement for Statia and its people as a whole and also for the future development of the island.”

He said the company is “very glad” to see the agreement completed. “The agreement gives us long-term viability on the island and we plan to be here for a very long time.” Commissioner Simmons said it was a “very momentous occasion” for everyone involved and he was very honoured to be part of it.

In the meantime, the Ministry of Home Affairs and Kingdom Relations requested the State Attorney of the Netherlands to look into the agreement between Statia and NuStar and to provide and advice on the matter. In a brief statement issued by Government Service Caribbean Netherlands RCN on Friday, it was stated that it is in the interest of the development and future of the Public Entity and its population to reach good contractual agreements with NuStar.

“All efforts are directed towards reaching accurate and legally correct agreements in order to reach clarity for all parties about the content and scope of the new arrangements. This is a 10-year agreement that not only touches St. Eustatius and NuStar, but also areas of several ministries. Therefore, the Ministry of Home Affairs and Kingdom Relations has asked the State Attorney to look at the agreement and provide an advice,” the statement said.

In a letter sent to the Executive Council on February 1, State Secretary of Economic Affairs Martijn van Dam threatened to suspend or annul the 2015 amendment to the St. Eustatius Marine Environment Ordinance which reduces the National Marine Park by some 20 per cent.

The Statia Government denounced the warning and said it has acted according to the existing laws and regulations. The Island Government expects to gather a minimum of US $3.8 million for the island under the agreement.