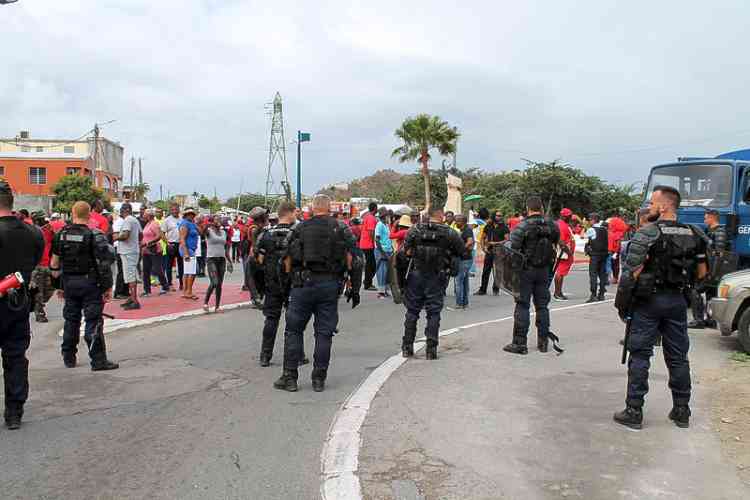 The scene at the Agrément roundabout Thursday morning with protestors and Gendarmes. (Photo Robert Luckock)

MARIGOT—Demonstrators taking part in the general strike in Marigot called by the unions occupied the Agrément roundabout Thursday morning for some three hours, preventing any vehicle access to Marigot and in the other direction to Rambaud and Grand Case, leaving motorists no option than to turn around or wait for hours.

Around a hundred demonstrators had gathered at the taxi stand on the Marigot waterfront by 7:00am before marching along the Galisbay back road towards the Agrément roundabout. A smaller than expected number of participants suggested a division among unions as not all of them supported the cause.

Attempts to block the main roads occurred as early as 5:00am as Gendarmes reacted swiftly to remove barricades composed of pallets, a car wrecks and rocks in St. James and Galisbay. Two persons were held by Gendarmes following altercations, namely Jean-Sebastien Hodge and Victor Paines from Soualiga United Collective, but were subsequently released.

There was a heavy Gendarmerie presence at the roundabout but Gendarmes acted with restraint not to provoke a more serious situation. Lt. Col. Sébastien Manzoni was seen frequently in dialogue with protestors in what were mostly cordial exchanges. The march and the protest at the roundabout passed off peacefully despite one or two confrontational verbal exchanges with Gendarmes.

One or two scooters or cars attempted to pass through the roundabout and were told by protestors in no uncertain terms to turn around and leave. Only emergency vehicles were allowed access. A small bus containing school children from Emile Choisy School returning from an outing in Friar’s Bay was not allowed through. The teacher was forced to escort the children on foot to the school.

Various union members spoke at the roundabout to get their message across to the population and to demand opening of negotiations with the Collectivité and Préfecture. They declared the turnout a success, saying today’s strike action was “just the beginning.”

The unions requested a meeting with Préfète Sylvie Feucher. This was granted verbally but they wanted written confirmation. Confirmation was then sent by email which was accepted. The meeting is to be held today at 5:00pm at the Préfecture.

The roundabout was finally reopened to traffic circulation at midday. The march then continued with stops planned at the Bethany Home, the Rectorat, the Collectivité, and other locations to submit the union’s grievances.

January 20, 2022
0
Prime Minister Silveria Jacobs.  ~ MPs happy, but cautious ~PHILIPSBURG--The Dutch Ministry of Interior Affairs and Kingdom Relations BZK will give a positive advice to St. Maarten’s request to deviate from the balanced budget norm, and this request will...
Read more