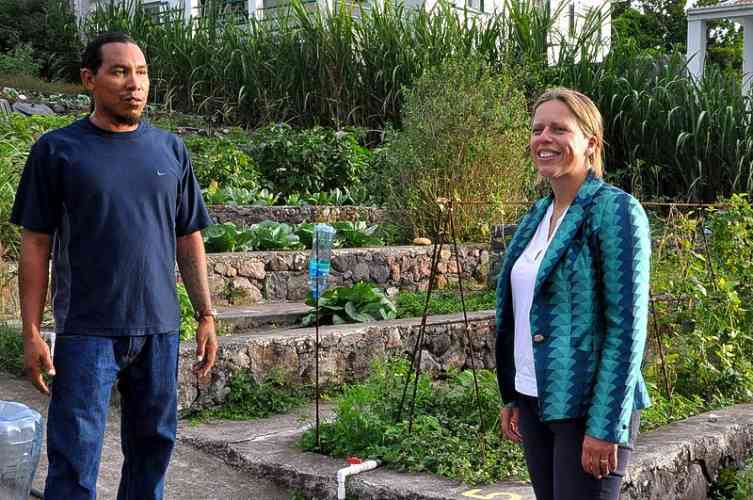 Minister Carola Schouten (right) visiting the organic agricultural project The Garden at The Level where she received an explanation from manager Sam Frederick.

Minister Carola Schouten (left) during an island tour made a stop to get a general view of the Under the Hill social-housing project, with Island Governor of Saba Jonathan Johnson (right).

SABA–Minister of Agriculture, Nature and Food Quality Carola Schouten arrived in Saba on Sunday. She will stay on the island until Tuesday, during which time she will visit various agricultural projects, the harbour, the Saba Conservation Foundation (SCF) and have a meeting with both the Executive and Island Councils.

On Schouten’s arrival on Saba on Sunday afternoon, when she was received by Island Governor Jonathan Johnson and Island Secretary Tim Muller, she was given an island tour that included several stops, including a view of the Under the Hill social-housing project.

This is Schouten’s first visit to Saba since her appointment as minister in the Rutte III cabinet in October 2017.

Schouten and her delegation paid a visit to The Garden at The Level, where manager Sam Frederick gave background information on this special agricultural project which serves as a social workplace for currently seven persons.

Frederick explained that the fresh organic produce from The Garden is sold at the market in Windwardside on Wednesdays and that home deliveries are made on Tuesdays. There are plans for a second market in the future, which would be in The Bottom on Fridays.

Before travelling on to St. Eustatius on Tuesday, Minister Schouten will climb Mount Scenery and visit The Farm at Hell’s Gate.