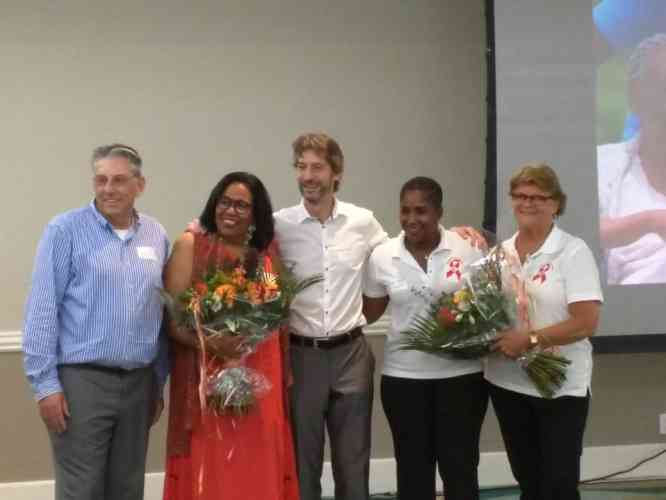 PHILIPSBURG–St. Maarten AIDS Foundation is one of two foundations in the Caribbean part of the Dutch Kingdom that has made it through to the regional qualifying round of the Appeltjes van Oranje 2019 Award.

The Foundation will be competing with Dutch projects which will be presented in the Netherlands in January. The final winners from the Caribbean and Netherlands will be notified in March and will be invited to attend the award ceremony with King Willem Alexander and Queen Maxima in May 2019.

The other foundation from the Caribbean part of the Kingdom that qualified is “Tur ta Konta,” which is based in Curaçao.

St. Maarten was “well represented” at the regional qualifying round, which was held at Hilton Hotel in Curaçao this past Sunday. Representing St. Maarten AIDS Foundation were Director Judith Martin-Bell and Project Coordinator Liska Busby. Other St. Maarten organisations that were competing for the qualifying round were K1 Britannia, Voice of the Youth Foundation and Player Development. A total of 10 organisations competed over the weekend.

The theme for this year’s awards was volunteerism. St. Maarten AIDS Foundation thanked volunteers who facilitate the Real Talk, Girl Power and Booster Programmes to high school students, American University of the Caribbean (AUC) School of Medicine student volunteers who assist the Foundation during its free HIV testing events, and its youth wing members, who also volunteer.

Fleur Hermanides, the local project coordinator for Samenwerkende Fondsen Cariben/Cooperating Foundations for the Dutch Caribbean of which Oranje Fonds is one of the founders, was proud and humbled to see so many initiatives from St. Maarten make it this far, true recognition of all the hard work non-governmental organisations (NGOs) and their volunteers do for St. Maarten society.

The Samenwerkende Fondsen representative congratulated all the semi-finalists, especially St. Maarten AIDS Foundation, on this great accomplishment, and recognised the great work they have been doing for the community for so many years, especially in times when it has been very hard to find adequate support to tend to the needs of their target groups.

Oranje Fonds, which is one of the six funding agencies forming the Samenwerkende Fondsen Cariben (SFC), has a history of supporting social initiatives in the Netherlands and the Caribbean part of the Kingdom.

More than 20 million euros has been invested in supporting initiatives that allow for people to meet each other, feel less of a sense of loneliness, understand each other and make an effort for one another since the inception of SFC in 2004.

If someone is interested in learning more about these initiatives or the opportunities SFC has to offer, contact